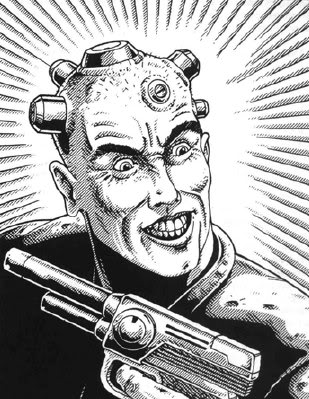 The crazy receives a nano cybernetic enhancement that completely rewires the human mind down to the neuralogical level. They gain several abilites right off the bat, the crazy can or may the character  take two Significant Actions and two Minor Actions (or five Minor Actions) in each combat round, though this does not allow a character to move further than 12 meters in a single round. They also have enhanced senses gaining a +2 DMR to all tracking, physical actions involving thier senses. The Crazy can hear a conversation over a hundred yards away with their enhanced senses.
The crazy also gains the equivelant enhancements or mutations  of robust & permanently gain 2D additional endurance.And once per day the crazy  can also        enter a trance that gives the abilities of the fast healing mutations heal minor Wounds immediately after combat &  heal severe wounds in 2D days.

The crazy will gain 1d4 minor mental mutations see Cepheus Atom for details.The crazy will develop mental problems associated with their enhancements within 2d6 months & their intelligent scores will go down by 1d4 points reflecting their slide into insanity. The crazy also gains the mutation of biazzare appearance. The crazies as a whole are percieved as powerful but very dangerous. Many communities of the wasteland want nothing to do with crazies as they sometimes cause as much destruction as they prevent. The slide into utter insanity makes these enhanced beings both a tragic thing to watch & simply another legacy of the ancients.