One of the more dangerous mutated monsters that came about because of the Mythos wars of the twenty forth century. These horrors combined the worst aspects of men, spiders, and the demonic. These horrors are often crossbred by the wizards of certain Mythos cults and sold to Drow space pirates. But they are normally native to the horrific supernatural plane The Beyond where they prey upon anyone foolish enough to be caught by these predators. They are ever so adaptable and make their nests in a wide variety of locations.
These horrors make their home in former high rise and skyscraper ruins where they prey upon the locals from their nest points. They are vicious predators likely to found in dungeons & ruins due to their adaptability. The giant abyssal  moth men attack with a hidden stinger tail and vicious clawed hands able to rend metal, flesh, and bone with a single swipe. 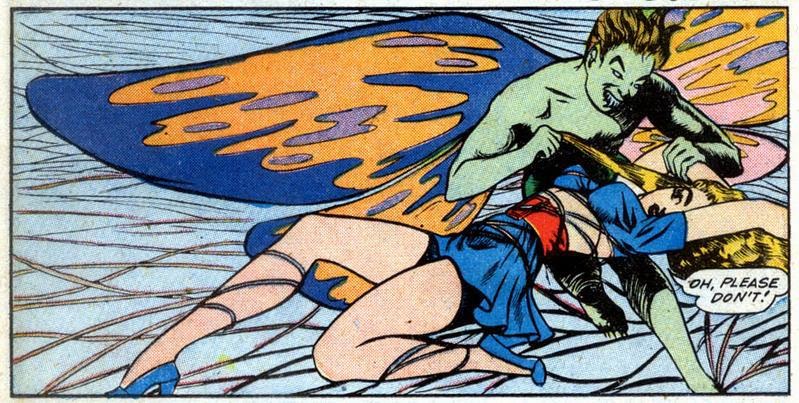 Frequency : Uncommon on certain
outer solar system worlds
No Appearing: 1d6
Move: 15"
Hit Dice: 5+5
% In Lair: 20%
Treasure Type: D
No Of Attacks: 3
Damage/Attacks: 1-10/1-10/1-4
Special Attacks: Poison Sting
Special Defenses: None
Magic Resistance: Standard
Intelligence: Low
Alignment: Chaotic Evil
Size: M
Psionic Potential: Non
Attack/Defense Modes: Nil
They attack with two vicious claws and then a quick sting from their tails. The victim hit by their sting takes 1d4 points of damage and must save vs poison or die immediately. The victims insides melt as the vicious poison goes about it's work. Because of the Abyssal  nature of these creatures they have several weird mutations including have a web generating set of organs  that allows the spinnerets under the arms to produce a strong web. Only those with 18 or better strength may break the webs in a round or with a 17 strength in two rounds. Usually prey is stung to death long before this happens.
The giant Abyssal moth men are clumsy flyers and have flight class C abilities at best. Because of the weird nature of these monsters hypernatural senses they are able to sense weakness and are drawn to the chaotic nature of human and near human beings. Wizards and black occultists of certain insane Lovecraftian gods from the Outer Worlds often turn their enemies into these creatures through ancient and lost rites of the blackest magicks.