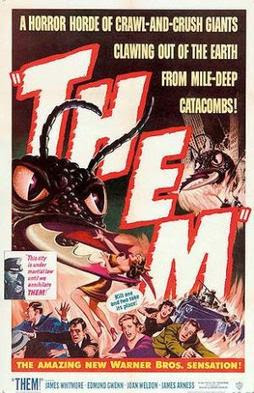 Out in the post apocalyptic wastelands there are giants that hunt among the wastelands, giant mutated horrors from another era that hunt the wastelands. Here are five of my favorites that work very well in old school rpgs and retroclones such as Gamma World, Mutant Future, and with a bit of modification Mutant Epoch.
Them from 1954 is one of the best monster flicks of all times. Giant ants, fighting through the tunnels of the underground with flame throwers, the mystery aspect of the film. Many of these themes we would later see in such films as Aliens and countless monster flicks.
Classic stuff and still very useful for a reference point for old school post apocalyptic campaigns.

When it comes to deadly dungeon and ruin crawling, Them is a great resource from the deadly mutated horrors bursting through settlement walls to full on assaults you can't beat giant ants for deadliness.

I've used Them countless times and every single time the players didn't see the giant ants coming until it was too late. Avoid the sugar bit and go for the gusto when running encounters with these giant mutated insect horrors.
Here's another forgotten gem from 1957. The Deadly Mantis is perfect for delivering the goods to your old school post apocalyptic filled campaign.
The Deadly Mantis 1957

One of the later 57 monster flicks this one has lots of effects, panic, campy lines, and a great prehistoric monster that is perfect to unleash on your unsuspecting mutant adventurers. The monster makes a great mid level monster for a higher level group of adventurers who have dealt with other monster menaces.

Nineteen Fifty Five's  Tarantula always brings out the big guns from PC's, don't ask me why but giant spiders are one of my favorite horrors to unleash on mutant adventurers and every single encounter unleashes as hail of post apocalyptic military grade weaponry. I've always unleashed little ones that the giant spider has secreted away before unleashing mamma upon the PC's.
Giant spiders are a great way for PC's to waste a ton of those powerful artifacts before setting them up for a deadly encounter.

There was something in the air in 1955 because we got It Came From Beneath the Sea, this time a mutated octopus that changes the San Francisco skyline by tearing apart the Golden Gate bridge. Its an excellent monster to run on any coastline though and most players have forgotten about this wonderful film from the mind of Ray Harryhausen.

Clever, entertaining, and mostly forgotten is a giant monster flick that demonstrates how one monster and its spawn can dominate an entire campaign. The Beast From 20,000 Fathoms is a great example of a flick that plays with its audience while sending the characters running. A great flick to pull ideas from. The plot points, monster, and setting material are perfect fodder for a group of PC's to deal with. This film will keep a party busy for months as the Beast rampages across the mutated landscape.
The Beast From 20,000 Fathoms 1953