"Great was Ossaru, being both king and wizard. He ruled over half the continent of Zothique. His armies were like the rolling sands, blown by the simoom. He commanded the genii of storm and of dark-ness, he called down the spirits of the sun. Men knew his wizardry as the green cedars know the blasting of levin."

When it comes to Clark Ashton Smith's far future Earth setting  Zothique  'The Tomb Spawn ' is an old favorite & the inspiration for numerous Castles & Crusades adventure forays. A highly of this appendix S&S ( Sword & Sorcery) Weird Tales is  the Ghorli. These monsters are are heavily featured in the D20 Zothique setting book.
The question remains as to what sort of undead horrors these former humanoid things actually are?!  According to GR Hager the author of the D20 Zothique setting book the following comes to us through the Ghorli entry; "Small Undead Hit Dice: 2d12 (12 hp) Initiative: +2 (Dex) Speed: 30 ft. AC: 13 (+3 Dex) Attacks: Bite +3 melee; 2 claws +1 melee Damage: Bite 1d4+3, claws 1d2 ea. Face/Reach: 5 ft. by 5 ft./5 ft. Special Attacks: Stench Special Qualities: Undead, +1 turn resistance, Darkvision 10 ft., receive double damage for all non-magical attacks Shaman spells: Darkness, Create More Ghorii Saves: Fort +0, Ref +2, Will +3 Abilities: Str 9, Dex 16, Con -, Int 9, Wis 12, Cha 12 Skills: Climb +6, Escape Artist +6, Hide +6, Jump +6, Listen +6, Move Silently +6, Search +6, Spot +6 Feats: Multiattack, Weapon Finesse (bite) Climate/Terrain: Any desert, ruins, and underground on the greater continent Organization: gang (2-6), pack (7-19), band (20-60), horde (60-100) Challenge Rating: 1 Treasure: Conditional (see below) Alignment: Always lawful evil Advancement: 3-6 HD (Medium-size) Ghorii speak to each other in a language of hoarse coughing and spitting. Ghorii are devilish undead that appear in a gaunt, jackal-like form. They have long muzzles and double rows of teeth, which insure at least 4 points of damage with a successful bite attack. They run on all limbs, but can use their taloned forelimbs for grasping. Their sole source of moisture is the blood of their victims, so they devour both the living and the dead, including fallen ghorii. They are usually the color of the local soil, and hide very well, except for the stench which reveals their presence. They prefer to travel in large bands or hordes, which are always led by by a hierarchy of chieftains and shamans of 3-6 HD, or on rare occasions by an osyluth (bone devil). Except for a bag of odd spell components worn about the neck of ghorii shamans, they are always naked and carry no treasure. However, the opulent treasure of previous victims can often be found strewn about in the vicinity. The desert wraith (see p. 14) can be mistaken for a ghorii, often with fatal results. Good rules of thumb: If it looks like a jackal and doesn’t avoid you, it isn’t a jackal. If it travels alone, or has a furry pelt, it’s probably a desert wraith. COMBAT Ghorii favor ambushes and overwhelming odds. They will leap from above like panthers, given the opportunity. Stench Attack (Ex): This is a passive ability. When 7 or more ghorii are indoors, or 20 or more ghorii are outdoors, all other creatures with a sense of smell found within 20 feet must succeed at a Fortitude save (DC 13) or be wracked with fear & nausea, suffering a -2 penalty to all attacks, saves, and skill checks for the next 10 minutes. Darkness (Su): Same as the 2nd-level cleric spell. 1/day for shaman. Create More Ghorii (Su): A ghorii shaman invokes hellish powers to create more ghorii from jackal skeletons wrapped in human skin. This cannot be done in battle, and requires several hours of spell casting. Ghorii must be created in multiples of five, and each one requires a complete jackal skeleton and the entire skin plus some blood, brain & bones from a human. 1/week for shaman. Receive Double Damage (Ex): Ghorii take double damage when receiving any successful physical blow. Undead: Immune to mind-influencing effects, poison, sleep, paralysis, stunning, and disease. Not subject to critical hits, subdual damage, ability damage, energy drain, or death from massive damage."
There a few conclusions that we can glean here. The Ghorli were once human or humanoid tribesmen. They have shamans & still retain a tribal society even in undeath. But what exactly are they?! My guess is  an evolved form of ghoul that has been created by some ancient Lovecraftian god. The rite to create more ghorii tells the story; "A ghorii shaman invokes hellish powers to create more ghorii from jackal skeletons wrapped in human skin. " My best guess would actually be Mordiggan from the Clark Ashton Smith tale 'The Charnel God' “‘Mordiggian is the god of Zul-Bha-Sair,’ said the innkeeper with unctuous solemnity. ‘He has been the god from years that are lost to man’s memory in shadow deeper than the subterranes of his black temple. There is no other god in Zul-Bha-Sair. And all who die within the walls of the city are sacred to Mordiggian. Even the kings and the optimates, at death, are delivered into the hands of his muffled priests. It is the law and the custom.’” — The Charnel God, CAS 1934


The Ghorli may have been once been desert tribesmen who committed suicide enmass to their Lovecraftian god. The corruption of 'the Ghorli curse' simply keeps spreading among the victims of the undead horrors. The Ghorli tribe or species of undead simply keeps spreading in Zothique's wastelands & deserts. The fact is that these undead horrors are ideally suited to Zothique's desert wastes. And if there is one artist whose work for me captures Zothique its got to be Rodney Mathews.  The Ghorhi haunt and guard the ruins of cities, wizard towers, and the former royal holdings of long extinct nations in the wilds of Zothique. 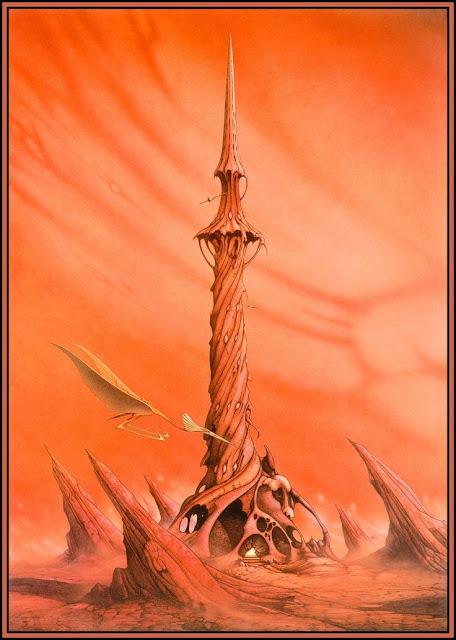 Rodney Mathew's artwork used without permission..
Will the Ghorli tribe or species take over Zothique?! Not anymore then another semi demonic undead horror will. The species while aggressive & very dangerous are perfectly suited into their undeath ecological niche. These monsters are far too specialized in their behavior & undeath state. They may have to be pruned for the greater good of Zothique. But at the moment at least these undead horrors  are a very large specialized & niche enviroment. But evertything about these situations feels like its being set up & the Ghorhi in position to take out the enemies of the gods of evil on Zothique.
Posted by Needles at 7:51 AM