"The planet Sarmahalos III is a non-aligned agricultural world in the Sonora sector. There are no major industries there other than farming. For thousands of years the people of that world have wondered at the strange alien spire atop a mountain that overlooks their primary population center. This spire has a long spiral staircase on the outside of it leading upward. There is no known way to enter the spire other than by ascending to the top and lowering oneself down into it. No person who has ever done this has ever returned." 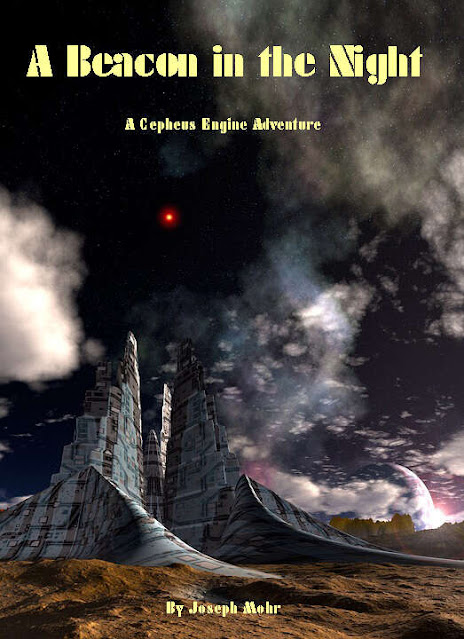 'A Beacon in The Night' by Joseph Mohr is a 'pay what you want' adventure & is a mid tier campaign adventure for the Cepheus Engine rpg. And its both alien exploratory & archeological adventure romp  rolled into one.
'A Beacon in The Night' is a quick thirteen page affair. It could be maybe played out over  four to five sessions at the most of Cepheus Engine action. This adventure can take place on your favorite colony world with very little fuss. 'Beacon in the Night' is plug in and go for an evening's play. The writing is tight, the cartography is well done, & 'Beacon in the Night' is solidly done for a 'pick up & go' group of players.

'A Beacon In The Night' works in a wide variety of Cepheus Engine rpg campaigns. For example, A Beacon in The Night could easily be dropped whole cloth into the Clement Sector or Earth Sector campaigns with little issue. And could act as a 'first contact' situation for the players PC's.
In the 'Hostile' rpg  the situation of 'A Beacon in The Night' has both dire & daring interstellar implications for the human race. This adventure could completely alter humanity's place in the universe.
For 'These Stars Are Ours' campaign setting 'A Beacon In the Night' has a completely different set of implications & actually could offer humanity the opportunity to gain both new allies & possible trading partners.
All in all 'A Beacon In The Night' is a solidly done mini campaign adventure that works on three levels of play.

'A Beacon in The Night' by Joseph Mohr a 'pay what you want' adventure For The  Cepheus Engine Rpg Is Available Here
Posted by Needles at 8:33 AM