21 Vehicles is the first book in a new series set within our Clement Sector setting.  Within this publication are details and illustrations of twenty-one civilian and military vehicles that can be typically found within Clement Sector." 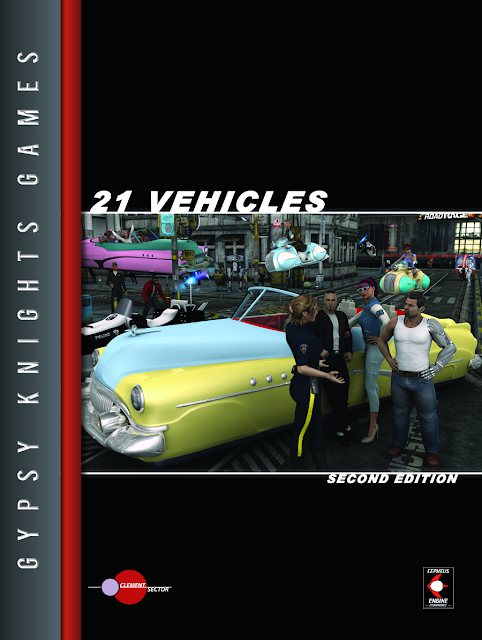 21 Vehicles 2nd Edition By Michael Johnson is one of those stealth rpg books that doesn't look like a great supplement but is actually a key book for the Earth sector rpg or Clement Sector rpg. The fact is that vechicles are well laid out & statted up for the DM to print them out for their Cepheus Engine rpg games. 21 Vehicles 2nd Edition is solidly done for your own Science Fiction rpg games. The feel  of this book is late 50's Texas or Western United States with a classic design asthetic. Someplace between 40's films & Bladrunner.
The writing is tight, the design work classy, the whole 45 page book feels, is & actually has lots of ulitity at the table top level. 21 Vehicles 2nd Edition fits it's role of additional rpg prop equipment, adventure focus, and this book covers everything from civilian to military vehicles.

For six dollars the DM gets a smattering of vehicles from hover trucks to full blown flying tanks all in 21 Vehicles 2nd Edition! And they definitely fit both Earth Sector & Clement sector while bringing the heat of a Space Western to the proceedings. Each of these vehicles takes the place of horse, stage coach, etc. for the Cepheus Engine rpg system. The military vehicles could also be used for Clement Sector equivalant to the 1832  United States Cavalry.
21 Vehicles 2nd Edition By Michael Johnson From Independence Games could also be used for Cepheus Atom easily as a stand in artifact or treasure book for a gang of 2d6 mutant adventurers. This book could also be used for militaries of invading colony forces and more.