"Far Horizon is a Near Future science fiction adventure and spaceship book for Cepheus Engine and for the Classic 2D6 SF roleplaying game that is based on. " 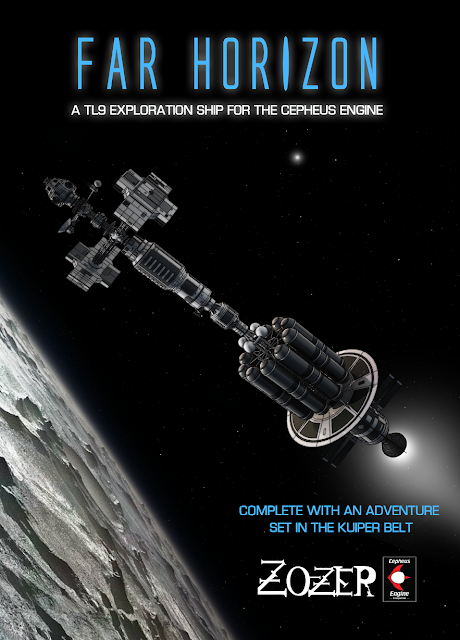 "It is 2100 AD and the Earth’s Space Development Agency has funded a mission to the outer edge of the Solar System. Pluto and Charon have been explored and human landings have been made for the first time. Now the crew has taken on a new mission to explore Tartarus, a minor planet billions of kilometres from the Sun and one that is a rogue and not native to our Solar System. Tartarus is a passing interstellar traveller and Earth wants the crew of the Far Horizons to be the first humans ever to land on such a mysterious ‘rogue world’. Its irregular trajectory has the scientists on Earth puzzled – and there’s nothing like getting humans on to the surface to solve a puzzle!"

Far Horizons is a favorite adventure from Zozer Games because it has the potential to be a multiple part campaign adventure. The idea that a planetary body has a very expensive spacecraft around it wrapped in an enigma surrounded by a mystery. Draws in players like moths to a flame. What happens when a mission fails, the planetary body is still in orbit and still no one knows what happened! Suddenly, in the Hostile universe 125 years later nuclear jets fire after a frozen computer's circuits tumble together. The PC's corportation detects the signal & the race is on!
Taratus is still a major interstellar find and the puzzles of the Kuiper belt are still being explored even as the belt is being mined. And if Orbital 2100 is the 125 year  past of Hostile then there's still a lot of national tension going on the boardrooms of Earth & beyond.

There doesn't have to be a monster per say to have the horrific happen simply look at the history of the Shackleton expediation for inspiration. The long term effects of the secrets of the Far Horizon mission is incredible for the Hostile universe. Men will kill for it, murder will be commited, science will explode, and the space industry will be rocked from stem to stern. The legacy of Tartarus from the
'Far Horizon' mission could actually be run as well in Independence Games Earth Sector universe  with the same implications. The puzzles, traps, tricks, etc's rewards of the Far Horizon are very far reaching indeed. And this could spell the change needed to breach the worm hole closing in the Clement sector if played right.
Far Horizon is an upper level medium adventure in which the 'meat headed' approach of Space Opera rpging is going to get the PC's killed or worse. Seriously, Far Horizon's is a very finely balanced but extremely well done 2d6 Science Fiction adventure for Zozer Games's rpg products & other 2d6 Science Fiction rpg's.

Far Horizons by Paul Elliot From Zozer Games Is Available Here.
Posted by Needles at 11:44 AM