The Night Stalker, Manambulus perhorridus, is a large, ferocious, pack-hunting, flightless leaf-nosed bat from Batavia, from After Man: A Zoology of the Future by Dougal Dixon. Once other vertebrates had established themselves on the islands, a new family of ground-dwelling predatory bats arose. These creatures walk on their front legs (on what would, in the case of a flying bat, be its wings, the site of most of its locomotors muscles). Their hind legs and feet are still used for grasping, but now fall forward to hang down below their chin. As the bats locate their prey purely by echolocation, their ears and nose flaps have developed at the expense of their eyes, which are now atrophied. 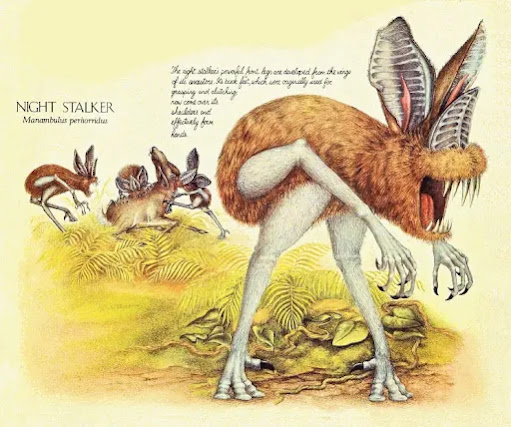 Artwork from After Man By Dougal Dixon Used Without Permission

The largest and most fearsome of these creatures is the night stalker. One and a half meters tall, it roams screeching and screaming through the Batavian forests at night in packs. They prey indiscriminately on other mammals and reptiles, attacking them with their ferocious teeth and claws. Wasteland wizards  throughout the multiverse have imported the Night Stalker as watch beasts & antipersonel monsters..
The Nightstalker 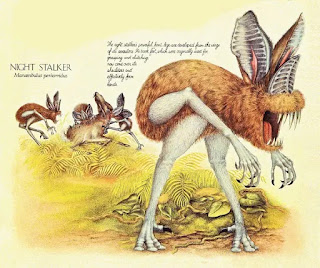