The Shemarrians, the phantom right arm of Archie Three and a force to be reckoned with in the wild woods beyond the Eastern Wall (the Allegheny Mountains). An in-depth look at the fabricated femme fatales, their false society, and the schemes and dreams that Archie and Hagan have in store for them. 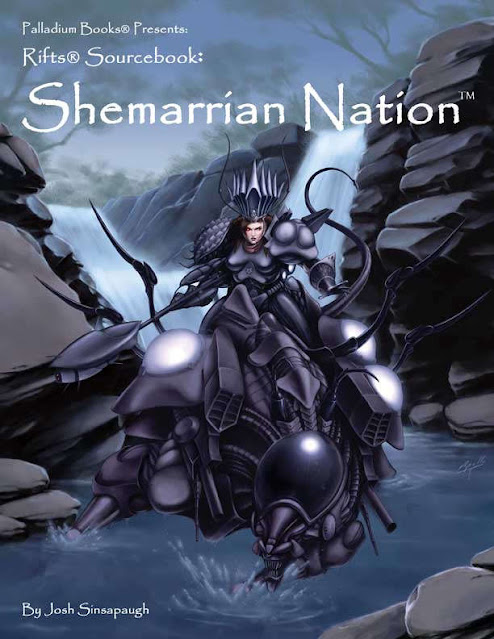 - The Shemarrians and their place in the Eastern Wilderness. How the regional factions and power blocs view the warrior women and how the Shemarrians (and Archie) view them.- Shemarrian history, society, and culture.- Shemarrian Secrets: They are really androids fabricated by Archie-Three.- New types, war mounts and weapons of Shemarrians.- Over a dozen android and robot minions of Archie Three, including the Avian Spy, Shemarrian Pariah, and the so-called RMar Alien.- Shemarrian as and Optional Player Character.- 96 pages - Cat. No. 878."
So what's so good about the Shemarrion Nation book by Jos Sinsapaugh & Kevin Siembieda?! Well, first of all this is an update to the Rifts sourcebook one and it extends the reach of A.R.C.H.I.E. - Three & his pet human. The Shemarrian robots & androids have been gathering intelligence on all of the factions that are affecting America and specifically the Eastern Seaboard. As Joe M. Magnus says in his Amazon review from 2020;
"The game book Shermarrion nation is basically an add on for Rifts source book one, and adds to ARCHE THREE on the east cost of America. Over all this is a good source book, with lots of "new" information, unlike other Palladium product that are mostly rehashed and reused material. There is also a lot of information about the areas on the east coast up into Canada." The Shemarrians are tough S.O.B.'s and even in Rifts Earth their nothing to mess with. And we get a grand tour of the factions of Rifts Earth's various factions seen through A.R.C.H.I.E. - Three's eyes. And the Shemarrians themselves are basically high end Terminator style androids & robots manufactured by A.R.C.H.I.E. - Three and Hagan. And they are both spy agency & boots on the ground for A.R.C.I.E. Three quite literally. PAL0878 Shemarrian Nation Adventure Sourcebook Rifts RPG has the usual power creep that one finds in Rifts books from '09.
The problem is the fact that the artwork isn't very good in this one hundred page source book. And I'd really would like to have seen even more Shemarrian PC classes here. And what Shemarrian Nation does is pose the Shemarrians as a faction unto themselves. The Shemarrians are  minor power player in the wilderness of Rifts America. A vast & very much wild wilderness in the whole scheme of America. Making the Rifts hex crawl or point crawl a reality and that's no joke. The Shemarrians are capable of going toe to toe with Atlantis's minions or a small patrol of the Coalition's forces. But in a stand up fight with say a full paltoon of the Coalition they're going to be slaughtered down to a fighter.  The Shemarrians work best as an alien group of DB's visiting the East coast with mysteroious origins. This sourcebook bares this out and then some. The Shemarrians are another alien force in North America & their mysteries shouldn't be explained to the players. Their far more interesing as mysterious DB's on an alien exploritory mission in North America. Their makers & patrons shouldn't ever come into a campaign. That being said.
The fact is that Shemarrian Nation sourcebook could have used more in the way of a renagade Shemarrian PC class & less in the background department. These are going to be rare renagade Shemarrians who have slipped away from the control of Archie & Hagan's grasp. They are not going to simply flaunt their origin & background as in the wilds of Rifts Earth this means swift & fast death.
There is page after page of history, background, etc. But the fact is the Shemarrian Nation is still a good supplement for the Rifts Rpg. There are lots of solid ideas, hooks, lines, and sinkers in the Shemarrian Nation book & what it does is expand the reach of Archie and Hagan up & down the Eastern Seaboard of America as well as giving future plans & ideas for Rifts campaigns coming up!