" Have you been wanting to include some classic old school dragons in your campaign?  This book will save you hours of development time!  Many thousands of dice rolls have been made for you, with the results carefully collected into stat and treasure templates for easy reference and use.  Herein you will find 100 pre-generated dragons complete with unique names, combat statistics, spells (as appropriate), and pre-rolled treasure hoards. " 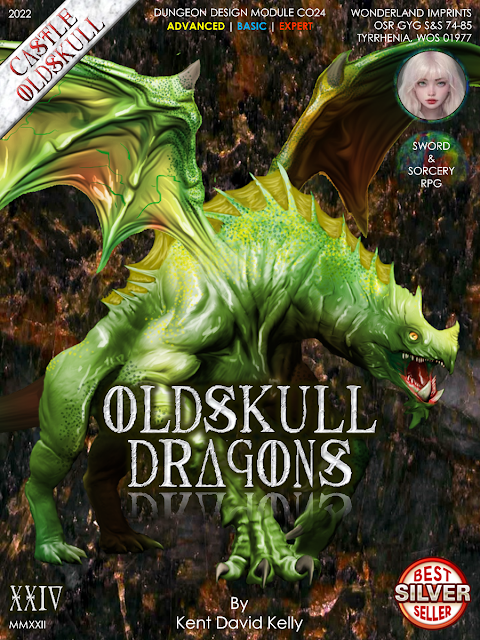 "All 100 of these glorious beasties have been sorted according to their relative challenge level, from Crysthax the Pale (a very young white dragon, suitable for level 1 or 2 encounters) all the way up to Arcanthia the Invincible (an ancient gold dragon, who can easily provide a challenge to PCs of level 15 and up).All stats are clearly provided in Basic/Expert/Advanced format for easy conversion to other systems."

There are two things you as a DM can never have enough of and that's  dungeons as well as  dragons. And let's talk about dragons shall we? Specifically CASTLE OLDSKULL - Oldskull Dragons From Kent David Kelly! CASTLE OLDSKULL - Oldskull Dragons rocks in at one hundred & fifteen pages of old school goodness. There's this huge D&D sale on drivethrurpg & a player of mine grabbed the Castle Oldskull mega bundle for me. CASTLE OLDSKULL - Oldskull Dragons is on the pile of pdf books that I'm making an effort to review. So CASTLE OLDSKULL - Oldskull Dragons is a tome of well dragons that covers NPC dragons across multiple editions including Basic/Expert/Advanced. What it does is flesh out these dragons not simply as 'monsters of the week'. But as living & breathing NPC's with thier own characteristics, special abilities, treasures, etc.. Instead of simply as a pile of stats on the page. The stat blocks are crisp, the writing solid, & the ideas are well done. There's more then enough to keep dipping back into the well again & again for a different dragon with different challenges to suit your environs & the campaign.
These dragons could come in very handy in OSR games as you need them as important NPC's.
Oldskull Dragons fits the bill in several ways. One it allows one to bring dragons into a campaign that most players have never heard of. Two dragons are a perfect for mid to high level OSR campaigns where kings, & royals face down NPC's. Yes, I'm talking about a game such as the Adventurer, Conqueror, King rpg here. Oldskull Dragons  is also excellent for Castles & Crusades but there may be some modifcation necessary to fit your C&C campaign. The truth is that CASTLE OLDSKULL - Oldskull Dragons fits a niche and that is the fact that almost any Dungeons & Dragons campaign can use a dragon. The monsters are incredibly powerful, very well done, and absolutely underrated in my estimation of the grand game. There are a variety of reasons for this and they include the fact that dragons are too damn powerful, dragona have undeserved reputations, dragons can undermine a campaign, and dragons fit their alignment. Dragons are also very cunning & should be used sparringly.CASTLE OLDSKULL - Oldskull Dragons From Kent David Kelly  goes a long way to fixing a multiplicity 0f problems with old dragons. The writing is top drawer, the exacution well done, & over all this is a good book to add too the Dm's tool box.