Thoughts & Impressions On First Read Through of The 4th Edition Morrow Project rpg From Timeline Ltd.

"When it appeared nuclear war was inevitable, a clandestine project was considered and launched. Hundreds of citizens and experts with specific skills would be cryogenically frozen in hidden boltholes around the world. A few years after the End of the World, these people would then be released to help rebuild the world. Complications arose, and the first of these enclaves were instead released nearly 150 years in the future. And contact has been lost with the other enclaves. Can this small crew exist and survive in a world they no longer recognize? Can the world still be saved?" 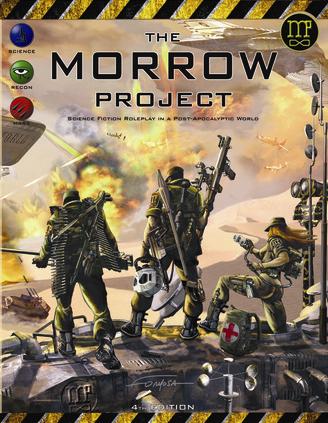 So almost a week back I contacted the Timeline Ltd. folks about the Morrow Project rpg. And just incase you don't know the history of the Morrow Project rpg here's the short synoisis from the Morrow Project Wiki entry; "The Morrow Project is a science fiction role-playing game created by Kevin Dockery, Robert Sadler and Richard Tucholka and published by TimeLine Limited. It is set after a devastating nuclear war. It was first released in the 1980s, and it still has a loyal following. The fourth edition was released as of December 15, 2013 by Chris Garland, the head of Timeline Limited."
What came in the drivethrurpg link from the Morrow Project facebook group was a mamoth 330 page monster! This wasn't the game that came across the table top in 1980! Instead this is a whole cloth behemoth classic. Let me explain, the Fourth edition of the Morrow Project is possibly one of the most customizable post apocalpytic rpg that has crossed my desk. Yes, the classic Morrow Project background is there & yes the bulk of the setting is there plus more; "One hundred and fifty years after the fall of civilization, the members of the Morrow Project wake to a changed world. Without the modern transit and communications infrastructures, distances that once took hours, now take weeks, and news that once traveled in milliseconds now takes months to arrive, if ever. This new world is characterized by tiny hamlets of simple daily existence awash in a sea of barbarism and anarchy. The Morrow Project could not prevent the coming catastrophe, nor did they have the resources to help everyone immediately. It was possible to help with the rebuilding, but even this was a massive undertaking. Plan became action and over the years many well-trained teams were cryogenically frozen in hidden bunkers to emerge at the time when their resources and help could do the most good. Intended to be part of an organized plan to rebuild America, your team finds that they have missed the 3-5 year expected wake-up call. Now, far outside the original time frame and unable to contact the rest of the project, they must start alone the process that was intended for thousands. Isolated in a world where the war is only a distant legend, your team must rely on their ingenuity, training and each other to carry out the general orders of the project: 1. Assist the population in rebuilding America whenever possible. 2. Reunite with the bulk of the Morrow Project forces. 3. Survive! The Morrow Project may be played with nothing other than this book, dice, paper and pencil. Included in this book are full details on Morrow Project teams, vehicles, equipment, modern weapons, complete medical details, people and creatures living in the post-holocaust world, and more." This blurb comes from the back of the Morrow Project book. 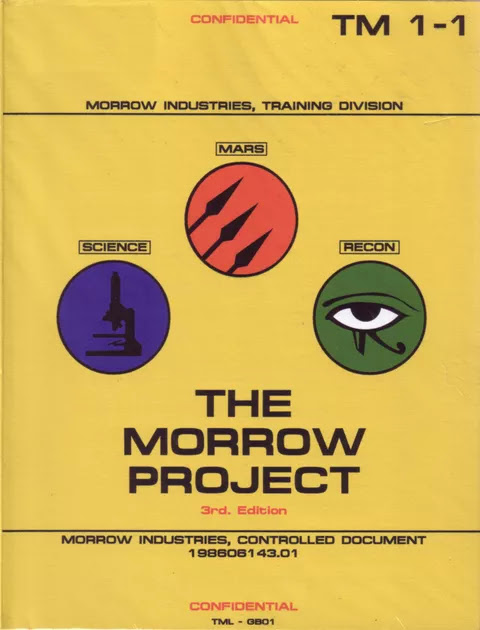 So all this is within fourth edition Morrow Project. But there's so much more then what was thought to be in the book as I remember it. Morrow Project is a savage post apocalytic rpg with the DM deciding how, where, & why the apocalpytic events will touch the US 150 years down the road when your party wakes up from hypersleep. The Morrow project itself & its background is still intact but man, the rpg has become a very detailed post apocalpytic rpg tool kit. Chris Morrell states the aims of the fourth edition of the Morrow Project right in the introduction; "My aim, even from that fi rst meeting to discuss the re-write, was to establish a system that tightly meshed both rule sets together, and produced something new. Gone were the D20 tables, and most of the other dice types. Instead everything was based upon 1D100 and 4D6. We had new Ability scores, permitting a more rounded character. The core mechanism of rolling under a score that is a product of an Ability Score x 2 plus any skill, borrows inspiration from the old 2nd edition D&D NWP. The degrees of success mechanism had already been used in another game I was writing, and had its infl uences from a conversation I had had with Steve Perrin the original author of Runequest. The doubles as critical or fumble rule was, I thought, new. I was later to fi nd that it had been thought of before."

The Morrow Project rpg that I remembered is here but there's far more too it now & that's a good thing. Paramilitary & post apocalytic rpging is a niche within a niche of the rpg hobby & the Morrow Project fits this niche incredibly well. But with that come certain challenges & that includes finding the right group of players willing to take the gamble on such a game. The combat is incredibly lethal for this system & the reality of the rpg is very detailed. Even more so then say classic Twilight 2000 or the gonzo nature of Gamma World. Survival within the Morrow Project's campaign setting is going to take team work. Solid gaming & a very well thought plan on the part of a party of PC's.  All of the classics to take out your PC are here danger,  disease, radiation, fallout, & other humans ( some of the most dangerous things to encounter are other people), etc. And yet the reward of survival, thriving in the wasteland that was America, and helping to rebuild civilization is all a part of the Morrow Project.
Many folks in the OSR talk about adult gaming & realism the Morrow Project provides that in spades. The world is super detailed as you make it. Are the little booklets that you remember from 1980 still here? Umm no instead we get a complete survival at all costs & a balls to the wall classic in the Morrow Project fourth edition. Five out of five for me as both DM & Morrow Project gamer.