"Millennia ago, Adityans ruled Antillia. They were an advanced space-faring civilization that used this world for their genetic experiments. Through those genetic engineering projects, the Human race was born. But they also designed other creatures, mixing human and animal DNA. That’s how the Furry Bastards came to be" 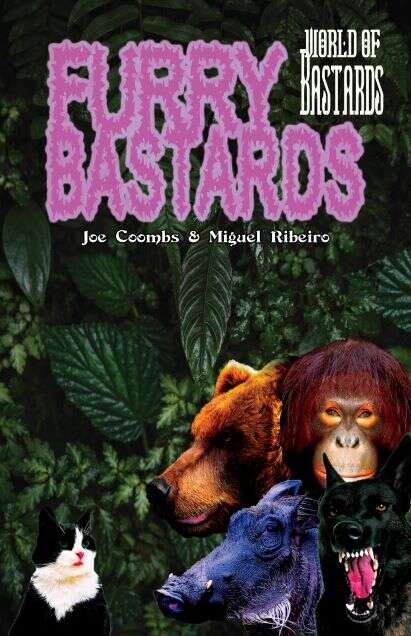 "World of Bastards: Furry Bastards"  By Joe Coombs, & Miguel Ribeiro is a twenty four page supplement for The Wretched Bastards rpg. "World of Bastards: Furry Bastards"  is an uplifted animal shape shifter book that allows a PC to assume the role of a human shape shifter in the world of the Wretched Bastards rpg. Basically there are seven species of Dhogor or shapeshifters.
The seven species of Dhogor are as follows: • Cat Folk • Bearpeople • Canidaens • Swines • Goat Folk • Amphibians • Apeman
And  "World of Bastards: Furry Bastards"  lays everything out in neat OSR terms. Take for example the Bear People;"BEARPEOPLE RACIAL TRAITS Special Abilities: - Natural armour: they have Defence 16 - Unnaturally strong: add +3 to Strength at no cost - Unnaturally agile: add +2 to Dexterity at no cost Innate skills: - Bear Hug, 1d10 damage Racial Penalties: - Penalty to all social rolls (-2) when dealing with humans, dwarves and elves - Can’t use magic - Bearmen are bad at stealth, they suffer -3 to all sneaking and hiding - Dull-witted: can’t have Intelligence ability above 5 LÉON Léon was only a cub when a circus troupe purchased him and moved the young Bearman from the warm weather of the tropics to the cold tundra. LÈON Age: 29 Class: Fighter Level: 4th Hit Points: 25 Morale: 12 Defence: 17 (+1 Dex bonus) (Abilities: Strength 18 (+3) Dexterity 15 (+1) Constitution 16 (+2) Intelligence 5 (-2) Wisdom 4 (-2) Charisma 10 (0) Comeliness 13 (+1) Basic Skills: Climb, Hide, Native Language, Search, Sneak Skills: Brawling Level 5, Melee Level 5 In the circus, Léon performed feats of strength and was treated as a slave. Luckily for him, the acrobat Alyna fell in love with him and helped him escape captivity. Now they are itinerant performers in Kharabas."
Everything  "World of Bastards: Furry Bastards"   is easy to understand for those familar with the OSR &  carefully laid out with examples. There just enough customization here to create the PC or NPC that you want. And the lay out is easy on the eyes in  "World of Bastards: Furry Bastards". There's just enough here over the line to allow the DM to extend their own take on the PC material. At 1,50 this isn't an expensive addition to the Wretched Bastards rpg. The material here isn't over the furry line nor does it delve into weirdoville. Instread this is a twenty four page supplemental addition to the Wretched Bastard's rpg line that allows the DM to add in another option for players who want something unique & different to their OSR games.
"World of Bastards: Furry Bastards"  By Joe Coombs, & Miguel Ribeiro From The Red Room  Is Available Right Here
Posted by Needles at 10:47 PM