First edition After The Bomb by Erick Wujcik holds a very special place in my heart. Supplement for the  Teenage Mutant Ninja Turtles & Other Strangeness rpg was one of the rpg books that I had with me in hostipal after a rather nasty car accident in September 1986. After The Bomb was one of the books that kept finding its way into my hands again & again. And there's few reasons for this. One is the fact that according to its wiki; ' After the Bomb introduces a post-apocalyptic setting centered on the Eastern United States, where most of the area is populated by the mutated animals that form the majority of society.' 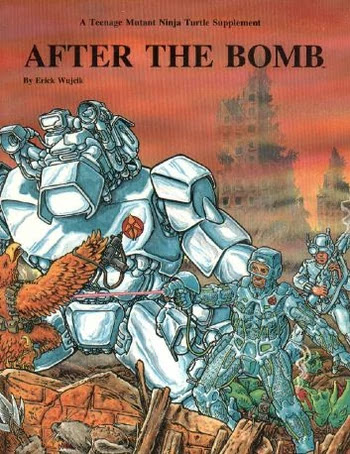 After the Bomb introdices an Eastern Seaboard that hasn't entirely been bombed back to the Stone Age. And New York City is right where its always been sans the mutant animals, mutates, and the Empire of Humanity. The Empire of Humity is an nasty bunch of racially pure pro humanity   in a world of human vs mutant animals.
The dynamic gentic viral changes quickly over the campaign setting's history leading to the apocalypse;  ' The same technology led to both the elimination of viral disease as a major problem, and the introduction of diseases as pranks. Kids would come to school with a vial of "homebrew" and infect the class as a joke. Because such diseases were easily cured, these pranks were regarded as "harmless".

Eventually, someone came up with a way to concoct an incurable disease. A virus was created which possessed an entire copy of a human genome; any cure that targeted the disease would also target the host.

This disease wiped out seventy-five percent of the world's human population. It infected most animals as well, and the animals that survived had human genes spliced in by the virus. These semi-human offspring displayed human characteristics in varying degrees. This would have merely resulted in a population mostly dominated by mutants if the leaders of the world's governments had not made the assumption that the disease was a bio-weapon sent by their enemies. The response from all sides was all-out nuclear warfare that devastated the entire planet.

The game can be assumed to take place a generation or two after this apocalyptic event, which is referred to as "The Crash" or " 'The Death"

So what does any of this have to do with the OSR!? Well looking over the Mutant Future wiki I came across this entry. Not, only does it show you how to run an After the Bomb rpg first edition  campaign using Mutant Future . But it goes into the 'ins' & 'outs' of PC generation & full on mutant adventuring in an Eastern Seaboard  post apocalpytic landscape.
The adventures in After the Bomb first edition range from low level all of the way up to full on campaign changers. And its not just me who thought that After the Bomb first edition was a solid game accord to the game's wiki; "Marcus L. Rowland reviewed After the Bomb for White Dwarf #79, and stated that "It's all good fun, if you can accept the basic premises involved, but seems a little limited; I find the present-day setting of the original game more satisfactory, since it offers more opportunities for plot development and diversity." I can't really speak to the second edition of After the Bomb because its not a book that we personally own or have played. Everything that I've read on line seems to indicate that it continues the original's post apocalpytic goodness!
So is the first edition TMNT rpg 'After The Bomb' still viable?! Absolutely it is! There's a ton of 90's rpg   nostalgia tied up with it. After the Bomb has stood the test of time