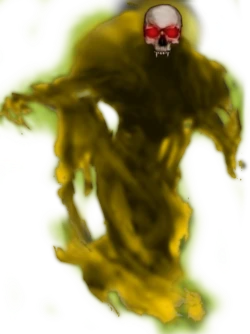 0kg Outsider, extraplanar flyer, GBJAA0 #App: 1 Treasure: None Athleltics-1, Sorcery-2, Melee Combat-1, Recon-1, Survival-1
Special attack; armor 0; flies 20m/action
Neutral; Morale DM+4 The Nihilist is a dread elemental spirit of the planar Winds, famous for its might and guile. • Immune to non-magical weapons. • Immune to poison and disease. • Knows 3D spells. The Nihilist demon radiates a horrid aura with the radius of 40m. This aura deals 1D damage per round to all surrounding creatures.The demon emits a sickening aura; any creature coming closer than 10m to the demon must throw END 8+ or be sickened: DM-2 to all actions, and only have one Action per round.Any being that sees the demon must throw INT 8+ or be paralyzed with dread. This effect ends when the demon leaves the victim's line of sight, or one round after the demon engages in combat. The demon may possess a target. The target must throw INT 8+ or be possessed and controlled by the demon. The target may attempt another INT 8+ throw once a week to cast off the possession; Dispel Evil exorcises the demon immediately and forces it to leave the victim's body. Note that there are no limits to how many people the entity can possess unlike normal demons.  Whirlwind: may create a whirlwind around itself at will, causing 1D damage to anyone within 2m range

The Nihilist is the skull  remains of a planar spirit or god that was found on NS-482 by scientists & researchers for Project Far Jump. All those connected with Project Far Jump including staff, scientists, expediation personel and others are dead by suicide. The Nihilist essence is contained within the alien skull & has  moved on from the Project Far Jump facilities to parts unknown. It's motives are simple:

The character of The Nihilist is available for use by anyone, with only one condition. This paragraph must be included in any publication involving The Nihilist, in order that others may use this property as they wish. All rights reversed.

The Nihlist is from the Public Domain Super Heroes site here and should be used with caution as it can quite easily cause TPK's.