They're coming down off the walls! - Greyhawk Castles & Crusades Mixed session report II

So tonight's DM Steve game saw me step from behind the screen once again & get a chance to play Castles & Crusades. This game session report is going to pick right up from last blog post here.  We took up positions amid ruined columns & debris at the bottom of this dungeon. And as we were taking stock of our situation one of the idio erm adventurers wanted to light a torch in the middle of this dungeon. Already we'd seen evidence of orc inhabitation & caught sight of goblin activity in the area near us. Namely discarded & broken arrows with lots of human blood on them. Never a good sign. We did light the torches & my God I'm sorry we did! The walls of this former ruin were literally crawling with goblins! They were lightly armored, armed with short bows, and daggers! And there were hundreds of them!
And that's when we decided to run! That's right we ran like our lives depened upon it with torches in the dark until we reached a door. It was unlocked! We took the opportunity to bolt in then take stock of the situation after we bolted the door. We were quiet,very quiet in point of fact. Checked the store room we found ourselves in for traps, rats, extra. But it was an ordinary store room with a couple of skeletons with in it. We quickly separated heads from bodies & quietly separated the bones. Then looked around for giant rats! Fortunately there wasn't a single one! Whar we found were extra arrows, sling stones, etc. left behind by the former adventurers whose skeletons we found.
As everyone else was taking stock of the room, my PC listened at the door. Experience in DM Steve's campagin had taught us well. There had to be a fresh water source nearby to support the goblin population & their orc or hob masters. And that's when I heard something big just outside the door. We extinuished the totches. And our cleric silently prayed to her gods. 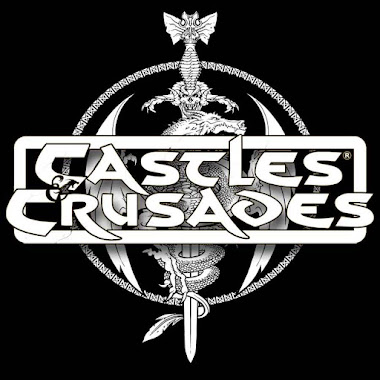 Jusr outside the door I heard the heavy foot falls of the monster and what seemed like thousands of tinier foot falls joining it. We stayed put for almost an hour as the sounds passed the door again & again. The door was baracaded by this time as we quietly handed ruined furnature & debris to block the door temporarily.
When the coast was clear we left & moved into one of the side hall ways off the main ruin's hall. And we figured out our problem we landed smack into a goblin nest site! This ruin was two former buildings that had crashed into each other & the halls were actually in the other building. That's when we heard the shrill voices of some creatures with the shadows of torchlight coming our way down the hall. Again we ducked into another room until the orc patrol passed!
I got a chance to get a good look at these orcs & their armor, weapons, etc. were all in good repair. They wore armor similar but not quite the same as the goblins! We've got a series of well orgnized goblins, orcs, hobbs, and hobgoblins all armed to the teeth. This whole affair was making  me as a player very nervous.
So I pulled the other players aside on smoke break and told them my theory that we needed to get out of here fast. There were way too much activity that screamed goblin hive and orc overseers! And we weren't finding anything to contradicted this!
We rouned the next hallway corner and came face to face with a hobb along his 4 goblin henchmen. We didn't want to face down a raging hobgoblin strong man with hormone issues. I mainaged a lucky roll doing damage to his back with my daggers! And that's when it became pile up on the hobb & his henchmen.
After combat we looted the bodies & talked about how rich they were which was worrisome! Why?! Because there had been other adventurers down here.