"...and so, after the Rain of Colorless Fire, the One-Named-In-Whispers ascended to the Spidered Throne. In the third year of his ascendancy, Burgred, King of the Mara, refused the tribute of heads the Whispered One demanded. The One-Named-In-Whispers took only himself and Kas, his evil counselor, and devastated the land of the Mara with his magic. Burgred paid with his own head.

Upon their return, Kas struck against his master, so that he might become the master of the Spidered Throne. In the end, both were slain and good people rejoiced. 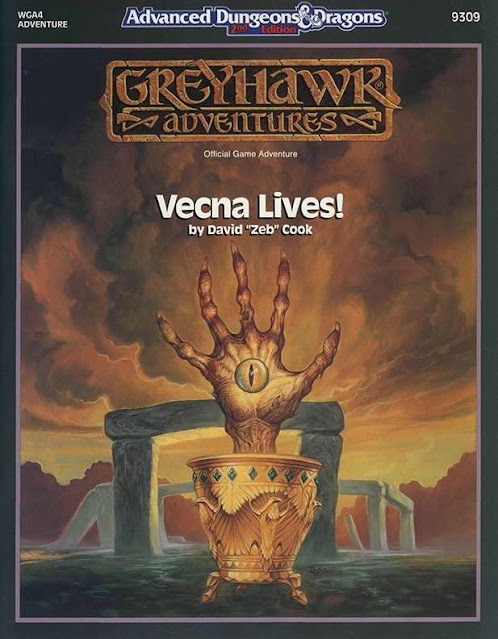 "It is said that not all of the evil Lich was destroyed. So great was his power that his Hand and Eye have lived on, working evil over the centuries....

"For centuries, Vecna - archmage, despotic tyrant, the most fearsome of all liches - has been nothing but a fearful legend to the honest folk of Greyhawk. Once the supreme master of all undead sorcerers, even today his Hand and Eye are objects of immense power.

Now something evil is stirring in the lands around Greyhawk. The Hand and Eye of Vecna have been found - and Vecna wants them back."

WGA4: Vecna Lives! (1990), by David "Zeb" Cook, is the fourth adventure in the World of Greyhawk Adventures series. It was published in January 1991. WGA4: Vecna Lives! as the fourth adventure in the World of Greyhawk Adventures works on a number of levels especially players attention on Stranger Things fourth season on Netflick. This renewal of the Greyhawk campaign setting brings home the attention Vecna commands. And this brings home the fact that  Castles & Crusades is perfect for plugging in as the running rpg system. And WGA4: Vecna Lives! works well with James Ward's Greyhawk Adventures. Because Vecna Lives takes place after 'From The Ashes' box set's events in Greyhawk. And here's where the  Castles & Crusades NPC Almanac The Register. Comes into it's own. 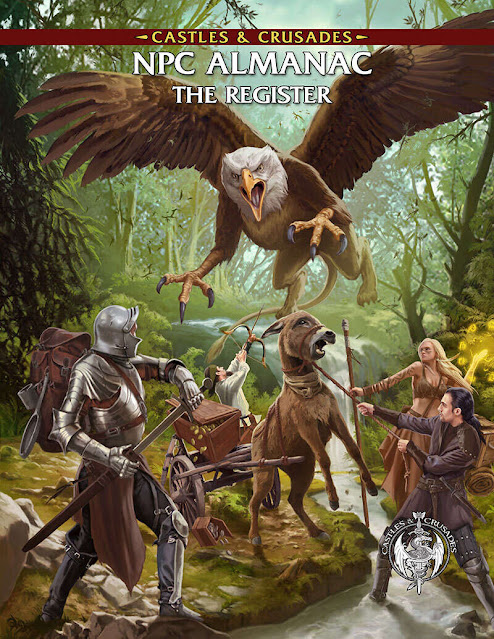 The  Castles & Crusades NPC Almanac The Register is perfect for creating travelers, refugees, etc. from the events of  From The Ashes by Carl Sargent  within Greyhawk. And its dark fantasy roots & underpinnings show through especially with WGA4: Vecna Lives!. 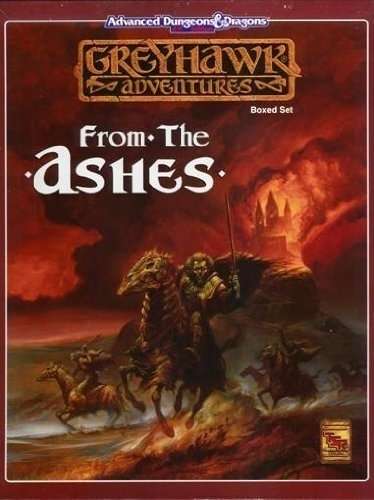 'From The Ashes' up from the Warden slamming into Greyhawk and this kicks off the events of the box set. And stablility goes from civilization into Chaos.