Far-Go is dying... the people are afraid... the animals are wasting away... the crops are withering the fields. No one, even Arx Skystone, the high priest, knows what has caused Far-Go's misfortune." 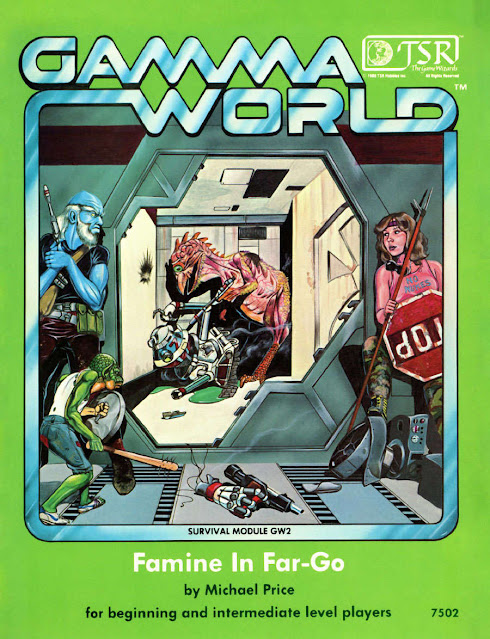 "YOU are part of a group of young adventurers about to begin the sacred Rite of Adulthood. The last hope of survival for Far-Go rests with your party. On your journey to the Forest of Knowledge, you must search for clues to the origin of the mysterious plague. This quest may led you into great danger... and great knowledge. As you travel through the savage wilderness, all you have are your companions, your wits, your strength... and your dreams!!"
"Famine In Far-Go" by Michael Price remains a favorite Gamma World module from Eighty Two. And it still hits all of the high marks including referee notes, background information, maps, new creatures, mutations, robotic units and new rules for Pure Strain Humans. But what marks this module as different is the nature of the coming of age of the youth of Far-Go adventure. This module hits all of the high lights of a big numbers post apocalpytic adventure, "This module is designed as an introductory adventure series for 2-1 0 players, but a group of 5-7 players is best."
Did I happen to mention that its in print on Drivethrurpg?!! What makes  "Famine In Far-Go" is the coming of age aspect of the module & its vivid imagery from Gamma World. Walker P on the Rpg Geek site says it best in the comments on Famine in Far-Go; "An absolute classic and my all-time favorite module. Sure, it seems a bit railroady, but you can just strip that wrapper right off and let the players go wild in a crazy part of the world. The whole chicken processing plant gone wild is exactly the kind of thing you want to do in a Gamma World game. And what an awesome cover!"
From the Tim Truman interior to the exterior artwork  "Famine In Far-Go"  works!  "Famine In Far-Go"  works as both a sand box or as a rail roady style adventure. The whole cloth adventure has far more potential as both module & as campaign jump off point for Gamma World. 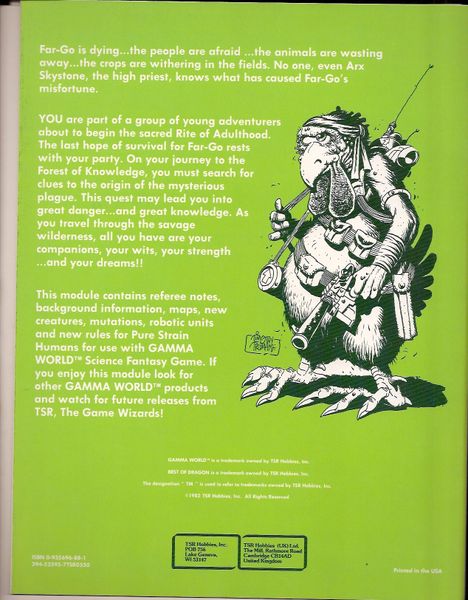 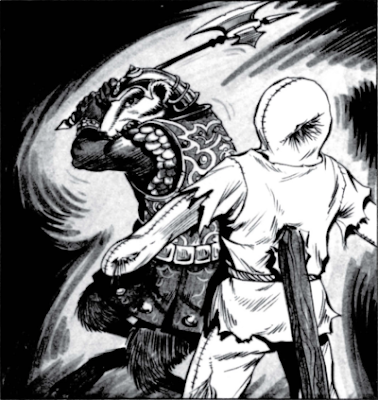 Anyone whose played "Famine In Far-Go"  knows the ins & outs of badders. And personally I've lost at least three or four PC's to the badders & Gallus Gallus 5/13! These cyclops chicken mutants were the worst! 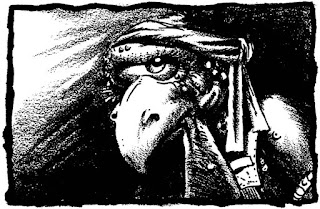 Gallus Gallus 5/13, gun-toting mutant chicken cyclopes, the hideous – yet in retrospect inevitable – result of running an experimental radiation laboratory inside a poultry breeding house  (Tim Truman and Jeff Easley, Gamma World module GW2: Famine in Far-Go, TSR, 1982). These things were horrid to face down in the post apocalytic wastes especially with a DM who knew you'd be dealing with a chicken factory full em! Make no mistake these are evil poultry & I can believe in gun toting mutant chickens! 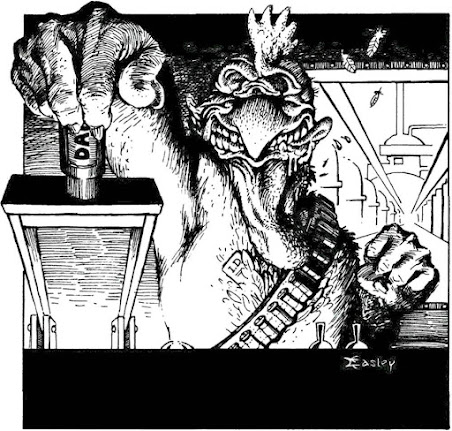 So does "Famine In Far-Go"  still stand up in 2021?! Yes no only is this classic a classic for a reason but the adventure plot points about, ""The Rite consists of traveling far from the community to find the Forest of Knowledge, where they must eat from berries growing around a certain tree." work. But this aspect of a party's quest is something lacking in many modern OSR modules today. "Famine In Far-Go"  is everything I expect in classic 1st edtion Gamma World adventures & Gamma World done right.
You Can Pick Up A Print Copy of Famine In Far Go Right Here
Posted by Needles at 10:50 PM