When it comes to interstellar rpg games there's one thing that's always been a pain in the afterburner. That's the fact that there's never enough equipment to satisfy every science fiction or science fantasy fan. And this was something that came across when looking over Troll Lord Games's Starship Warden rpg book. Not that there isn't enough sci fi equipment & weapons. But enough to satisfy the sci fi fanatics? What to do?! Fortunately all of the heavy lifting was taken care of by ANGRY GOLEM GAMES. And their book 'The  Stars Without Number Equipment Database'. 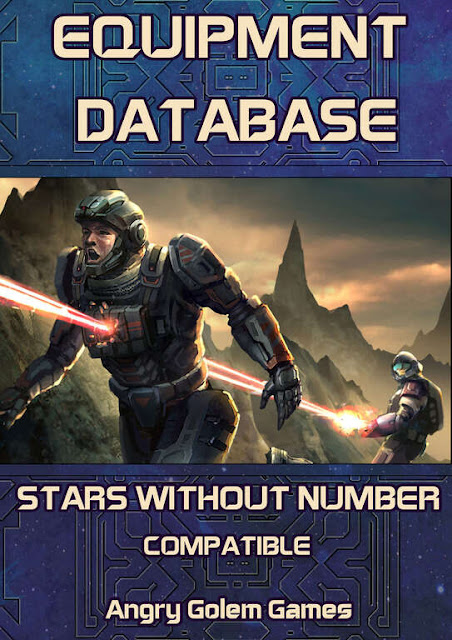 If your expecting oogles of sci fi artwork & fantastic equipment illustrations there's none of that. And that's fine for this sci fi rpg fan because we're interested in stats, suits, armor, weapons, & all kinds of mayhem inducing devices. And that's exactly what we get here! There are solid stats on, ' Armors, Ranged Weapons, Melee Weapons, Heavy Weapons, Ammunition's, Communications, Computing & Accessories, Field Equipment, Pharmaceuticals, Tools and Medical, Batteries and Generators, Vehicles, Drones, Droids, Cyberware and Misc. Equipment.' All of this comes in solid sixty two pages of ultra violence goodness that your PC's are gonna wanna use. 'The  Stars Without Number Equipment Database' isn't sit on shelf equipment & weapons but actual fighting & solidly made stuff that you can equip your PC's with or better yet your NPC's!
There's enough in sixty two pages to get a full on adventuring group equipped & ready to start kicking alien or human behind. And its well done. The book is well laid out & very much up to  ANGRY GOLEM GAMES standards.

'The  Stars Without Number Equipment Database' is a solid book which does exactly what it says on the tin & title. That is it gives you gobs of weapons, armor, & equipment for your OSR sci fi games & it does it well.