The Human Fly was a young twenty something year old man who survived a head on car crash. This unknown man was given any number of reconstructive surgeries which replaced a good portion of his skeleton was stainless steel. He was given only a ten percent chance of walking ever again. But this is the Marvel universe in the Bronze Age of the Seventies.. And through sheer mental determination & will power this unknown man was able to not only able to walk. He was able to develop  incredible strength, unflagging will power,  & he was able to do  incredibly complex arcobatic maneuvers. This man became 'The Human Fly' a stuntman for a wide variety of  charities. But in the Marvel universe of the 70's nothing is ever a simple as it seems. Time & again the Human Fly became embroiled with various Marvel super heroes. Time & again The Human Fly fell afoul of villains trying to rob his events of the monies due charities or of super heroes who had him mixed up with a super villain sharing a similar name. 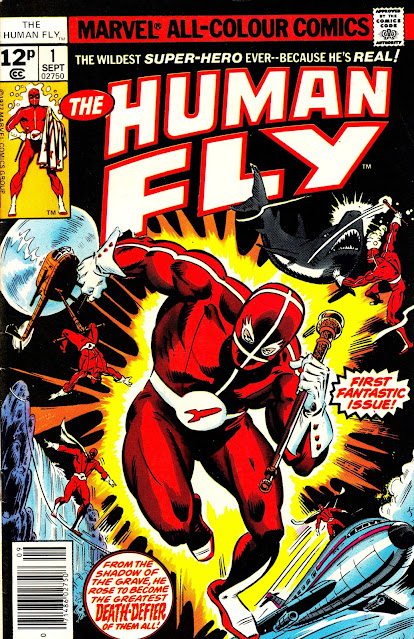 The Human Fly was is a stunt man extraordinare who in Astosning Swordsmen & Sorcerers of Hyperborea is a duel classed thief  of 6th & an acrobat of 4th  level. The Human Fly was always running afoul of strange Pulp like circumstances. Even travelling into lost worlds such as the prehistoric  Savage Land & weird underwater grottos.
The Human Fly 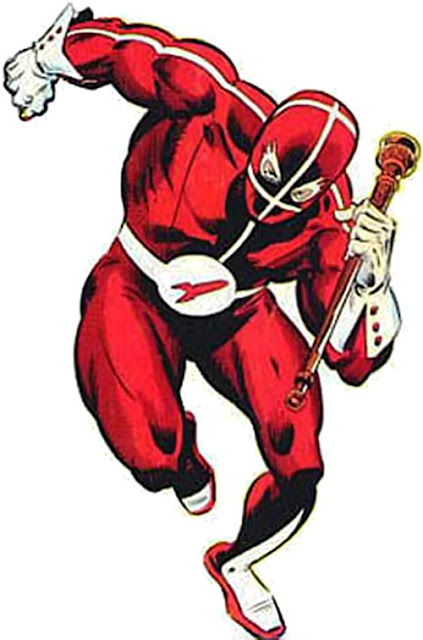 No. Encountered: 1 (unique NPC)Alignment: Lawful good Size: MMovement: 40 (swim 40)Dexterity: 16Armour Class: 6Hit Dice: 3Attack Rate: 1/1 or weapon Damage: 1d6/1d6/weapon (+3 cane of the stunt man)
Specials: 60 foot Darkvision, +2 on all hand to hand attacks due to training, Iron Will Power ( immune to fear based attacks), Nerves of Iron, Saving Throw: 16Morale: 10 Experience Points: 50Treasure Class: Q
The Human Fly is back up by a slick combination of a stunt time including his friend Locke who develops all of his one time use equipment. The Human Fly is able to use this special equipment  up to three times per day. Jet boots enable the human fly to fly as per the spell but very clumslly compared with a bird or other flying creature. The fly has used mini bombs 1d6 damage able to be tossed within a twenty foot radius.Special ropes with  built in Mag-clamp electro magnets tha stimulate the spider stick spell. Boots &  gloves with special  suction cups that allow the fly to use the equivelant of a spider climb spell enchantment for the sides of buildings, walls, ceilings, etc. The human fly carries a +3 cane of the stuntman made for him by his techican & buddy Locke. Cane of the stuntman has the following abilities  :
The Human Fly is known in certain circles of the Marvel universe as force for good for charity. 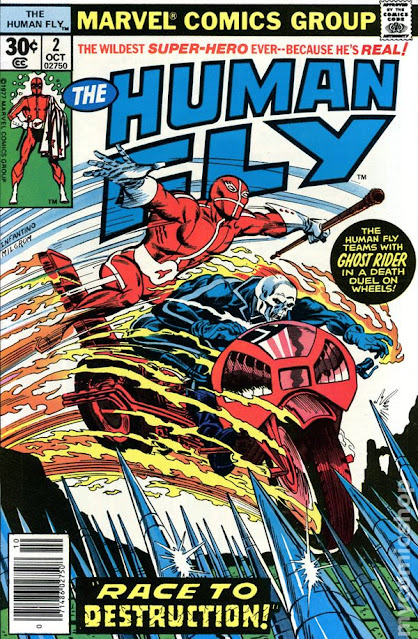 The Human Fly generously donates all profits he makes as a stuntman to charity, and genuinely wants to help the unfortunate. He is more than willing to let other heroes deal with the bad guys if innocents are present. Seeing to their safety first before (inevitably) springing into action. He could easily end up on Hyperborea getting involved with other super heroes or mystic menaces such as dark wizards who could see using his audience for his stunts as a sacrifice to some unknown occult horror or Lovecraftian god. The Human Fly will bend Heaven & Earth to save any innocents. His personality  will be a stark contrast to the hard Sword & Sorcery reality of Hyperborea.

The Human Fly comic book by Marvel ran from 1977 through 1979 based on the stunt work of Rick Rojatt.
Posted by Needles at 5:45 PM