Hunter II's introduction came for me at least came in 'Hunter II: Goblin' from Eerie magazine issue No. 68 (September 1975) from Warren Publishing. Hunter II isn't Hunter I aka Damian Hunter which we've covered previously on this blog right here.  Hunter II takes up the mantle of Hunter but is actually a young fully human warrior named Karas. Karas faces down a new, artificially bred race of mutants who preyed upon humanity, this time on the behest of evil wizards. 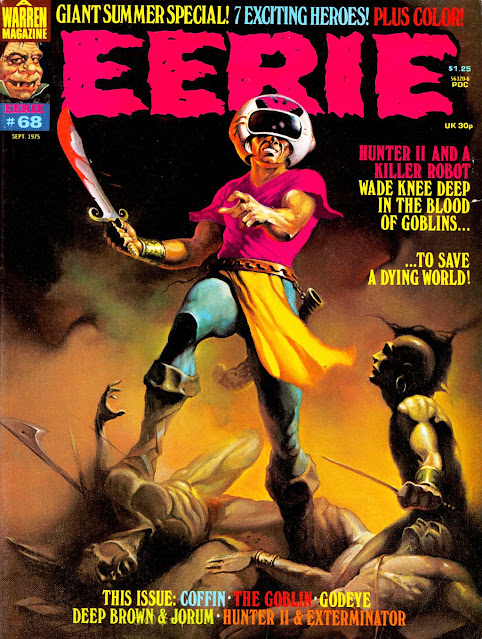 Hunter II: Goblin' from Eerie magazine issue No. 68 (September 1975) takes place much further down the time line of the Hunter timeline & universe. Karas. aka Hunter II has taken up the Manhunter mantle at the behest of his patron the wizard Mandronana. The Earth is ending due to a natural slow down & breakdown of time, Karas.get's an unexpected hand from the last of the Eterminator mutant & undesirable cybernetic hunter robots. Exterminator II literally has hundreds of years experience & passes this onto the young hunter.
Hunter II is a high end level four hunter but a lower level 3rd  or 4th level ranger. He has mutants as his enemy.  Hunter II lacks experience of his predacessor. Hunter II also lacks the racial mutant advantages that the first Hunter had in spades. Hunter II does make up for this with sheer will power & determination! Hunter II is proficiaent with many different types of primative weapons. This also includes bows & arrows, knives, and some relic weapons such as a laser pistol.
Hunter II Aka Karas 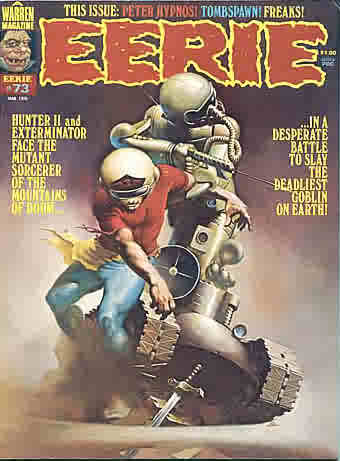 Hunter II has been known to use a laser pistol Damage 1d6, Range 40 feet, 15 Ammo on loan from his wizard master Mandrogna. Hunter II could potentially be a pawn of a magical artifact or super science gizmo to planarly transport himself to Hyperborea. Hunter II has in point of fact been a pawn of the Crystal of Ages. So Hunter II could find himself at the mercy of the Crystal of the Ages or its master finally entering into the circuit.