What do you get with a gang of Old West hooligans right in the middle of an isolated adventure location out in the middle of nowhere squared with bloodshed and violence on their minds? Well you get is the film the Hateful Eight by Quentin Tarantino. We got the extended trailer today and it looks like a nasty piece of work.

So at some point today the new version of the Hateful Eight film trailer surfaced and I've been all over this film like stink on a corpse. There are some great reasons to be excited by this film. An all star cast is one of the first reasons, this is the second Western that features some fantastic images. The plot is straight out of a Sixties pulp Western film. But what does this film have to do Weird West role playing? Everything kids, everything in a nutshell. The Synopsis goes into a bit of the details of the film.

Synopsis:
In THE HATEFUL EIGHT, set six or eight or twelve years after the Civil War, a stagecoach hurtles through the wintry Wyoming landscape. The passengers, bounty hunter John Ruth (Russell) and his fugitive Daisy Domergue (Leigh), race towards the town of Red Rock where Ruth, known in these parts as “The Hangman,” will bring Domergue to justice. Along the road, they encounter two strangers: Major Marquis Warren (Jackson), a black former union soldier turned infamous bounty hunter, and Chris Mannix (Goggins), a southern renegade who claims to be the town’s new Sheriff. Losing their lead on the blizzard, Ruth, Domergue, Warren and Mannix seek refuge at Minnie's Haberdashery, a stagecoach stopover on a mountain pass. When they arrive at Minnie’s, they are greeted not by the proprietor but by four unfamiliar faces. Bob (Bichir), who’s taking care of Minnie’s while she’s visiting her mother, is holed up with Oswaldo Mobray (Roth), the hangman of Red Rock, cow-puncher Joe Gage (Madsen), and Confederate General Sanford Smithers (Dern). As the storm overtakes the mountainside stopover, our eight travelers come to learn they may not make it to Red Rock after all…
Basically you've got a ready made movie to drop your own party of adventurers & desperadoes right into the thick of events and things happening. 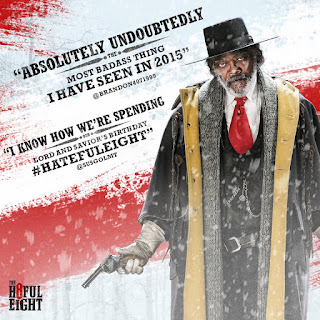 What the Hateful Eight signals is the return of the pulp Western to the screens of movie theaters at a time when this genre needs a shot in the arm. This also means that people are going to be moving back into the Western role playing game. One of the simplest and easiest old school TSR to pick up was Boot Hill. 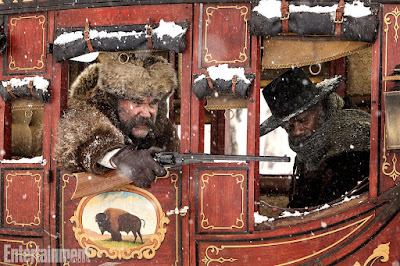 So basically everything you could want in a fast pick up old school Western adventure is loaded right into the front end of this movie. You've got a complete set of vile NPC characters waiting on cash and desecration in the middle of all of it is a great motivator for a mini campaign set against the events of something like this film's plot. This doesn't have to be a very complicated game adventure at all or rather it can be. The events and motives of the NPC's are outlined and then spun into play as the session plays out. Now when it comes to adding in more background to your favorite PC's? Well, AD&D first edition has always been a popular choice or you can go with for background. Or select one of the other fantastic games and retroclones I've outlined in this article HERE  .Now that being said, the Hill Canton's blog has some great resources for fast packing a group of NPC's or adventurers in the Old West very quickly with some killer tables that he had worked out. He also worked up a points system which could easily apply to this style of game. This poster below  for the film reminds me of something completely different though. 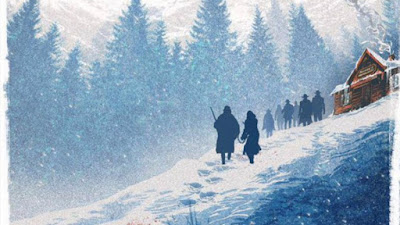 Now back to the movie for a second this sort of a film's plot has the potential for another completely off the wall style of adventure. Yes I'm actually thinking of the 1982 film the Thing. Eight people out in the middle of an isolated location caught in a blizzard and now combined it with Gamma World 1st or 2nd edition, you've got another adventure all together.

So already I'm saving my pennies and looking forward to seeing this little charming piece of the old ultra violence. Maybe its the snow and the location, the cast, and fact the Kurt Russell is in this one. But man I'm excited to see what we're in store for.
Posted by Needles at 2:58 PM