So it's Nineteen Seventy seven or Seventy nine and I'm sitting down with my grandmother Rose on Christmas day. I get a copy of  Gnomes  by Wil Huygen and illustrated by Rien Poortvliet. 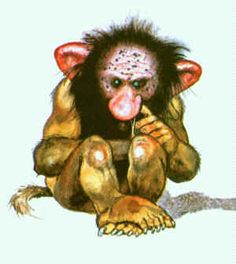 And I pretty much fascinated by the book. Everything else pretty much falls by the wayside for all of three or four hours. So we're now in Twenty Fifteen and six copies later I've still have the book with me. In point of fact I'll be using it tonight. But its not the Gnomes who fascinated me it was the trolls. By the way those are not actually gnomes per say they're actually Kabouter. But that's a story for another day, so flash forward to the Monster Manual in Eighty One or so. My copy of the Monster Manual is sitting next to me along with the D&D booklets. And I'm planning out my next AD&D campaign at the time. Friends of mine were complaining about AD&D not having monsters like out of mythology and horror films. What they were really angling for was Deities & Demigods like encounters but they got something different. Gnomes contains a good solid section about the various foes of Gnomes written in the voice of  David the Gnome. Whom later on would turn into a kids cartoon which ran in the Nineties and might still be in reruns. 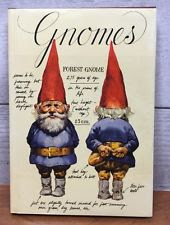 The trolls of the world of Gnomes were incredibly dangerous and were killers and torturers of gnomes throughout Europe. This was heady stuff for a kid to read and were quite a step up from the usual species of trolls found in most D&D books. They're described as stupid, greedy, incredibly dangerous, and one derivatived from a variety of mythological sources including bits of  Norse, Scandinavian, English, and European  folklore. When the Fiend Foilo came my way so too did a pack of Troll subspecies and that's where Dr. Huygen's Trolls & Poortvliet's Goblins came from. 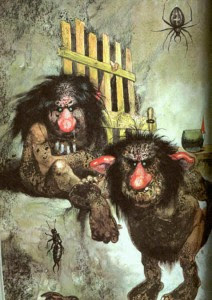 Number Encountered: 1d4
Alignment: Chaotic Evil
Size: M
Movement: 40
Dexterity: 7
Armor Class:6
Hit Dice: 5
No Attacks: 3(Claw/Claw/Bite) or By Weapon
Damage: 1d6/1d6/2d6
Saving Throw: 14
Morale: 9
Experience Points: 200
Treasure type: C
Huygen's Trolls are a subspecies of the common troll and unlike their more dangerous relative this species of troll are slightly smaller at less then six foot tall. But make up for their lack of height with a cruel and evil streak a mile wide. Huygen's Trolls  are a malicious and slovenly lot of humanoid horrors who live in caves and cavern works preying on nearby communities. They eat both humans, Fey, cows or any other creature they can catch and cook. Huygen's Trolls are very greedy and crave treasure above most else. They love the scent of blood and entrails.
They are often employed by local wizards and warlords as muscle and raiders. They are of average intelligence but very cunning and dangerous.. These horrors know human technology and have been known to wield enchanted blades, use magic, conduct coordinated raids on farms, villages and the like. This subspecies of troll speaks the tongues of men, Fey, and Troll kind. They may breed with humans, the result of these abomination of  'unions' is always a creature of troll kind. These beings often willingly serve the cause of evil and Chaos with abandonment.
Special abilities -
Dark Vision up to a Fifty foot radius.
Acute Sense of smell  Able to smell prey within one mile unless up wind
Regeneration after three rounds after sustaining damage, wounds heal at a rate of 3 hp per round. Unless fire, acid, is the cause of damage. They will not fully regenerate if killed and fire is applied to the corpse.
Poortvliet's Goblins 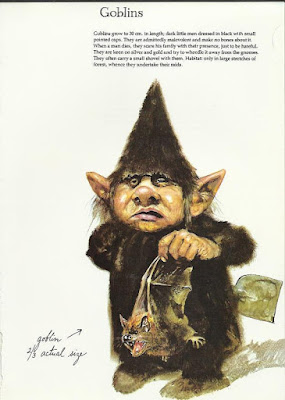 Number Encountered: 1d6
Alignment: Chaotic Evil
Size:S
Movement:50
Dexterity: 7
Armor Class:8
Hit Dice:3
No Attacks:  By Weapon or Magic
Damage: By Weapon (see below)
Saving Throw: 14
Morale:6
Experience Points:200
Treasure type: C
There are small humanoid species that are distantly related to Goblin kind, Poortvliet's Goblins are small malevolent little manling like beings that live and haunt the deep woodlands far from civilization. They are beings who live close to the howling and haunted graveyards of ancient kings and forgotten races. From these places they have learned secrets of black magic and forbidden lore. This race of Fey like beings have been twisted by their closeness to the blackness of magick.  Poortvliet's Goblins haunt graveyards, dungeons, and other fringe places in search of magick, treasure and gold. They are hateful things that wield magic as third level black wizards and can curse men with rotting and wasting diseases upon the new moon. They use blow guns for one point of damage and their darts coated with horrid poisons that cause victims to save vs death or die in agony. They create dead falls, traps, snares and worse for adventurers in their territories. They've been known to haunt prominent families of the recently dead for gold,treasure, ransom or 'favors' or they will kill the first born sons and daughters of  simply out of spite. They willingly serve chaos and evil out of sheer principle. Poortvliet's Goblins continue to grow in number because they are able to convert victims into new monsters of their kind. They are highly intelligent and dangerous beings of evil. Poortvliet's Goblins are considered a disease on the face of humanity by many clerics and scholars of Law.


This post is for educational purposes only and is not an attempt to violate the trade marks or copyrights of the holders of the Gnome properties or Pan book LTD. This simply the rabid ramblings of a Gnome and AD&D, D&D and retroclone  fan.
Posted by Needles at 11:14 AM