A howling sand storm blows across the desert sands forcing your party to take shelter in a set of ruins that has been lost to the ages. Welcome to the B4 adventure The Lost City, for original Dungeons and Dragons! 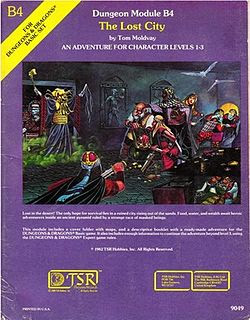 There are OD&D modules that I avoid not out of ill reputation but of a certain amount of respect for the material. I'll try to explain why, way back in the annals of first getting back into my second round of D&D role playing with the Basic Set of Dungeons & Dragon's The Lost City By Tom Moldvay
was the go too module. It has everything I really required for playing a basic swords and sorcery adventure.
A lost ruin in the middle of a desert environment, odd factions living under weird conditions, black magic of the pulp variety, and all of it tailored to hand walk a dungeon master through his first pulpy mega dungeon in the middle of a lost world setting.
Believe it or not Wiki actually has a very good breakdown of the plot components of this adventure; "
The adventure follows a city buried in the desert, which is torn between warring factions.[1] Much of the adventure takes place within a huge step pyramid.[1] Other areas of the city are merely outlined, with suggestions provided for the DM to provide detail.[1]
At the beginning of the adventure, the characters become lost in a desert sandstorm and stumble upon the entrance to a pyramid. The pyramid and the underground city beneath it are located on the site of the ancient ruined city of Cynidicea and inhabited by the descendants of the city's people. These Cynidiceans, now regressed to a subterranean species, are addicted to narcotics and spend most of their time in drug-induced reveries, wandering around in costumes and masks."
You've basically got a mix of Robert Howard's Red Nail style factions with Michael Moorcock's  Meliboreans mixed in with bits and pieces of the Morlocks and the Lotus Eaters. Another issue were the traps there were a ton of them and they were both logical and deadly. Your thieves had to think on their feet. 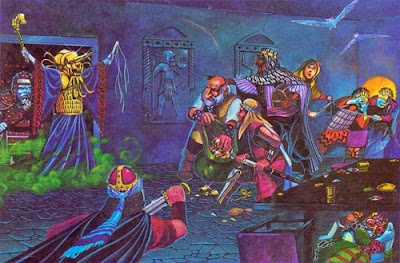 "As the adventure progresses, the characters discover that a monster known as Zargon was responsible for the downfall of Cynidicea. The monster still lives, and a cult of evil human priests and various other monsters has grown up around it. Besides the priests of Zargon, there also exist three other factions of relatively normal Cynidiceans. They worship the city's ancient Gods and are dedicated to the overthrow of the priests of Zargon and the restoration of Cynidicea's lost glory, but their diverging faiths have disallowed them from working together against their common enemy."  Another thing about the dungeon crawling within the city's urban decayed and ruined landscape was the lack of treasure B4 was a tad on the light side of the loot. But that was how many of these early efforts were.
And here's where the Lost City shined and caused many dungeon master's complete head aches. 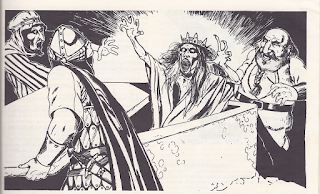 "Although only the upper half of the pyramid is detailed, enough information on the lower half and the underground city is provided for the DM to expand the adventure. After clearing the upper pyramid the players can become involved in the struggle for Cynidicea and, if they grow powerful enough, confront Zargon in his lair and destroy him."
Basically the Lost City is a DM primer on the care and feeding of mega-dungeons, you've got a ton of things all happening within the ruined city regardless if your PC's come along or not and its really up to the DM to keep the action going. This module was really my first exposure to the great art  by Jim Holloway. 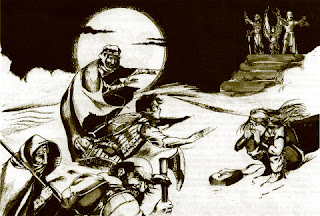 There are elements of HP Lovecraft within the module especially the 'god' Zargon, the doomed mushroom farmers are straight out of Robert Howard's Red Nails along with the very weird but dangerous factions. There are a ton of 'Lost World' setting details that remind me of the later books of the Pellucidar series by Edgar Rice Burroughs. The real potental of the Lost City is the fact that its so flexible and interesting there's plenty that can be done with it. A dungeon master could keep a mini campaign going in this ruined urban environment for months pitting on group against another while exploring forgotten rooms and weird twisting bits of ruined galleries. 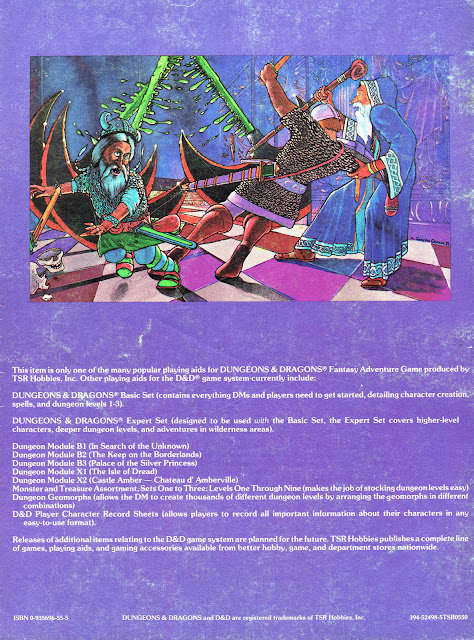 One of the things I've seen done with the Lost City over the years is to go back time and again to explore one or more galleries of the one hundred rooms while trying to avoid the various factions still fighting after the destruction of the 'god' of the piece. This was one of the first modules to really challenge the metal of the PC's while taking them on a journey into the heart of Cynidiceans and their twisted history. Plenty of this adventure reminded me of Red Nails by Robert Howard. I strongly suggest reading this Howard piece before attempting to run B4.

Techotl pointed to a black column of ebony which stood behind the dais. Hundreds of red dots scarred its polished surface — the bright scarlet heads of heavy copper nails driven into the black wood. "Five red nails for five Xotalanca lives!" exulted Techotl, and the horrible exultation in the faces of the listeners made them inhuman.


But is the adventure still relevant to players today? Not only is it but the clear, concise advice on world and campaign building is sharp to the point and makes a very clear cut answers when it came to up keep and creation of dungeons, ruins, and monsters. Indeed the mini sandbox nature of The Lost City is as strong today as it was when it came out. It puts the creation aspect of its dungeon squarely on the shoulders of the dungeon master and it doesn't let up on that point.

The other aspect of the Lost City is the sheer brilliance and weirdness that the adventure oozes from every single corner of it. The sand storm, the urban ruined landscape, the sheer amount of dungeon crawling. Everything fits together like a hand and glove while dealing with some major adventure elements in the middle of all of the ballyhoo. Things are designed take full advantage of the dungeon master's skill by providing a ton of support in the back drop but really all of the later section encounters are yours to fill in and take advantage of your adventure set ups and monster encounters along with room content, treasure, etc., etc. I can pull the module off the shelf and run it with just about any edition of the game. There are ton of very interesting and colorful NPC's in the Lost City if A. The PC's don't kill them and B. They are used by the DM well. The NPC's can be used to hang the entire adventure together if used carefully.

You can pretty much use this adventure straight out of the box with no issue at all, this makes the adventure appealing for a whole host of OD&D style retroclone systems. Everything from Lamentations of the Flame Princess to Swords and Wizardry in addition to Labyrinth Lord. All in all B4 The Lost City remains one of my all time favorite modules to reach for. Its easy to run, very cool, well designed, tightly written and one of the easiest to customize to your own campaigns