There are adventures you never forget and adventures that during play come to bite you in the behind. Danger At Dunwater is a surprisingly well written but sparse adventure that plays like clock work and one that frustrates the hack and slash player and makes the party investigate the goings on of the Lizardmen they heard about in the Sinister Secret of Saltmarsh U1. 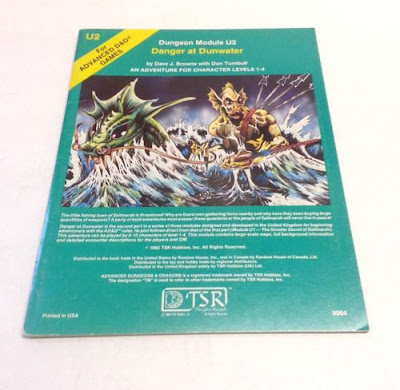 Danger At Dunwater is the second in the "U' trilogies of adventures and pits the characters into the aftermath of  The Sinister Secret Of Saltmash adventure and meshes right into the front and back adventure plots U1 quite nicely.  Danger At Dunwater was designed for 6-10 characters of level 1-4 and it can be a mean little adventure. The PC's  must track down Lizardmen to their lair, to stop them from massing for an assault on the town of Saltmarsh.
But of course not all is as it seems, when you dive below the surface of Danger At Dunwater, the real enemies begin to reveal themselves for who they really are. 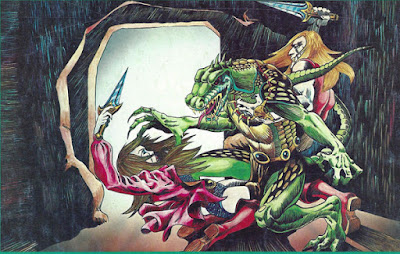 There's a bit of investigation, wilderness adventure and a fair amount of dungeon crawling in U2. There's also a creepy Lovecraft vibe running through the action in this adventure and yet I've had more then one hack and slash player complain of the lack of combat because they had to use their brains to figure the ins and outs of the goings on in Saltmarsh. Danger at Dunwater by Dave J Browne and Don Turnbull (TSR, Inc., 1982) is an adventure that builds on the events of Sinister Secret of Salt Marsh and then twists things around for the PC's. 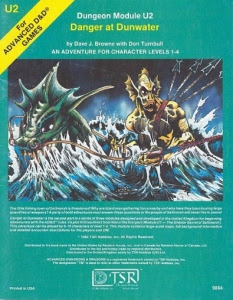 Because of  the set up of the alchemist's mansion in U1& some of the items that the PC's have found and because I was running Sinister Secrets of Salt Marsh with the Astonishing Swordsmen and Sorcerers of Hyperborea rpg I inserted the map from Forgotten Fane of The Coiled Goddess adventure into the ongoing plot of the U series to keep the action going for the next leg of the campaign. I know that its an old trick but it worked and provided a much needed hook to keep the action moving along later. The action centers around the fact that the Lizardmen have been buying pretty advanced weapons for what authorities feel is the slaughter of Saltmarsh and its surroundings. Adventures from around this time were made to a pretty high standard and you've got NPC's and even the monsters with their own motives, personalities, and goals. They're not their to simply be slaughtered. 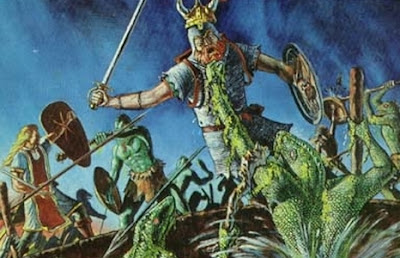 The town of Saltmarsh itself plays one of the central rolls in Danger At Dunwater and the dungeon master is supposed to flesh this town  adventure setting out for themselves. Now over the years I've heard of friends and other dungeon masters taking the town from The Secret of Bone Hill by  Lenard Lakofka   using it as Saltmarsh and its environs. The adventure in and around the fishing port of Restenford which fits squarely into the plot and details of Danger At Dunwater. There's a very nice little thread about combining these two classics together on Dragon's Foot. Can it be done and should it be? Well in my humble opinion, yes its easily accomplished and yes it does work. The process really enriches the events of the U series of adventures and gives the events of The Secrets of Bone Hill a resonance with players that helps to build a mini campaign in the regions of Greyhawk. It also feeds into the flavors of both Dunsany and Moorcok that the U1 and U2 seem to echo with. The U series really has the British sense of the gritty fantasy that would later come to hallmark the UK series of TSR modules. They're distinct in some ways, they have a far different feel then other TSR modules from the time. So rather then spoil the adventure plot lines of the U series I wanted to take a moment to really address some of the reasons why I keep using AS&SH for running the U series. The level of the PC's for the FORGOTTEN FANE of the COILED GODDESS is  four to six characters of 5th through 7th level.  By running the PC's through the U adventure series the adventurers are ready to tackle the hazards and weirdness of the Forgotten Fane. They're not going to balk at some of the hazards of this module. The sea themes of  Danger At Dunwater and Sinister Secret of Saltmarsh, speak of far off lands, tales of old sailors, and the lore of lost islands. This is exactly the sort of vibe that the Coiled Serpent goes for. By simply changing out the real enemy of the U series for Lovecraft's Deep Ones you have a deeper tie in for AS&SH. Something very simple that makes all of the difference in the world. This module could also easily be adapted with a bit of conversion work into Lamentations of the Flame Princess. The gritty feel of the adventure, how it handles magic and some of its low level adventure elements are ideally suited for LoFP's no nonsense approach to OSR adventure gaming. The amount of treasure should also be adjusted for both retroclone systems. Sometimes with these adventures less is more. 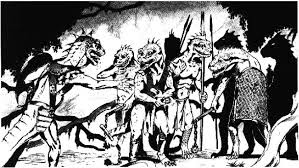 For myself once the events of Danger At Dunwater are wrapped up the party is ready to advance to U3 The Final Enemy and we'll go over that one sometime in the next day or so. If you haven't gotten in on Astonishing Swordsmen and Sorcerers of Hyperborea's adventures now is deffinately the time to do so. Jeffery Talanian has a sale going on,"For my gaming pals out there, my small press RPG outfit, North Wind Adventures, is having a 15% off sale on all in-print adventure modules. Stop by my website, www.hyperborea.tv and enter code BLACKFRIDAY15." 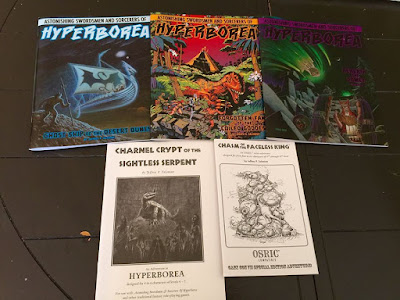 Danger At Dunwater is another high mark in a series of modules that helped to define a certain era in TSR. Do I think its worth playing and DMing still? Yes I do in spades.
Posted by Needles at 11:03 PM