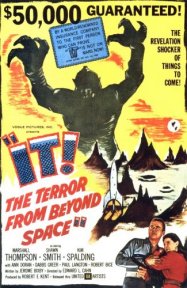 It The Terror From Beyond Space is set in the 1970's of the future via 1958 and it pretty much has everything an old school DM needs to set up plan out and get into a space based campaign. The plot was/is such an influence on the film Alien by Ridley Scott that in places it might as well be a partial homage. Be that as it may, Dan O'Bannan who wrote the script and ideas for Alien sited it as a major influence on his film. Part of the brilliance of Alien is its combining various old school 'clunker' elements from these Fifties classics into a slick 80's haunted house film the likes of which no one had seen. But back to the future of our alternative 1973 through 'It'.

Make no mistake, It has a lot to offer the DM of a D&D style space opera or old school campaign.


Right off the bat we've got nuclear rocket ships zipping around the solar system and possibly out to some distant outpost possibly around Pluto or beyond the solar system to remote prospecting locations. Here once again Mars is the drop in location point for a very nasty and dangerous alien bio weapon. 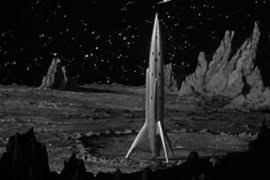 Here's the plot according to wiki :

The film opens with a nuclear-powered spaceship perched on the cratered surface of an alien world. A voice-over tells us the year is 1973, that the world is the planet Mars, and the spaceship has been sent to rescue the crew of a previous, ill-fated mission to the Red Planet; they have found only one survivor, Col. Edward Carruthers (Marshall Thompson). He is suspected of having murdered the other nine members of his crew for their food and water rations, because he would have no way of knowing if or when he would ever be rescued. Carruthers denies this allegation and pleads his innocence, blaming the deaths on an unknown, hostile life-form encountered on Mars. He offers up the first incident: caught on the surface during a blinding Martian sandstorm, one of his crew mates was quickly plucked by something unseen from the crew's moving transport vehicle, It running fast enough to keep pace. The rest of his crew began firing their weapons but without success due to the blinding the creature.

The crew finally dispatches 'It' with explosive decompression after the monster dispatches many members of the crew 'Ten Little Indians' style. The crew has a boat load of weaponry on board for various close encounters including conventional fire arms and a bazooka!


None of which works at all.
More over HERE 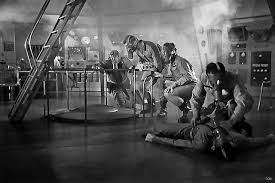 Yet where did such a monster such as 'It' come from? The conventional wisdom indicates that it came from the pulp laden wastes of 1950's space and that there are a plethora of this species out there in the black depths. I doubt 'It' very much. I've got another theory that I've been carrying for a few years.

'It' is the mutated form of one of the other crewmen from Col. Edward Carruthers's other crew who stumbled upon something akin to the Prometheus black goo. The material quickly went about its business over the course of a day or more and the result was 'It'. The creature retains enough of its human facilties to carry out and recognize who, what, and where of its human prey but its in a completely adapted alien form. Something about Col. Edward Carruthers's attitude throughout the film has bugged me since I first saw 'It' way back on the early 80's channel eleven Million dollar movie way back when. Its like the Colonial is expecting 'It'. 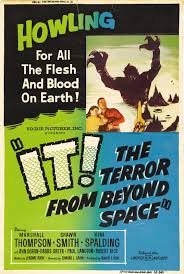 The monster is extremely familiar with Earth technology as well, opening hatches, knowing where to hide, using tactics,etc. This suggests to me that 'It' is one of the original crew that Carruthers was a part of and they stumbled upon a mutatgentic compound on Mars. The stuff was programmed to mutate a life form into a bio weapon and we know the rest. This also explains the monster's weakness to decompression whist shrugging off bullet's like rain drops.
I've recently used 'It' in a Mutant Future one shot and here's some of the stats from that on the creature

It The Terror From Beyond Space

It The Terror From Beyond Space is a murderous psychopathic bio weapon created from the mutated crew of  a failed expediation to Mars after an encounter with an ancient alien artifact. It in fact is a mutated member of the  Martian Expedition under the command of  Col. Edward Carruthers, and still retains a hatred for him as well as any humans that the monster encounters. The beast carries out its ancient preprogrammed menu or murder and mayhem all of the while looking for more choice humans to infect with the nanite alien artifacts that swim through its veins. The creature is able to do a choice bite for 1d4 points of damage that will infect a human with the mutagen nanite virus that will slowly turn the victim into another horror like it. The wicked teeth of the monster normally do 1d6 points of damage to any flesh they encounter and can sheer through flesh,bone, and even light metals with easy.
The drawbacks of this mutational bio weapon are that the creature's body requires human blood to sustain its incredibly alien structure, after 1d4 weeks the monster must consume at least a pint of blood a day or begin to fall into a sort of torpor like hibernation period. This can last a century or more. The body adapts to the atmosphere around it and will spring to life when prey is nearby.

The beast has a 50% chance of adapting to alien environments and conditions when it encounters them. But with the use of decompression the creature's mutated bodies and organs can not compensate for the changing conditions quick enough.
These beings are found out in the wastes from time to time when some colonist or spacer stumbles upon an ancient cache of the bio weapon creation

The world of 'It the Terror From Beyond Space' is the perfect backdrop for an old school space based game. Everything is great for your favorite retroclone space based game such as Terminal Space or even Stars Without Number for a retrofuture atomic rocket laden campaign.  This is the back drop of pulp style games with rockets zooming between star systems and adventure awaiting around every corner. 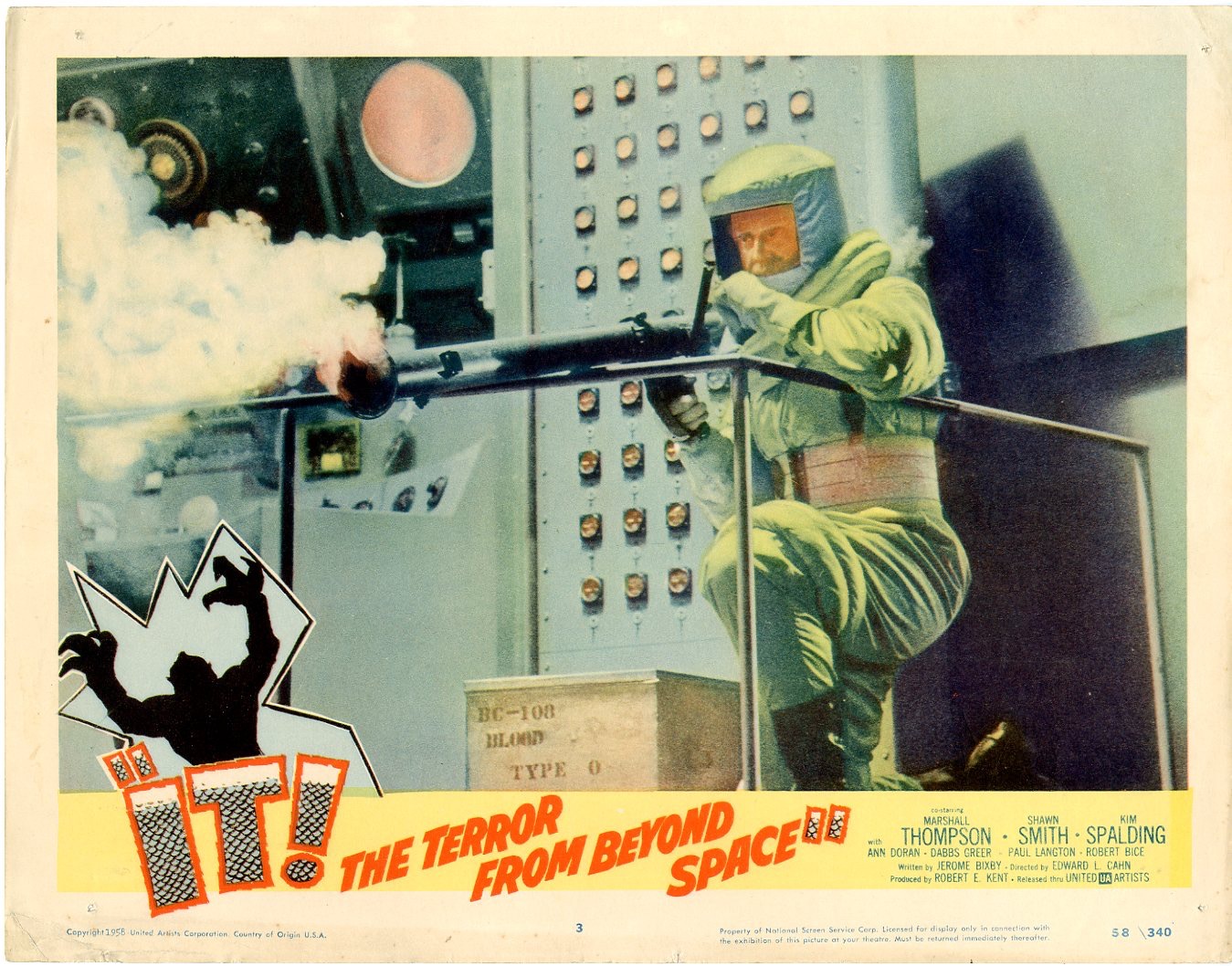 I've used these games over the last couple of years as yester year one shots with a great deal of success. They're easy to have a party pick up on with something like either Prometheus or Alien as the retro future point but they can also be used to run such things as Barsoom or any other pulp style campaign.

Another fact that rarely get's mentioned about the film, where exactly did the other expedition pick up the monster? Is there a megadungeon or alien wreck that the good Colonial failed to mention just waiting back on Mars? I think so.
With a clear Promeathus style connection its really easy to see how to knit this back unto a retroclone space based game. Time and again this formula has worked for me to be able to get players who normally wouldn't bother with an old school D&D style game. The nuclear rocket is a great little adventurer craft as well with a slightly smaller crew capacity that with a small hyperspace or Spike drive enables a DM to get his adventurers where they need to go without the hassles of an Enterprise sized craft.


All in all 'It The Terror From Beyond Space can be a great jump off point or a great one shot source of material for any old school campaign. These days this classic remains mostly forgotten and not as well known as it should.
Posted by Needles at 8:46 AM