Even as the winds blow across the post apocalyptic wastelands, there are strange and unexpected visitors to the shores of small planet. Some of these are aliens from other worlds and still others are from beyond the bounds of small Earth. Here are a selection of strange and weird artifacts left behind after the lights from the Wastes have faded. 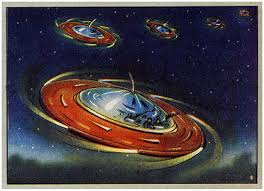 This table was inspired by the old 70's television show UFO.