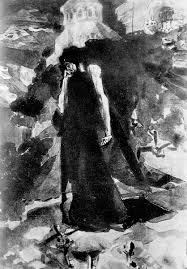 There are mysterious items that sometimes get left behind on the battlefields where ancient gods clash and still do battle after the end of the world. Some of these old and ancient terrors don't realize that their time has past and they leave traces behind in some of the old places and forgotten haunts of the Ancients. Some of these are fabulous treasures and others are weird relics left behind after all have left the fields of the gods. Here then are a small selection of some of these these items which can be stumbled upon by your mutant adventurers in the deepest wastelands and deserts.
1d10 Random Treasures & Finds Left Behind
On The Battlefield Of The 'Gods' Table