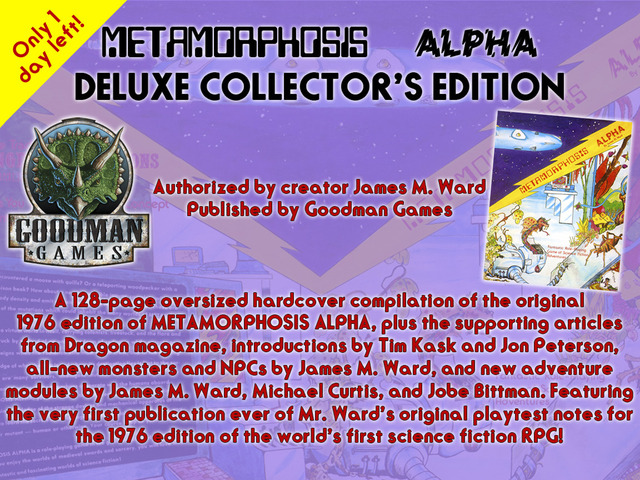 You can find a ton of information on restoring one of my all time favorite old school rpg products. You can find all of it right over.
HERE
I have a serious weak spot for this particular rpg, it was the second or first old school rpg that I ever played in up state New York back in 1976. I was six years old at the time and I was in a smoke filled room over my babysitter's house. I had just rolled up my first PC and my mutant, a bunch of explorers were moving cautiously through the corridors of  the  'Warden'. A blinding flash of leopard spots and moment's later my PC's throat was a ruin of blood. My mutant warrior was bleeding out on the floor of the space craft deck.
The rest of the party tripped into a waiting man eating mutant plant abomination but I was hooked on the game.
Now Goodman games is in partnership with James Ward for a solid stacked 1st edition of Metamorphosis Alpha as a hardback.
This edition is going to have all of the classic articles from Dragon included and in addition more adventures on the way. 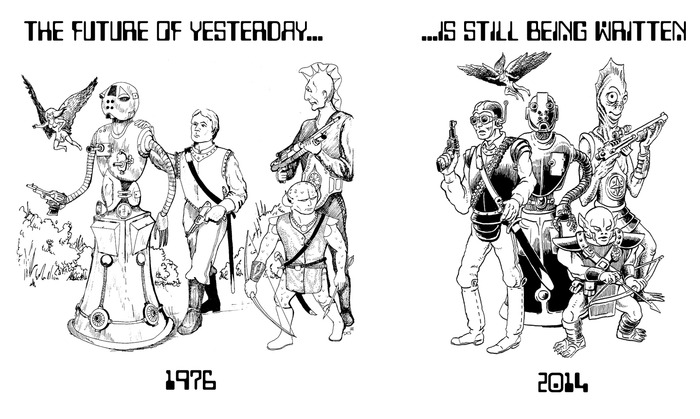 I've heard Metamorphosis Alpha described as Gamma World's older brother. While Gamma World is one of the all time classics of the hobby. Metamorphosis Alpha is still my choice for post apocalyptic space action. This is isn't simply a classic but a key choice of game for outer space action and adventure. The game is wide open for the DM to DYI the setting in a way that allows them to put their own unique stamp on it.
Gary Gygax wrote of the game :

“Furthermore it blends fantasy with weird and super science in a unique manner that is captivating to players with imaginations suited to such a startling mixture. METAMORPHOSIS ALPHA – in any edition – stimulates the imagination, encourages keen thinking, and breaks the mold of typical fantasy and science fiction roleplaying games. If that doesn't make it one of the best hobby games ever, I don’t know what would.”


METAMORPHOSIS ALPHA is a science-fiction tabletop role playing game in which the players are passengers on the interstellar colony ship Warden. Struck by radiation, the ship’s occupants have mutated into unusual and deadly creatures. After several generations, they have little or no knowledge of how to use the technology around them. Now tribal barbarians, they struggle to survive amidst a backdrop of advanced technology, mutant monsters, and the vast spaces on an intergalactic colony ship.
METAMORPHOSIS ALPHA spawned the popular GAMMA WORLD role playing games. When first published in 1976, METAMORPHOSIS ALPHA received rave reviews. From The Space Gamer #10, Feb-Mar 1977:

“The rules are logical, simple, and straight-forward. Each section of rules is well-outlined and usually followed by a detailed example of play… Overall, the facets of MA’s makeup are superb. The game is definitely first rate and quite excellent. MA is highly recommended to someone interested in buying their first role-playing game since the rules are rich with guidelines to help the player in constructing his own ship.” 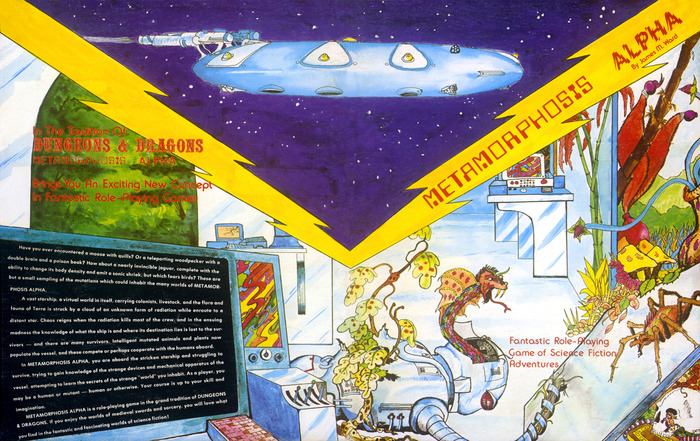 Here's why I'm really quite excited about this:

In 2001, the rights to METAMORPHOSIS ALPHA reverted to creator James M. Ward. Mr. Ward has authorized Goodman Games to publish a single printing of the METAMORPHOSIS ALPHA Collector’s Edition. This deluxe oversized hardcover will reproduce the original 1976 printing verbatim. This Kickstarter also allows for the production of new material by Mr. Ward and other METAMORPHOSIS ALPHA designers, including new monsters and NPCs, and several new adventures. The hardcover will also include a collection of the many magazine articles published in support of the original edition since 1976, a series of introductory and historical articles, an interview with Mr. Ward, period reviews of the original publication, consolidated tables for ease of reference by the game master, and a brief errata for the original printing.
In the interest of ensuring a timely release, this Kickstarter has been launched after the completion of most content. All text content is complete:  not just the original 1976 content and the magazine articles, but Mr. Ward's new NPCs and monsters, the new adventures, the introductions, and all new articles. Editing and layout have already begun. This Kickstarter will fund completion of art, which will commence immediately upon the Kickstarter's conclusion, and the very expensive print run.
Finally, this collector’s edition will feature the very first publication ever of Mr. Ward’s original notes from the first pre-publication playtest session of METAMORPHOSIS ALPHA ever conducted with Gary Gygax and Bryan Blume of TSR Hobbies in Lake Geneva, WI. These playtest notes provide a window into history as they reveal the origins of the game and the early rough draft approach of Mr. Ward, who would go on to become one of the industry’s senior designers.
The New Adventures
So here's one of the part's of this kickstarter that is really exciting to me. We've got brand new material coming out for the MA rpg. Adventures,new monsters, NPC's and more . 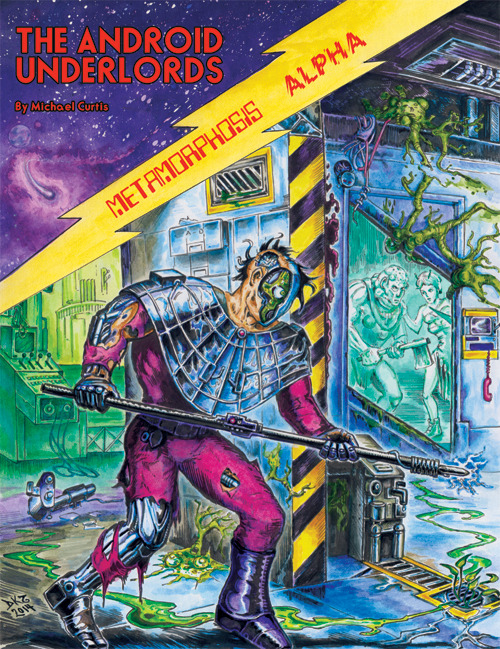 Here's more of the details below. I'm super excited to see this! It's a very good time to be an MA fan. Here's more details on the Adventure modules from the Kickstarter.

Goodman Games is a strong advocate of gaming through play. Collecting is good; collecting and playing is better. To facilitate additional play of METAMORPHOSIS ALPHA, especially among fans who have less time to game than they did in 1976, Goodman Games will use this Kickstarter to fund a series of adventure modules for METAMORPHOSIS ALPHA. These adventures will be produced to the same very high standards as our Dungeon Crawl Classics adventure modules. They will be stand-alone, self-sufficient, and ready to play “out of the box,” allowing the game master to drop them into any METAMORPHOSIS ALPHA campaign. The intent of these new adventure publications is to jump-start your own home group with a very easy approach to new play.
A total of three new adventure modules will be produced, each of them expected to be from 12-20 pages in print. (These three are in addition to “The Android Underlords,” the special adventure released at Gary Con 2014 when this Kickstarter was announced.) All will be written using the original 1976 rules. One of the new adventures is a set of drop-in encounters, written by METAMORPHOSIS ALPHA creator James M. Ward, with his unique perspective on the game’s original vision and evolution. A second adventure is written by Michael Curtis, known for his work on Dungeon Crawl Classics adventure modules, as well as Stonehell Dungeon and The Dungeon Alphabet. A third adventure is written by Jobe Bittman, whose adventure The One Who Watches From Below won the Goodman Games Mystery Map Adventure Design Competition in 2012.

If this kickstarter goes through here's what the final result will be! It's a very sexy looking package. A complete gaming system in one whole ultimate edition of Metamorphosis Alpha! 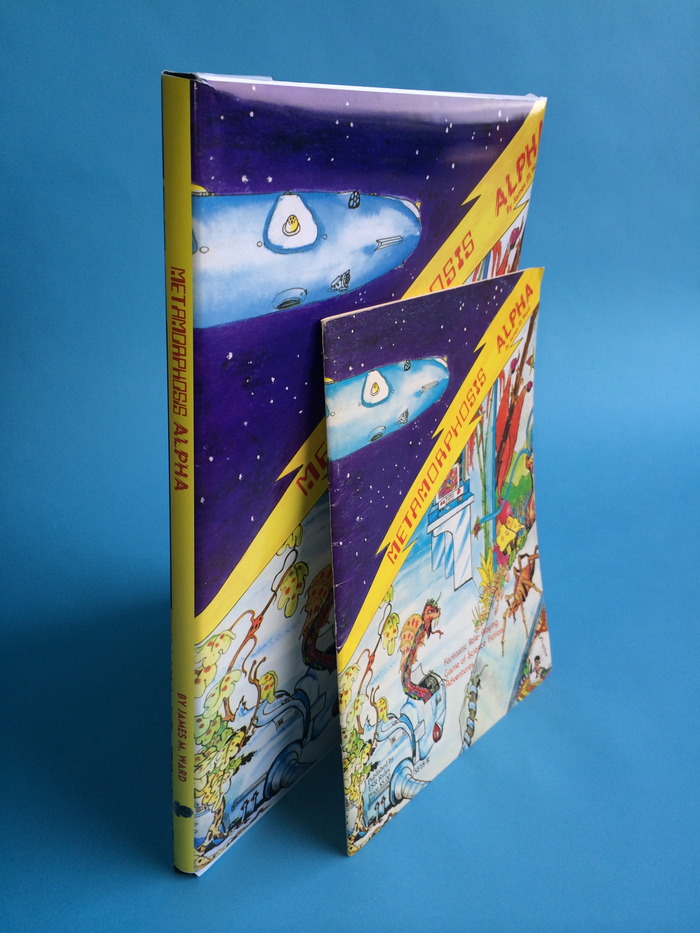