The Mists Creep In - 'Of Gods & Monsters', James Ward's Tainted Lands, and The Role Of The Divine

" Mythic epics are the driving force behind fantasy role playing games! Castles & Crusades is no exception. Here for the first time C&C branches out into the ether and brings you OF Gods & Monsters a book we guarantee you’ll want and use. Written by James M. Ward this book stands along side the Monsters & Treasure as a tremendous resource for adventure and fun."

"James M. Ward returns to a subject he knows very well and delivering a plethora of information on hosts of gods, godlings, heroes and the magic that drives them. In Of Gods & Monsters Mr. Ward explores over 16 pantheons including Norse, Greek, Roman, American Indian, Aihrdian, Inzaen, demi-human pantheons and more. Beyond a simple recitation of deities, Of Gods & Monsters present playable incarnations of the gods in the guise of their own avatars. The deft and experienced hand of Mr. Ward explores spells, magic items, rituals and more." 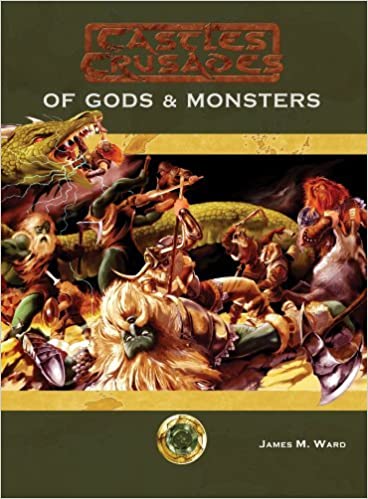 "Castle Keepers need not struggle with characters encountering all powerful deities, but rather they can use the avatars to spice up and drive adventures of the mythic and the divine. These avatars and designed to be playable version of the gods, but not the gods themselves. Complimented with mythic monsters and holy items Of Gods & Monsters is a must have for any serious CK."

Though it trods the same material as the classic Advanced Dungeons & Dragons Dieties & Demigods By Kuntz & Ward. 'Of Gods & Monsters' is a completely different animal, giving the Castles & Crusades rpg some divine teeth. With Halloween around the corner the PC's will need it.  Halloween & horror games strike a tricky balance between the practical game campaign & the weird to be successful. The gods don't really have say in the invasion of the Tainted Lands per say into a campaign world. This is a full on invasion! A war between the living & forgein undead. There are few niceties among these divinities because the mists mean war.  As we covered yesterday Halloween games can be tricky affairs.

'Of Gods & Monsters'  has the feel of original Dungeons & Dragons Gods, Demigods, & Heroes only superficially. And its this superficial quality that allows the DM to exploit for adventure design. This is  especially true with the American Indian mythologies that allow the Tainted Lands to be brought over into a Castles & Crusades or Amazing Adventures campaign. Because they don't!  According to the wonderful book  ' Belief and Worship in Native North America' by ÅKE HULTKRANTZ there is little interaction of securing the dead as guardians or the like. The boundry between the world of the living & the dead shall not be violated.  The Tainted Lands however have other ideas however. Coyate & Raven one of the Indigious People's important divinities might be the first to notice such an incursion into the horizon of our reality. 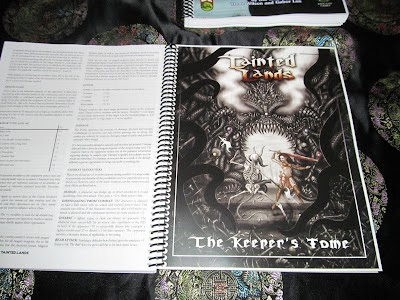 Amazing Adventures rpg's 'Child of the Deeper Dark' has  a Lovecraftian monster vibe ringing with  the  feel of the Tainted Lands.  The 'Children of the Deeper Dark' might well be representations of the Tainted Lands & act as harbingers of the coming darkness. These 'Children of the Deeper Dark' appear in an area such as a village or town only to be followed by hordes of undead. The gods send in parties of adventurers & heroes to help where & when they can. But there is only so much such divinities can do when the undead coming calling. Heroes are needed!
And this where the gods can lend a back hand to the world. They can open gatewatys to worlds like Greyhawk & Blackmoor or other such settings. The gods can also possibly begin imbuing modern humans with their power. This is option that at the moment we're pondering.