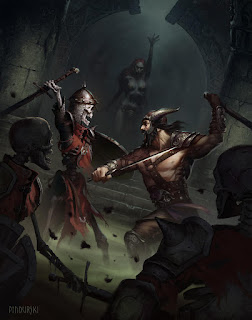 "I was looking for a way to make my D&D combat fast, realistic, and exciting.  I put forth a few ideas, but my friend Rob Couture had the idea of increasing the critical-hit range every round.  I took his idea and ran with it.

Included in this PDF is the cover image, Rob Couture's foreword, an explanation of the Crimson Escalation mechanic, a visual aid "tracker" so you always know what crits, some cool artwork and layout, my Ten Commandments of Immersion, and the credits." 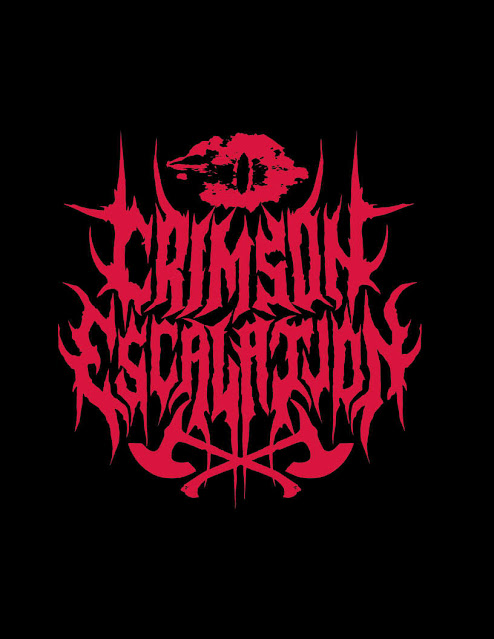 "If you want to start using Crimson Escalation on your own without purchasing this PDF, you have my blessing.  I know it will improve your battles and overall enjoyment of whatever D20-based fantasy roleplaying game you want to use."

Crimson Escalation by Venger Satanis is simply a very simple, easy to use, and reliable alternative combat simulator in hit point based games. Will this system be useful for Call of Cthulhu or even story teller style games?! Yes it will! Crimson Escalation only clocks in at nine pages but its actually a very useful nine pages at that. What Crimson Escalation actually is, is a series of simple & easy to use combat systems. what is it? Well in a nutshell according to CE kickstarter; "I received a lot of comments.  Rob Couture suggested increasing the critical-hit range by one every round of combat (Rob has graciously agreed to write the foreword for Crimson Escalation).

Yes, that's basically the entire gist!  On the 1st round of combat, critical hits are on a "natural 20".  On the 2nd round, crits are 19 and 20.  3rd round, crits are 18-20, and so on..." But this is Venger Satanis so nothing is ever at it seems or so one would think right?! Wrong! Crimson Escalation is actually quite nuanced in its play style. The combat system is simply reliable and very brutal with both sides going into combat but one one surviving that being the idea here.  'Ten Commandments of Immersion' hits the high points & does so with little difficulty. These guidelines are common sense & very handy!
Wait, isn't 'Crimson Escalation' simply someone house rules for combat?! Well yes & a big resounding, no! This is an well put together product & it shows. There has been some actual play testing here and it shows through. Is Crimson Escalation actually useful?! In my estimation? Yes if the DM & players actually follow through on using the Crimson Escalation system then its a good & easy combat system to use. Where would the Crimson Escalation system actually be useful to in an rpg system?! Personally I believe that CE would work very well within a Sword & Sorcery rpg adventure setting in spades. Do I recommend the CE system?! In a word yes!
'Crimson Escalation' By Venger As'Nas Satanis, & Rob Couture For Your Old School Game Campaigns Is Available Right Here For Purchase.