"Hot Zone – that’s the crew’s name for LS809, a burning hell-hole orbiting Gliese 9028. It’s where they need to be, the location of a missing hyperspace probe. Acting strangely, whilst plotting new hyperspace co-ordinates, the probe has crashed-landed on the Hot Zone.

Now the ICO want it back - quickly … and quietly.

But the planet won’t let them take the prize so easily. This is a truly ‘hostile’ world with some terrifying and dangerous obstacles to overcome. And … something else… wants the probe." 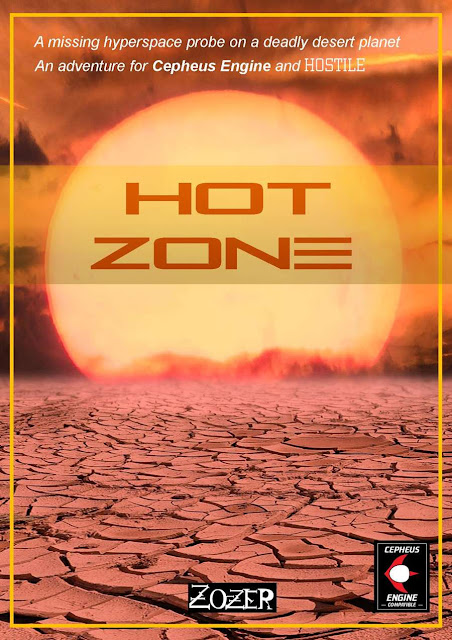 Hotzone is one of those unassuming little titles that's bypassed me on the Drivethrurpg shelf now like a solid 80's or 90's Sci fi VHS tape whose cover artwork is less then stellar. But whose contents shine far more then the exterior let's on. The basics first this adventure is for Zozer Games Hostile setting. But the more I learn about 2d6 Cepheus Engine driven rpg's this adventure could be easily adapted into other sci fi engines.
Paul Elliot is a man who loves his details as is evident by this adventure & even the DM set up introduction shows this; "This is a recovery mission. The player characters (PCs) are the crew of an ICO (Interstellar Commerce Organization) ship called the USCS Outlander that has been given the mission to recover a crashed hyperspace probe. These large unmanned probes map out new hyperspace routes to the stars, and this one has gone awry (on purpose!) and crashed onto uninhabited planet LS809, a hot desert world that orbits Gliese 9028 – a red dwarf star." Already we've got the set up & run through for this mission an its gonna be a really nasty one. Paul Elliot's writing here is spot on walking the line from solid Hostile straight into 'B' movie Friday night rental mode. This is the perfect combo for Hostile on the whole and Hotzone proves this once again. 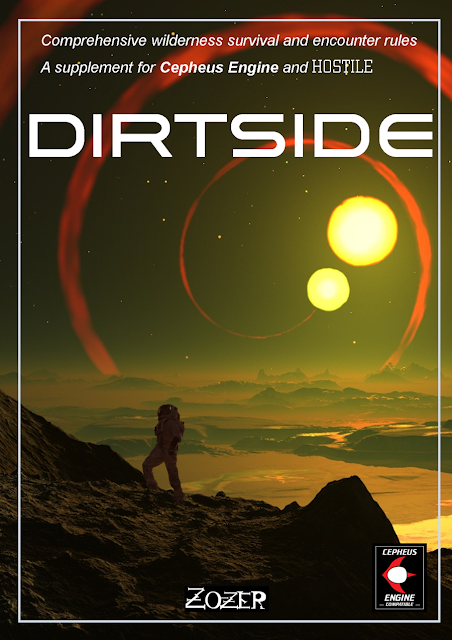 Hotzone clocks in at twenty seven pages of high octane survival fun! This book brings to mind another Zozer games title and that's Dirtside! Dirtside isn't a title you need to run Hotzone at all! But Hotzone takes full advantage of the design & writing lessons that Mr.Elliot learned on Dirtside. In other words, the writing & design is tight in Hotzone.
This is a fun but deadly little adventure where the menace is three fold the planet, the situation, and the other. The other here is just waiting for PC's to screw up so bring extra characters to this one. But is Hotzone worth the download?! In a word yes for a multiplicity of reasons. Hotzone is going to provide more then a few sessions of play. The world planet LS809, a hot desert world that orbits Gliese 9028 – a red dwarf star has some decent potential for extended play across a spectrum of Hostile adventures if the DM uses his head. Mining, exploration, and more are mixed into the adventure if the player's PC's survive. This isn't one off kill zone adventure but a highly dangerous mission on an alien planet. And its a solidly done adventure up too the quality that Zozer Games produces.