If you've been following last blog entry here  Then you know about the fact that our heroes have stumbled upon a world where the remains of a post apocalyptic  Florida hold  the Minrothad Guilds  Bruce Nesmith's X7 The War Rafts of Kron. But what you night not know is the fact that the seas surrounding the X7 are actually the seas of Dread. That's right those Seas of Dread from X1 Isle of Dread. Those seas who have been covered in Vault of Pandius's Return to the Seas of Dread issue free here. 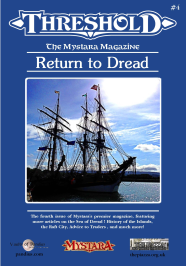 But what about the surrounding half sunken Floridian coastline? Surely there couldn't be a possible classic era TSR adventure that could cover the stinging insect ridden coasline? X6 Quadmire by Merle M. Rasmussen  fits the bill quite nicely. X6 Quadmire is the sixth adventure in the Expert series for Basic D&D. It was published in 1984, probably toward the start of the year since it was the first of three "X" adventures that year. 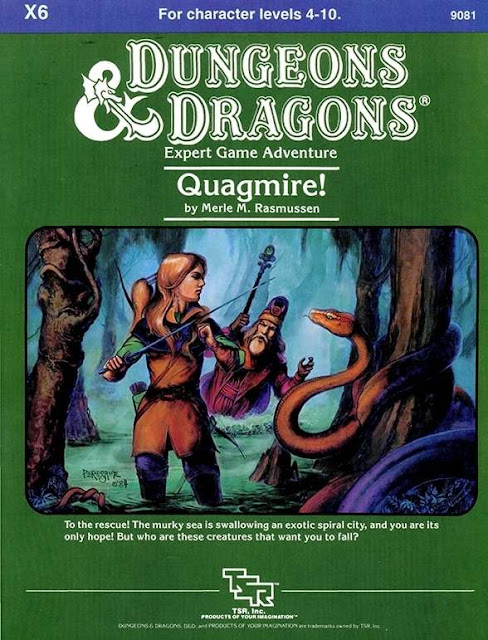 You've got rising sea levels rising  to cause PC's headaches. And brand new monsters to help explain some of the weirdness Earth is experiencng. What makes Quagmire perfcct for a post apocalpytic Florida? Well let's look at the quick history from the Quagmire drivethrurpg history; "In detailing the Wild Lands, "Quagmire!" introduces the Serpent Peninsula, Thanegia Island, and the cities of Slagovich, Quagmire, and Thanopolis. Overall, the Wild Lands are pretty empty, without much of a population, which was a common depiction of the Known World in the early "Cook" era for the setting (1981-86). This Serpent Peninsula would become more populated in future revisions of the setting."  So the  Serpent Peninsula gets a facelift over to post apocalyptic Florida & the lost world of Slagovich, Quagmire, and Thanopolis become the lost world of a post apocalytic Florida with strange peoples, miles of trackless wilderness, & an adventure  plot waiting for a group of heroes. Another resource to consider using here is Skirmisher Publishing's Creatures of the Tropical Wastes. A perfect add on for this campaign of monsters, mutants, & madmen. 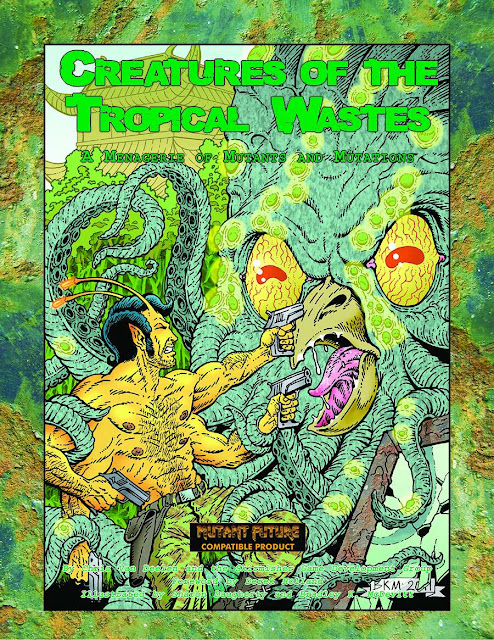 These half sunken wastelands are very dangerous & even in such classic era adventures the waters surrounding the swamplike wastes are going to be the prowling ground for pirates aplenty. This is only the start of this.