"A terrible menace from the sea is threatening villages all along the coast. Whole shoreline communities have been disappearing without a trace.The remaining area inhabitants have banded together and sent for a group of experienced heroes to help. They want to know what could be causing these horrible events, and more importantly, what can be done to put a stop to them. Is it some new terrifying monster from the depths? Or is there something more sinister at work?

The adventurers will travel deep beneath the waves!"

So this holiday weekend I had zero prep work & DM Steve rang me,' Do you wanna run a bit of Amazing Adventures?!!. My wife wanted me out of the house. With little written down I pulled out something that I'd been working on & it was notes on running GW5 Rapture of the Deep. The free Gamma World adventure 'Rapture of the Deep'  right over here at Wayne's Books. 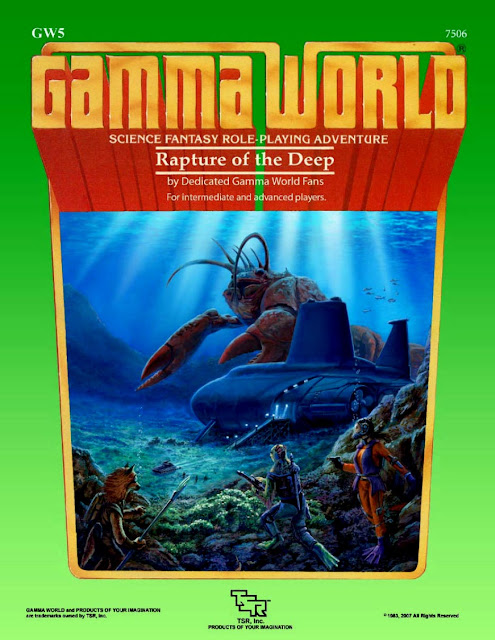 So today I've just gotten back from running a play session of Troll Lords Amazing Adventures sorta. The Player's PC's journeyed through the brass ring and found themselves in Florida or what was left of it! What the PC's found themselves in the middle of was sea side village under attack by mutant fish men! The party of nine players pulled out the stops and it was epic! They were able to beat back the attackers but only barely. The PC's had ported in from a Pulp oriented Earth year 1989 & speaking to the villagers learned the following; "For the last few months, a series of attacks have been made on coastal towns and villages. Whole communities have been disappearing without a trace. All that was found afterward were deserted buildings and the occasional dead body. The odd thing about the bodies that were found is that they were located in hard to reach or concealed areas as if they were hiding from something. The dead had no apparent wounds and their faces were twisted in terrible grimaces"

And on smoke break one of the players says, 'Oh Eric's true to form he's using Gamma World instead of the Starship Warden setting'. When the cleric Father Patrick Trusuno asked what happened to cause the apocalypse on this world. The wise man of the village recalled the starship Warden  falling from the sky when he was achild. This goes back to my blog post S3 'Expediation to The Barrier Peaks' by Gary Gygax With The Castles & Crusades Rpg Aligned With The Star Ship Warden Rpg book here. 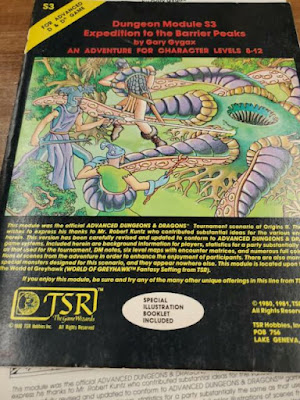 Here everything changed when the Warden fell from the sky in South America. Corporations got their hands on the technological artifacts from the wreckage of the  Warden science collection vessel. And technology evolved rapidly! Antigravity, wireless power transmission, viable hand held energy weapons, etc. from the Warden's wreck. All this  accelerated the global tensions and then entropic weapon war happened! There are cryptic alliances but not quite as well entrenched as in classic Gamma World setting. Its only been a hundred years since the appearance of the science vessel.  The PC's encountered a rust monster near the beach and the tree line which caused them all kinds of pause.
So we're using a combination of Starship Warden & the Starsiege rules combined with classic Amazing Adventures for this. But I'm just starting to dig the knife in. 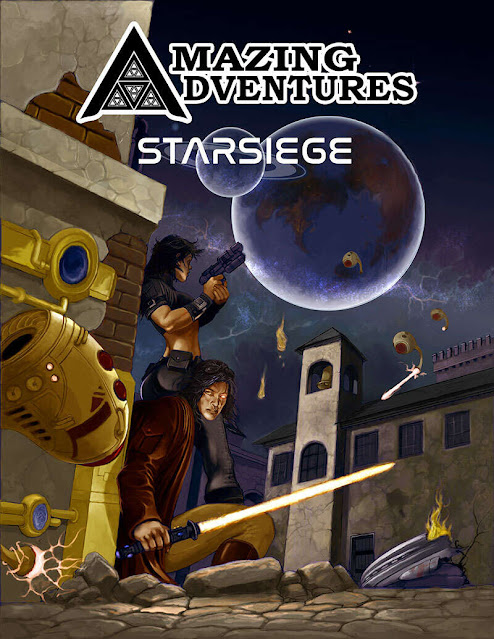 Email ThisBlogThis!Share to TwitterShare to FacebookShare to Pinterest
Labels: 'S3 Expedition to the Barrier Peaks', GW5 Rapture Of The Deep, Session Report