Appendix N - The Remeberance of Robert E. Howard & Set the Elder God of Kull of Atlantis

So a couple of days ago this piece of Robert E. Howard inspired artwork.. Now its been many years since I've been down to Cross Plains Texas. And over the last couple of days Robert E.Howard's life & literature has played on my mind. 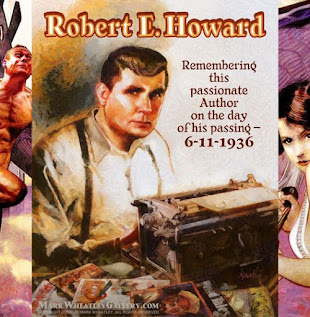 Now Robert E. Howard's Conan is the usually the literatery character that folks bring up. Conan is the solid barbarian. But for me its gotta be King Kull & the Thuria stories.
These stories are so important to the Cthulhu mythos & even the Marvel universe they never get mentioned in OSR or old school circles according to the HP Lovecraft wiki; "Thuria is a fictional supercontinent created by Robert E. Howard. It first appeared in "The Shadow Kingdom" (Weird Tales in August, 1929), the first of his King Kull stories and, according to Lin Carter, both one of the first three stories contributing to the Cthulhu Mythos and written by others than H.P. Lovecraft"

Thuria is more then the Kull though it marks the real meat & patatoes of the appearance of the Cthulhu mythos in Robert E. Howard's Thuria tales. King Kull himself was far more successful then Conan but who is he?! According to the wiki entry on Kull of Atlantis; "Kull of Atlantis or Kull the Conqueror is a fictional character created by writer Robert E. Howard.  Kull was born in pre-cataclysmic Atlantis c. 100,000 BC, depicted as inhabited at the time by barbarian tribes. East of Atlantis lay the ancient continent of Thuria, of which the northwest portion is divided among several civilized kingdoms. The most powerful among these was Valusia; others included Commoria, Grondar, Kamelia, Thule, and Verulia." 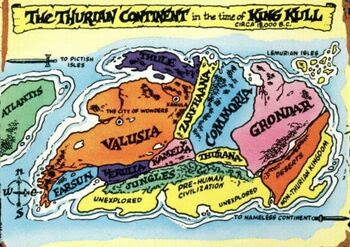 Kull of Atlantis  first published appearance was "The Shadow Kingdom" by Robert E. Howard  in Weird Tales (August, 1929). In later Kull of Atlantis stories one of the most dangerous if not the most dangerous foes are the serpent people. According to the H.P. Lovecraft wiki on the creation of the serpent people; "The serpent people were invented separately, but almost simultaneously by Robert E. Howard and Clark Ashton Smith; H. P. Lovecraft, Lin Carter, and John R. Fultz have all expanded the information. Richard L. Tierney added the goat-spawn and shoggoths in "The Temple of The Abomination" by Howard and Tierney."
For my money the Bronze age Marvel version of serpent people are the depiction that comes to mind from the pages of Kull the Conqueror series. 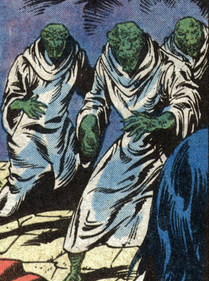 But the iconic cover of  issue #1 in 1971 still resonates with me. The tagline still rings in my mind;
"A King Comes Riding!" – Before there was Conan - before many-towered Atlantis sank - there was King Kull! Robert E. Howard's first great barbarian hero - never before in comic-book form! "
Kull was a thinking man's king & able to deal with many of his threats with common sense as well as violence. But there are vast differences between Robert E. Howard's Kull of Atlantis & Marvel's Kull the Conqueror of the 616 universe. Seriouly go read up on that here. 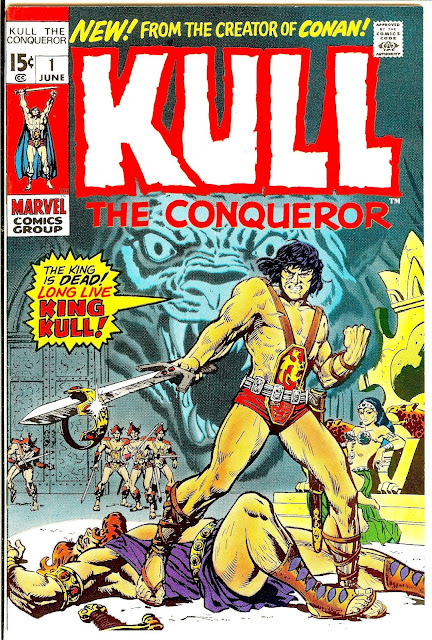 But it was Valusia the empire of the serpent people & their gods Set as well as Yig. That's right Yig is separate from the great serpent set. Valusia is the land of serpents and the great empire of the serpentmen. Many of the changes of the serpent men came from the pen of Lin Carter; "
In the Mythos works of Lin Carter related to Hyperborea, Shuggon is the ancient continent of the Mesozoic serpent people destroyed in a cataclysm c.65 million B.C.E. which caused the surviving serpent people to migrate to Elder Valusia and aided the extinction of the dinosaurs. Shuggon is named in the Necronomicon but goes unnamed in most other texts. May be the same as Altuas or Altuan." After all its not like Robert E. Howard wrote about Set setting up parameters of his serpent god except in the most general terms in Kull, Conan, El Borak, & throughout his works right?!
Well, yes & no. Yes he wrote about the great serpent in the one place that all of his readers except his die hard fans forget to look in his poetry. Robert E. Howard was as prolific a poet as H.P. Lovecraft & Clark Ashton Smith. So in addition to the man serpents & other wonderful serpentine creations Robert E. Howard  also wrote the poem' Serpent' which is public domain;
"I am the symbol of Creation and DestructionI am the beginning and the end.With my tail in my mouthI am the Circle of Eternity.Wisdom is in my eyesAnd the dusk of wisdom lurks amid my coils.My track circles the worldAnd I loop my coils around the Universe.My head waves among the starsAnd the nations fall prostrate before me.Coiled, head upright, I am the spirit of the sea.The world-shaking dinosaur was my henchmanAnd the flying dragons were my footmen.The ancients knew me.They reared shrines and altarsAnd I taught them dim, dusky wisdom.I coiled in the ruins of Troy and BabylonAnd on the forgotten streets of Nineveh.The Norse called me Midgaard and built their galleysLike a sea-serpent.The Egyptians and the Indians called me YsisAnd the Phoenecians Baal.I am the sea that girdles the world.I am the first and I shall be the last.I am the Serpent of the Ages."
Serpentby Robert Ervin Howard 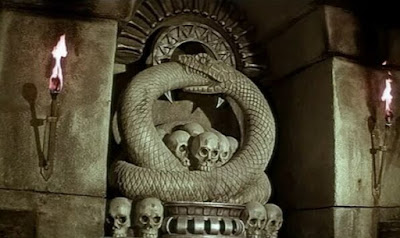 Conan film 1982
There will be more Robert E. Howard blog posts coming up this week!
Posted by Needles at 5:16 PM