Rock Critters are a scavenger like Kaiju have been seen at the outer edges of the solar system & near the ruins of some of the god forsaken ancient outpost worlds  of the Anunnaki. They have also been found in Inner Earth. These scavengers always appear where there have been the mining works of the Anunnaki. Rock Critters are fast moving, deadly scavengers just as likely to eat a human as the debris left behind by slave races of  the Anunnaki. They have  deadly bile like acid that can eat through most manmade materials easily.
These deadly little bastard Kaiju rely on camouflage, stealth, & their unnatural biological shells that are made from naturally secreted resign, internally created metal, & the Kauju's weird biological make up. The speculation is that they were biologically created by the Anunnaki to serve the job of organic ore separators.. These fast moving scavengers feed on anything they can stuff into their ore like bladed mouth parts. Rock Critters never appear alone & always work in swarm colonies of 2d6 monsters. These colonies have become a hassle on the post apocalyptic Earth as these monsters have migrated with the coming of the Anunnaki. Big Ass Reptiles are often found in areas with large infestations of Rock Critters where the feeding is good. 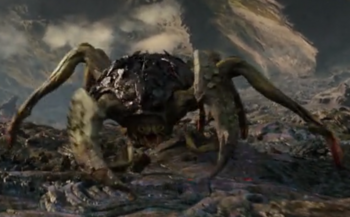 Rock Critters are often found now scavenging off the mine workings of the Mi Go. The alien fungi often exterminate the Rock Critters with extreme prejudice as the monsters have been know to swarm some Mi Go asteroid outposts.