The Foetodon ("cruel stinking tooth") is a large, bulky, lizard/crocodilian-like notosuchian from the jungles of Skull Island & the Inner Earth. These jungle predators have migrated into the post apocalyptic Earth's wastelands. Is this by design or function? The question remains open for scientists & others. The Foetodon feeds on the remains of humans, dinosaurs, & even Kaiju. They are extremely resistant to toxins, mutagenetic's and even some low level radiations. But they are an extremely dangerous scavenger & omnivorous species of evolved lizard/crocodilian-like notosuchian. 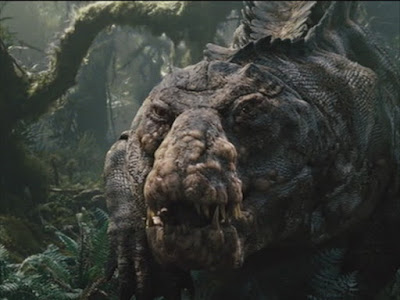 Foetodon will usually scrape out a hollow near a game trail or will burrow into mounds of litter, lying quietly for a prey item to appear. And then when the prey comes near powerful jaws take man, beast, or other. the Animal is extremely well versed in taking prey or to scavenge. They are highly adaptable being able to swim, burrow, & even jump to a certain extent. All of this is done in the search of prey. 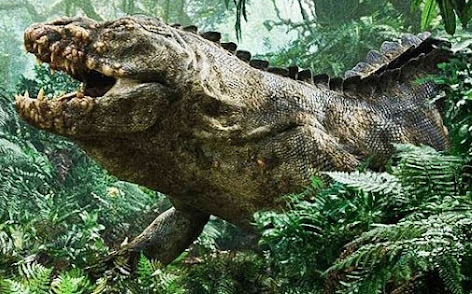 The Foetodon is often encountered around the biological labs of Mi Go or around Mi Go mining sites where they are used to dispose of biological accident, corpses, & other alien biological debris. The Mi Go use a wide variety of control tactics up too low level stun devices or control cybernetics on the Foetodon species.