Today's blog post picks straight up from yesterday's & dive deeper into the mystery of the Realms.

The other day we were on a sewing machine repair call driving over a hundred miles round trip. The winding road does strange things to one & the thoughts soon turned back on themselves to the season three episode of the Dungeons & Dragons cartoon. We got back & I started thumbing through my campaign notes for Godbound. Wait what?! Gobound but what does that have anything to do with things. Let's get back into "The Time Lost" Sept 21, 1985 in which 'Venger plans to use a time portal to have Germany win World War II-and prevent the kids from ever being born! Will he succeeded?' 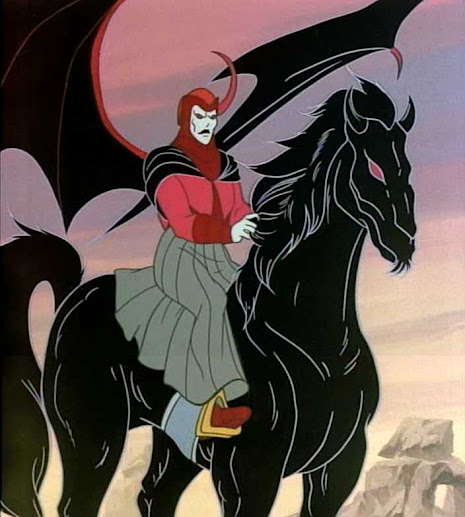 Because that's Venger's job folks. Let's look very quickly at his description from the Dungeons & Dragons cartoon wiki; "The main force of Evil and the estranged son of Dungeon Master; there was good in him once however he has become a force for evil. He has been an evil wizard for at least 1,000 years {"The Night of no tomorrow"; "The Treasure of Tardos"; "The Girl who dreamed tomorrow"}. To conquer the Realm he must 1} destroy Dungeon Master and the kids; 2} acquire the kids totems 3} Use the kids weapons to conquer Tiamat and the Realm . Venger hates the kids especially -not just because they posses the totems he needs to conquer Tiamat and the Realm but also because they are "Pure of Heart". {"The dragons graveyard"}. Venger's master whom even he fears is only referred as "He whose Name cannot be spoken" {"Dungeon at the Heart of Dawn"}. The Only organic substance that Venger fears are red heartstones {"The Traitor"}. Venger has lost magical duels to Tiamat {"Hall of Bones"}; Dungeon Master {"Eye of the Beholder"; "In search of the Dungeon Master"}; Eric {"Day of the Dungeon Master"}; Presto {"The Dragons Graveyard"}; Korlock {"Odyssey of the Twelfth Talisman"}; Karena & Shelia{"Citadel of Shadow"}."

Basically look past the whole cloth of the Realms & let's look at what Venger does. Time in & time out Venger is constantly harassing, pestering, & harrying the kids just as he done countless times to Dungeon Master's other pupils. Basically Venger is playing the Hebrew Bible's Satan role; "The original Hebrew term śāṭān (Hebrew: שָּׂטָן‎) is a generic noun meaning "accuser" or "adversary",[7][8] which is used throughout the Hebrew Bible to refer to ordinary human adversaries,[9][8] as well as a specific supernatural entity.[9][8] The word is derived from a verb meaning primarily "to obstruct, oppose".[10] When it is used without the definite article (simply satan), the word can refer to any accuser,[9] but when it is used with the definite article (ha-satan), it usually refers specifically to the heavenly accuser: the satan" And this is exactly the role he plays because he really will kill the kids if he get's the chance. 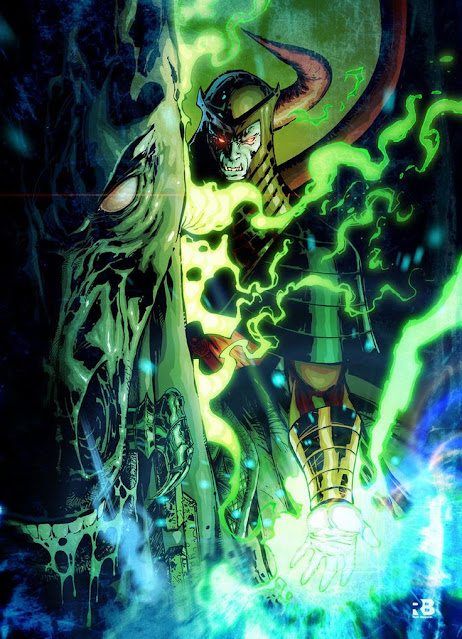 Venger by ryanbnjmn.deviantart.com on @DeviantArt ..
Artwork used without permission.

The Chronos Crystal from  'The Time Lost'  reveals exactly what the Realm is. The Realm isn't Greyhawk nor the Forgotten Realms nor any other campaign world. Why?! Because 'The Realm' is stitched together from a wide variety of time periods, dimensions, & places. All of this is stitched on to a generic D&D fantasy world. But monsters, creatures, etc. are deadly serious here. 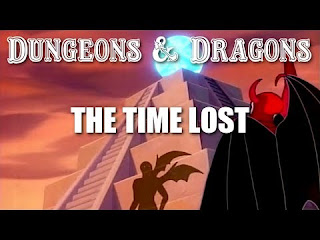 In Godbound terms 'The Realm' is a former Paradise that has been cut off from the rest of reality. But why train & keep training adventurers through a 'grinding gear' of the engine of the Realm & it's adventuring environs?! Because the Dungeon Master is fulfilling his true purpose with the addition of his son taking on the family business from other end of things.  "He whose Name cannot be spoken" is one of the nameless Outer Gods or reality shattering god things trapped 'beyond the threshold of reality'. Venger receives his power from 'He Whose Name Cannot Be Spoken' who may be the nameless Abyssial  king  of  the Nabassu. Remember when I said that Venger is loath to use the Chronos crystal?! That attracts the attention of the god things. Because the crystal is calling on their time space continuum wrecking occult powers. 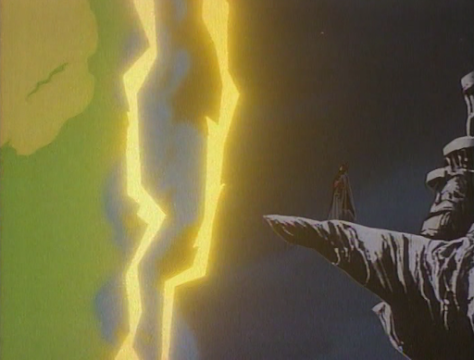 Venger isn't simply a demon lord or wizard. He was at one time. But Venger is actually an immortal ala Mystara or BCEMI D&D rules. 'He Whose Name Cannot Be Spoken' is the entity that sponsored him for immortality. But these things can't abide even a bit of order so it had to be locked away. 'He Whose Name Cannot Be Spoken' is one of the saner of his Lovecraftian ilk.
But its actually Eric the clavier whose life is on line. Eric is the most powerful of the party of the D&D cartoon kids. He's being groomed to take the Dungeon Master's place in the Realm. Eric is being groomed to go up to immortal level & take over as the new Dungeon Master. Why?! Because the threat of the 'Realms' isn't over. Its only beginning. 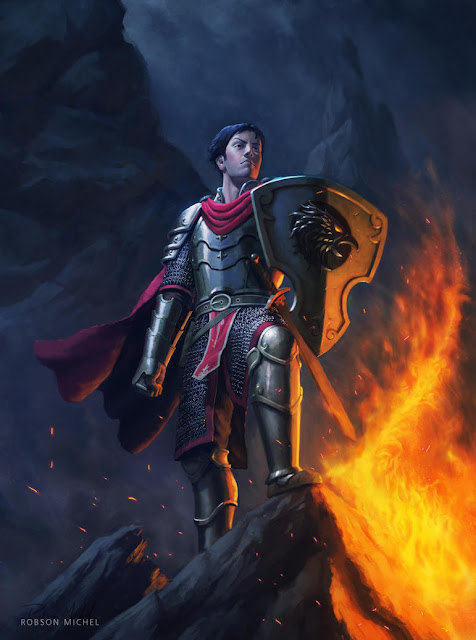 Eric, the Cavalier by RoBs0n on DeviantArt artwork used without permission.