'The tentacles from planet X' come from 'The Between Place' also known as the Mist. Within this plane is a very alien macro ecology filled with alien Lovecraftian life forms.  'The tentacles from planet X' are such a life form able to tear off chunks of flesh from their prey easily. But these life forms are actually complex omnivores able to digest anything that comes into the hundreds of mouths that line their tentacles. These things are aggressive & highly dangerous  predators within their own right. 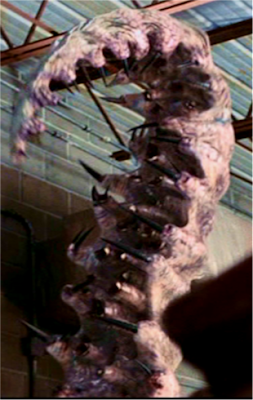 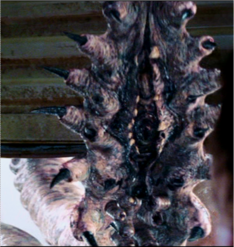 'The tentacles from planet X' take full advantage of such expansions to increase the area for their own species to expand its ever feasting reach! The monsters have been found increasingly upon a wide variety of planets, planes Prime, & other dimensional locations.

'The Tentacles from planet X'
21/44, Move 6m (swim or slither), Armor 4, Beak (melee 3D damage) and 8x arms (melee 2D damage each). Combat-3, Physical-3, Survival-1. Gigantism,
Evaporate - The Tentacle if damaged or severed from the main trunk of tentacles will dissolve into a foul smelling liquid in 1d6 seconds. There are some occult theories which state that resulting left over alien sludge can be collected to be used in a 'summon horror ritual' used to call the tentacles