"A Myriad of Magic Items is a collection of new and unusual magic items designed for use with Labyrinth Lord, but readily useable with any Old School RPG.

A Myriad of Magic Items contains a total of 80 new magic items." 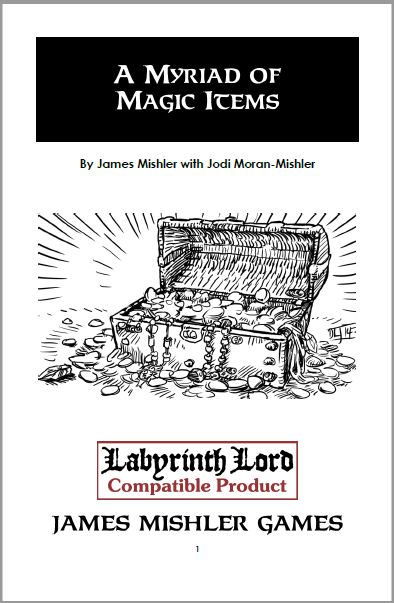 The OSR twist up is the fact that in 'A Myriad of Magic Items'  each magic item is for a specific D&D style class. This is that we've seen in other old school game supplements before & goes all of the way back to David A. Hargrave's Arduin rpg supplements for original Dungeons & Dragons. Here the Mishler's take A Myriad of Magic Items to its logical conclusion. Each magic item hooks into the character class & its done very well. This idea is also done in many of Castles & Crusades rpg supplements especially  Troll Lord Games Castles & Crusades Mystical Companions for C&C. Where the occult familiar matches the capacity of its master's class's hand & specialty. 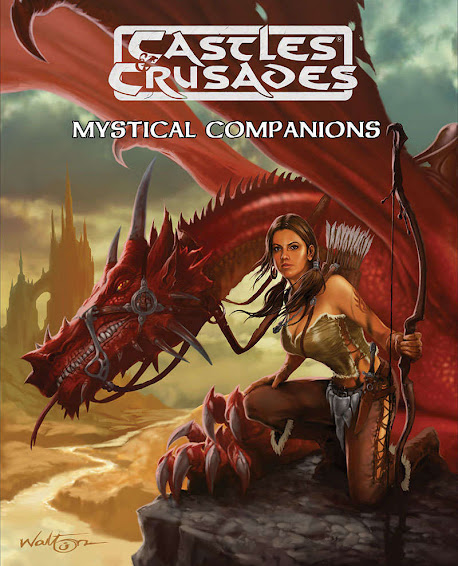 'A Myriad of Magic Items'  takes this idea to its logical conclusion with the lost & elusive treasures lost to their original owners. Now these items wait in treasure chests & other monster haunted ruins across your campaign world. Take  for example the Shifter's cloak a Barbarian themed item ;"SHIFTER’S CLOAK: A shifter’s cloak is an enchanted cloak that enables a barbarian, berserker, or ranger, along with all their equipment, to transform into animal form. While in the animal form the wearer retains their intelligence and personality and possesses their normal Hit Dice and Hit Points, but have the animals’ Armor Class, attacks as a Monster of their Hit Dice (if better than their normal attacks), and attacks using the animal’s natural attack forms. The wearer can change back and forth as often as desired, remaining in the animal form as long as desired. 1 in 6 of these items allows the wearer to speak while in animal form. The types of animals vary widely, depending on the type of animals valued by a barbarian culture, and might include bears, boars, crows, eagles, falcons, foxes, horses, hyenas, lions, otters, panthers, salmon, seals, sharks, snakes, swans, tigers, wolverines, and/or wolves, among others (though a cloak only allows shifting into one type). 1 in 12 of these items is cursed, such that the third time transforming into the animal form, the wearer remains stuck in that form, losing their own personality as per a polymorph other spell, until the application of a remove curse spell. Anyone other than a barbarian, berserker, or ranger who dons a shifter’s cloak is cursed as above."
The Shifter's Cloak offers all kinds of possible adventures hooks for the enterprising DM especially for one whose got a Sword & Sorcery themed campaign setting in play. This is a sample of the quality that the Mishler's continue to bring to the table.  A Myriad of Magic Items brings this & many other treasures to the table in thirty two pages of OSR goodness. They cover many of the major classes in Labyrinth Lord including:
Assassins
Barbarians (and Berserkers)
Bards
Clerics
Druids
Dwarves
Elves
Fighters
Gnomes
Halflings
Illusionists
Magic-users
Monks
Necromancers
Paladins
Rangers
Runemasters
Sorcerers
Thieves
Many of these treasures found in  'A Myriad of Magic Items'  could be in point fact be used as the central adventure focus & added as a campaign goal. This would work as the treasure being a familial focus for an old school campaign for royalty or as the deciding force behind a crown or adventure goal. Is
'A Myriad of Magic Items'  worth the download?! Oh most certainly given the following the flexibility of the treasures presented, the originality of the Mishler's vision, & their application within old school & OSR games.


You can grab  'A Myriad of Magic Items'  Right Here.