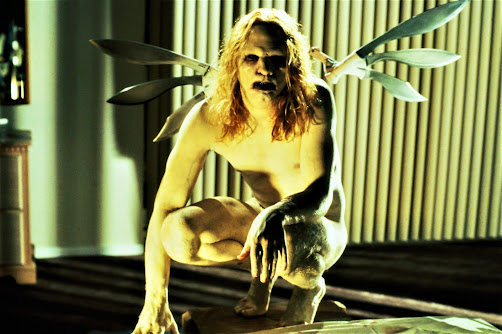 Demon from the Clive Barker Film Lord of Illusions 1995

“[Horror fiction] shows us that the control we believe we have is purely illusory, and that every moment we teeter on chaos and oblivion.”
― Clive Barker

The Angel of Knives

Stats don't do this lost deamonic soul of lost damnation justice. Once it was a deamonic weapon of philosophy aimed at the heart of an uncaring godling. The thing survived the suicide of its intended target & now it wanders the universe & shores of reality. Tossed about like a rusted blade of a deamonic soul with no heart to visit it's malice upon. Yet it moves from place to place possessing one victim after another carving its way across existences & realities leaving the victims torn & cut with its occult power. Only qualified exorcists, clerics, paladins, etc. have any chance of dealing with this entity.
Anyone possessed by the angel of knives gain an AC of 5, their Hit Points increase by 10 ,  they can speak, read, and understand any language, gain a +2 to all saving throws, and may cast the following spells: Darkness three times  per day, protection from good 2 per day, magic missile every other round, & teleport without error once a day. It may heat metal as per the spell three times a day. The angel loves to use this ability to cause pain & suffering to its victim's family or loved ones. It is repelled by the signs & symbols of the 'old gods'
The angel moves from one victim to another causing intense suffering & mayhem especially to the families of royalty & power. The angel is a deamonic weapon  without purpose except to exist to cause evil & pain. Yet, it feels deeply of these things weeping for the knowledge that it will never again cause the death of another divinity. So the thing lashes out at anyone & anything causing as much havoc as it can through clever plots, deceptions, & utter nastiness. Because the angel has been around for thousands upon thousands of years sorcerers & wizards love to consult it for its occult knowledge & gravitas of supernatural power.