" At that insult Leir gave the command. The carnyxes blew, and the two armies fell upon each other. Then there was hacking and smiting; heads were broken and limbs hewn off, there was neighing and trampling of horses, and the bitter cries of men meeting violent death." 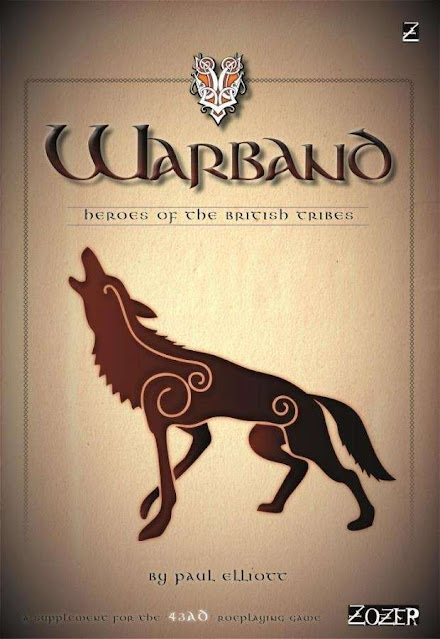 And so begins the seventy three pages of Warband rpg an add on book for Zozer Game's Paul Elliot whose work on Roman Britain's 43 AD rpg speaks for itself. This book covers everything about Britain's Celtics & its not pretty. This is a brutal warrior & druid affair of a game with systems covering the other side of the story;" The Roman invasion of Britain as described in 43AD is of course only one-half of the story. It is quite possible to play the game from the perspective of the tribes using all of the resources found in the main rulebook. What is needed is a revised character creation system enabling players to build tribal heroes. This book provides that."  And this isn't history its something a bit more weird & wooly but its still history from a different perspective. The occupied  perspective but it does it in terrifying  & mature tones with all of the gore intact. And there's plenty of Roman & Britain blood splatter to go along in its 2d6 world of the Roman Empire.
There is plenty of development & while the Cepheus Quantum & other engines go smaller. This book revels in its history explaining clan, family status, honor, & much more. This is an exotic  world on the edge that we living in 2021 can scarily imagine;" Information of tribal life is not duplicated from 43AD, instead other resources are included here. You will find a detailed history of the Roman invasion, allowing the Game Master to select a particular campaign or era in which to set the struggle of the tribal resistance. Also included is a mass battle system. With a few rolls of the dice the great battles of history, or of your own games, battles involving tens of thousands of warriors and legionaries, can be resolved easily. If the heroes are involved then the rules tell us what happened to them, too."
Skills, life events, etc are all here to flesh out the lives of your PC's and Warband does it in such an easy to understand & well laid out fashion that we find the world not as we want it. But it finds us asking the hard questions of our characters in quick & easy to follow succession. Paul Elliot has been designing games since the 90's and no where is this fact clearer then in Warband. Names, tribes, culture, is all here in lavish detail. Warband reads part game & part action film waiting to be sprung on players with sprawling wars with casts of hundreds. All of this comes in 2d6 action with the flick of a wrist to create your warrior or champion of your tribe. These are the warriors who challenged the legions of  the Vallum Hadriani.
You can also decide what era you wish to play in & what type of guerilla warfare you want to spring on your players. The information is all here for campaign play.
Do you want a druid capable of shape shifting, magickal mayhem, or subject to the whims of the Fey or the Wryd then that's here as well. Magick is as real as the blood around these men & women. The old gods should be respected & no where is this more evident then in Warband. The world shapes the druid to be a tool of powers beyond the ken of men. These are druids that you actually want to play that have meaning beyond their magicks.
The world of 43 AD  is described, clans are defined, the honor of these clans is outlined. This is a wild world, a warrior's world, & the world of Warband in detail. The author defines, shapes, and highlights his works easily in terms, conditions, & common sense rules. This is the same approach that we see in the  Zenobia rpg  that we  here in Warband. Casual writing that makes the history work & the fantasy elements however horrifying ( believe me they are) easy to deal with. 43 AD is a world that we want to game in. 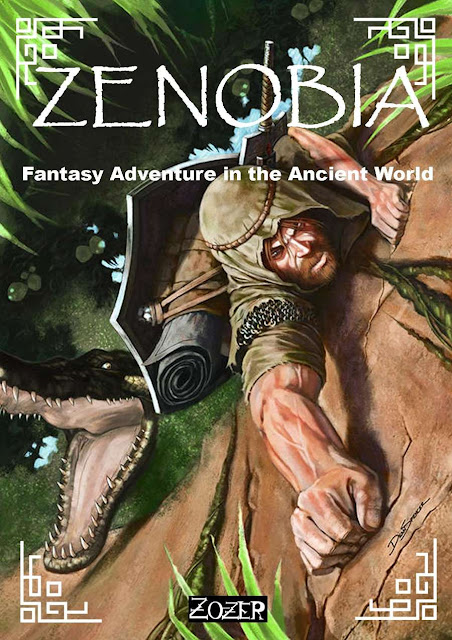 Warband takes place in a very alien world of the Roman empire where you are the resistance & from the ground up we are presented a game that is at odds with both itself & its surroundings. Warband is an rpg supplement is as much a love letter to it's subject as it as a game that you want to play. The details here are top notch. The works very well done.  The layout is solid & well done. The cartography is well done & maintained.
The subsystem for creating war with both the Roman forces & the clans is well done plus it hits the high notes in spades. This is a system that can handle itself & come back for more. The history is well thought out with the system providing the DM with the tools to handle everything from one end to the bloody other. This is a book for both players & DM's who want PC's that are 'just so' for raiding cattle, taking heads, & gaining honor for the clan! Top notch & highly recommended.
Posted by Needles at 6:39 PM