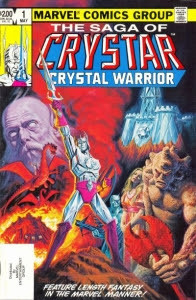 Way back in 1983 there was a comic book series that seems to have faded into the background of the pop cultural landscape. The other day I was looking into my comic bins and came across this cultural relic from the Mighty House of Marvel.
I'm speaking of course of Crystar Crystal Warrior one of a wave of comics that came out during the height of the sword and sorcery craze of 1983.
According to Wiki :
The Saga of Crystar, Crystal Warrior was a 1983 11-issue fantasy-based Marvel comic book with an associated toy line from Remco, consisting of seven figures, some vehicles and accessories.
The plot :
Years ago, The Demon Lord sent his demon armies to conquer the world of Crystallium. The King of Crystallium led the fight against the Demon Lord in the Chaos War, but he was killed during the war. The forces of Order then sent the wizard Ogeode and the Prisma-Crystal to drive away The Demon Lord's minions and the forces of Chaos. In his defeat, the Demon Lord made the "Prophecy of Chaos", that he would one day send another of his servants to divide the planet against itself and bring ruin to all.
After the end of the Chaos War, the wizards Ogeode and Zardeth visited two princes, the brothers Crystar and Moltar, who had to decide whether their people would ally with Chaos or Order. Crystar chose Order and its champion, Ogeode. As Moltar considered Chaos, their uncle Feldspar tried to convince him that Chaos was evil. Moltar, feeling that his uncle had always favored Crystar, became enraged and fought Crystar, injuring Feldspar in the process. Leaving them for dead, Moltar led his followers to the Fountain of Fire to find the wizard Zardeth and ally with Chaos.
Ogeode saves Crystar's life by merging him with the great Prisma-Crystal, rendering the prince's body into crystalline form. Similarly, at the Fountain of Fire, Zardeth magically transforms Moltar and his followers with the power of lava. Moltar and his magma men then attempt to conquer the city of Galax. Crystar and his warriors, feeling that flesh and blood would prove ineffective against the transformed armies of Moltar, selected an elite group to be transformed into crystal form like Crystar: Koth, Stalax, and Kalibar.

The weird thing was that Crystar never had a cartoon show, but there were a boat load of action figures, and he never had any appearances in any really major Marvel comic book series except Alpha Flight and a few of the Marvel second stringers appearances. They were great Marvel second stringers but still.
The comic book series was set parallel to the Marvel Universe and featured guest appearances by Doctor Strange, Nightcrawler and Alpha Flight.| 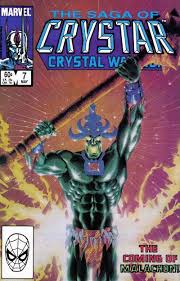 The comic only lasted eleven issues and there was a ton that Marvel was trying to do be hind the scenes with the property. It was a time when toy properties with synergistic multi-media marketing tie ins were the word. Remember this was the Eighties 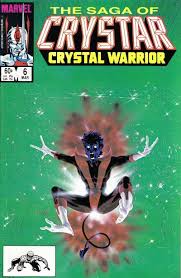 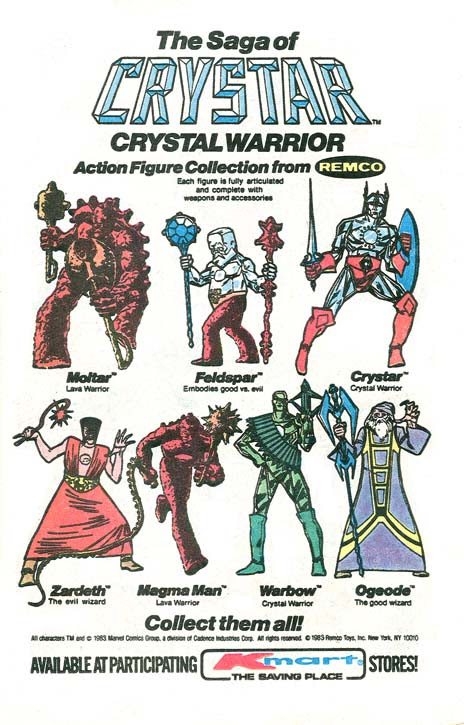 The following is a quick overview from Wiki :

Crystar Is weird sword and sorcery comic with lots of potential. There are elements here of the struggle of Law vs Chaos with warriors transformed into Quisi Elemental creatures from the pages of the Monster Manaul II or they might be giants. I've had these races as giants transformed by the powers of Law and Chaos.
In a recent Astonishing Swordsmen and Sorcerers of Hyperborea some of my PC's ran across Moltar and his crew. They counted as Fire Giants and if you take a look at the scale of the figure compared to Crystar. They're fire giants alright at least in the AS&SH universe.

Crystallium itself is a demi plane that shifts its position throughout multiverse. I had the Evil Elemental princes( from the Fiend Folio) try to take over the demi plane

Crystallium which caused an alliance among the forces of Chaos and Order. There are also loads of artifacts left over from the Chaos Wars still on the demi plane guarded by both Crystar and Moltar's minor minions. They're just begging to be taken. All in all most folks have forgotten about Crystar which gives the DM ample opportunity to trot out this relic world and its crystal inhabitants. The fact is that the these brothers are cursed to fight forever after all they're made from the very forces of Chaos and Order itself. What is thirty years to these poor souls.

On line support :
Every Thing You Ever Wanted To Know Crystalium
Crystar Himself
Moltar
Zardeth Chaos Wizard
Oegeode The Wizard Of Order
Once again this is a fan based entry and for entertainment purposes only. This is not a challenge to Marvel, its trademarks, copyrights, or anything of the kind. Crystar and its characters belong to their respective copyright and trademark holders.
Posted by Needles at 1:18 PM