"43AD is a gritty military-style game with a slice of dark horror running through it. Life is grim and the world of the native Britons is painted in dark and horrific colours. Britain is a place of fear and death, terrors and torments, and the Iron-Age tribes live with these horrors. Celtic priests, the druids, contain them in lakes and pits and forests. When the legions step onto British soil, they step onto a land of ancient horrors of which they (as yet) know nothing. Life, honour and warfare amongst the tribes is explained for players and GMs alike.

Characters are Roman soldiers, fighting for the emperor in a hostile land against the battle-hardened warriors of the tribes. This is the visible enemy, but beyond, should the Game Master wish to go there, lay the dark secrets of Britain, the night terrors, the death-bringing spirits of the wild, the night crawlers, the face eaters, the skinchangers and the rest of the monsters and wild things that infest Britain. " 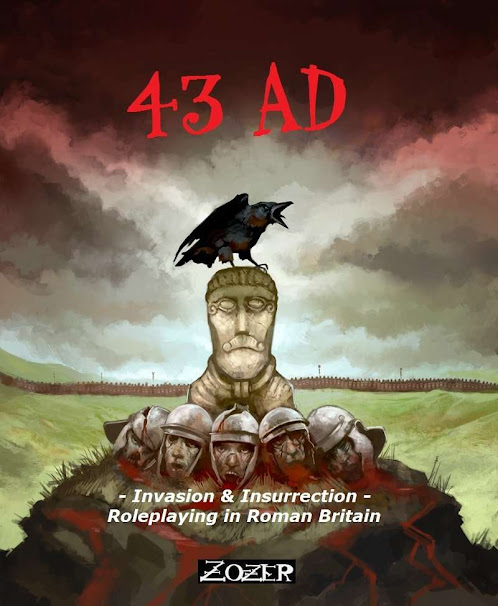 Let me tell you a little story, ages ago when I was little and sitting taking in the sights of a history book on Roman Britian bigger then I was. There was a picture of Hydrian's Wall.  And I vowed that someday I would not only visit it but understand it as well as the reasons behind it. In 2006 we did just that & connected with several family members. The thing that struck me on the English side of the wall was the weight of how much history there is there. Reading through Zozer Games 43 A.D. is full on like coming home for me. The familiar history  mixed with the wyrd in 152 pages & this  is a passion project for the author/designer. The amount of detail here is incredible from skill set ups for Cepheus Engine style ancient PC's to the details in weapons, civilization, to monsters the details are bold. Highlights for me include:
So without heistation I approached Zozer Games & we promptly sent a copy of  43 A.D.  & this book is on another level. Sure there are copies of other horror themed historical rpg's sitting on my shelf.  But is on another level without a doubt. This isn't to say that  43 A.D.
is completely overwhelming on its hisory or game details. Far from it, the game reads like a combination of deadly campaign, detailed rpg, & action movie waiting to happen. The combat is bloody, the system sings along in a bloody way, & this game screams to be played. The game feels like Zenobia another Paul Elliot creation where the legions of Roman meet the forces of the desert. 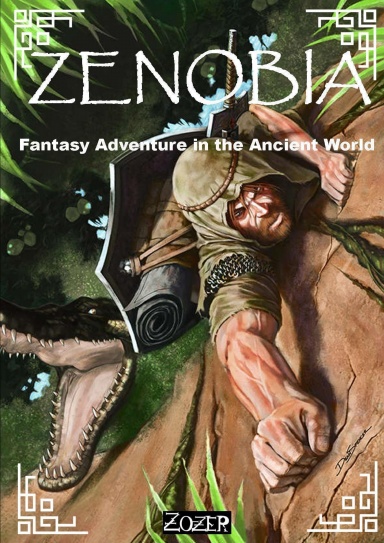 But  43 A.D. has the look & feel of Roman occupied  Britian with a horror film twist or two thrown in. And this is a deadly little affair of a game. The PC's are strangers in a strange land & they are far from home. And this is a cold, dangerous, lonely little world to have a PC die in. And no its not depressing but its incredibly dangerous.
But is   43 A.D.  worth getting?! In a word yes! This is a complete unto it's game & while other books are going smaller & smaller with Cepheus Engine rpg rules.   43 A.D.  takes this notion & kicks its teeth in to give the DM & his players a complete package for ten dollars! And its up to Zozer Games quality unto itself. So in a word yes   43 A.D.  is very much worth getting for three reasons, one this is a game about Roman occupied Britian done by a historian who writes history & techinical books for a living. Two the maps & cartography are gorgeous! And three the setting is not one that I'd ever want to actually live in & I say this with all due respect! The idea of being in the middle of no place squared surrounded with no modern medicine, no real way home, & surrounded by people who will take your head off? No thanks but to role play in this world from the safety of your table with 2d6 system done by Zozer games absolutely!