The Zaarg - A Seventies Kaiju Monster Menace For Cepheus Atom & the Barbaric! rpg Adapted From War Lords of Atlantis 1978

The zaargs are an invasive interstellar parasite Kaiju that came to Earth with the renagade Martian colonists who settled in the Bermuda Triangle. The Zaargs are armored creatures capable of adapting to a wide variety of atmospeheres & planetary conditions. These monsters are instinctively drawn to the works of Atlantis because of the psionic background noise of the power source. These things are heavily armoured & attack without mercy. . 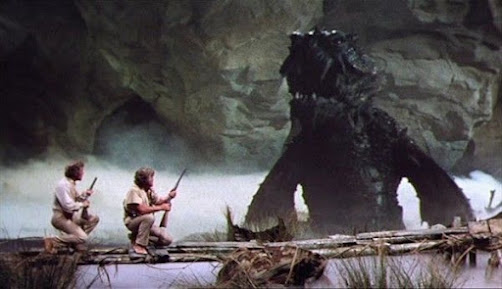 Zarrg's have a highly destructive nature. And they  can easily survive attacks that would fell lesser beings easily. Zaargs attack with two wickely sharp claws. Zaargs lash out with wicked clawed flippers that will smash anything that they can. The Zaargs are well armored taking in & creating an armored back & plate shell along both the upper & lower bodies. The Zaargs are considered the armored pest or transgalactic  parasites  among many of the oldest ancient interstellar races. The reason is that the Zaarg eats literally anything while siphoning off any energy sources that it can including occult energies. Zaarg are known for being extremely temperamental lashing out at any all targets that disturb them durig thier brief seventy two hour life cycle.
The Zaarg however can literally appear anywhere across space time where the Atlantians have trod. The Zaarg can develop from instellar spores borne by the star winds or by eggs left behind by mating pairs of Zaarg. Zarg have both male & female reproductive parts leading many scientists & men in authority to speculate if they are an ancient artificially created bio weapon species.

Regeneration -  will regenerate as a Troll see Sword of Cepheus for rules.

Enviromental Adaptability - The  Kuiju are able to adapt to a wide array of enviroments due to their incredible monster biology that would kill any ordinary monsters.
Energy Drain - The Zaarg have a unique ability to siphon off occult or a wide variety of energies draining power packs, spells, etc once per day. This is a line of sight ability with the Zaarg making a physical roll to sense the energies with its strange Kaiju adapted senses & then a combat roll to do the drain. The Zaarg can make no other action during this process.
The Zaarg's breed prolifically with a clutch of 2d6 eggs being produced every eight or so months. The Zaarg's grow to adulthood in 2 months after the first hatching. Zaarg's are always found where Martian Atlantian colonies are. They are  drawn to the occult tech energy sources of such colonies.
Posted by Needles at 6:43 AM