The boar thing Kaiju are ancient semi demonic war machines & seige engines created by the Hyperborean biomancers. They ran wild when the Hyperboreans were almost wiped out due  to the Green Death. They can be found in many places where Hyperborean armies were deployed across the planes & upon the bowl shaped world itself. They are deadly & very violent drawn to any violence or loud noises. They are ravagers who prey upon any protein or matter they can find to supplement the weird occult radiations coursing through their veins! 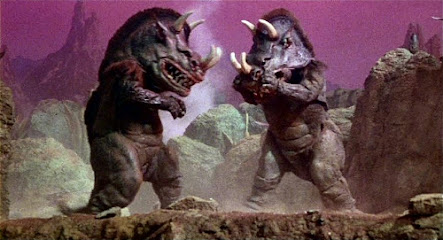 The boar thins are deadly combatants prone to trampling anyone or anything that gets in their path. These things have been known to trample & destroy entire villages when they get annoyed or bothered by some perceived slight. These Kaiju sometimes fight their own kind simply for the sake of boredom & malice. These creatures are highly unpredictable & best avoided by adventurers.

Boar Thing Kaiju are magical beasts & have the following specials:
Boar Thing Kaiju come under the following  rules for Kaiju; " All kaiju are Colossal, and have a space and reach of no less than 50 feet each. A bipedal kaiju typically stands between 100 and 200 feet in height; quadrupedal kaiju are half as tall. A kaiju’s size makes a battle against one challenging to run. At the scale needed to track tactical movement for Medium creatures, a kaiju takes up a massive amount of space."