Searching through my dream shattered sleep is often a weird at best & horrid experience  at worst. Overe the years there are one or two modules that bring home the station of Dungeons & Dragons to me. One of these is B2 Keep on the Borderlands by Gary Gygax. Everything about B2 feels like a set up by Clark Ashton Smith in his  Averoigne stories 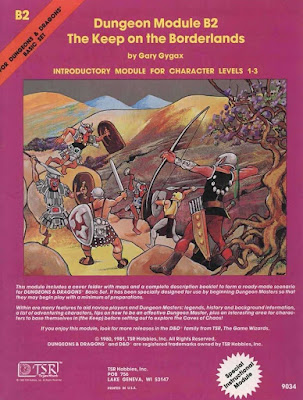 What if the humanoid hordes within B2 were gathering for another reason?! What if the Lovecraftian forces of the Caves of Chaos were about to send in the first force of an invasion?! Think about it for a second, hordes of humanoids in an ancient place of power waiting. Waiting for your adventurers to bust in?! No. I think they could be waiting to rampage across the threshold of worlds & into a modern Earth. And the prospect is  terrifying.
Oh but our modern fire arms, armies, etc. There are lots of ways that an evil cleric or wizard could & should exploit the situation. Now often in this series we've talked about the forces of Law & Chaos. Well the dark forces of caves of Chaos is perfectly suited to exploit this in spades. If we set B2 on The Wilderlands of High Fantasy then this becomes even more evident. That's right the Wildlands instead of Greyhawk. Why? Three reasons one the wilderlands is far more concentrated in its humanoid forces according to Judges Guild materials. Two the humanoids are motivated by the dark powers there for expansion. Three the modules present a world on the edge of barbarianism & expansion. That expansion is painful & ripe for exploitation. Think about it, Earth is perfect for the dark powers to expand into. The player's PC's might be dealing with supernatural investigation & are ill prepared for the coming of a whole army. The random encounters with the odd orc warrior or the gnoll scout in New Jersey could lead them on a trail of the moat house of T1-4 The Temple of Elemental Evil by Gary Gygax & Frank Mentzer. 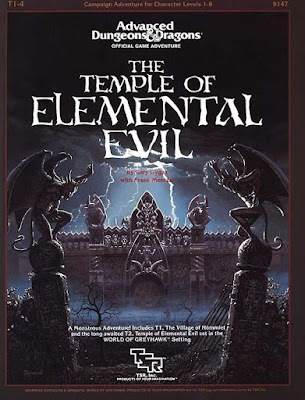 The fog of war might just be looming as the balance of power shifts and shifts again between Law & Chaos. This is something over the years that we've seen over & over again. The Earth's time or an Earth as the case may be might yield unexpected allies from across space & time. But we'll get into that next time folks.
Posted by Needles at 7:00 AM