Arduin fans this is it! "Vaults of the Weaver" delivers six modules designed and written by David Hargrave in one book.

Contains reprints of these items:

The Dungeon and Overland maps have been re-drawn and cleaned up--the same maps, just better looking."

So its been one of those weeks when the weekend hits its good to get together with friends. One of my friends is a phyisist & we talked. And talked. The fact is that he's a big fan of  Dave Hargrave's Arduin book & Science Fantasy in general. So over the last day or so we were talking over a couple of beers about the Nexus Gates. There are still one or two titles that Emperor's Choice has yet  to release in official PDF for Vaults of the Weaver. 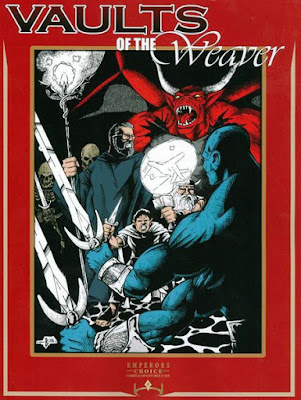 Now this collection of adventures highlighs several things about Mr.Hargrave. These are killer adventures & dungeons in many senses of the word. But once again Mr. Hargrave was way ahead of the curve. And in some ways too far ahead. These are high level & quite lethal affairs. Ages befor Dungeon Crawl Classics was even a thought Dave Hargrave was creating these. Being the 'dream weaver'. Dave Hargrave wove these adventures into the coheisive mythology at his own table. From all accounts that we've read. David A. Hargrave was a damn good dungeon master in the California style of Dungeons & Dragons in the Seventies. At his own table he wasn't a 'wild & crazy' DM per say. Sure there were a lot of fantastic elements.
When we come down to it?! By all accounts Hargrave was way ahead of the curve when it came to his adventure design. No this isn't nosolgia talking here. Living dungeons, alien hives adventure locations, magic artifacts capable of ruining lives, & much more all capable of challenging the gods are a part of Vaults of the Weaver. .
The worth of a collection of adventures is its contents vs utility.
The contents of Vault of the Weaver is interesting to say the least. The contents of the book are:

- and a couple of more books thanks to Paul Mosher:

Also included is the Tomb of D'Haera

This collection get's a huge nine on Rpg Geek's site & that says volumes to me as a dungeon master. DM Paul was discussing with me the fact that given the size of the  Arduin campaign setting there's some other factors to cosider from  Vaults of the Weaver:

Buttom line that we hop in the near future we see a release of Dave Hargrave's Vaults of the Weaver (2006) From Emperor's Choice  Games in PDF folks. More Arduin goodness coming up.