"These Great Old Ones...were not composed altogether of flesh and blood. They had shape...but that shape was not made of matter. When the stars were right, They could plunge from world to world through the sky.... When, after infinities of chaos, the first men came, the Great Old Ones spoke to the sensitive among them by molding their dreams; for only thus could Their language reach the fleshy minds of mammals.


This blog post is going to pick up right where the last one left off with Hawks & Moons - Cepheus Engine rpg & The Gerry Anderson Factor.

When it comes to pulling off a Sevenies U.F.O.television series \style Chepheus Engine campaign. One of the keys to this is  Michael Brown's Omega 99 campaign setting.  Omega 99 offers a moon with some interesting alien neighbors in the form of  the Edari, the Kahgg, and the Mecharchs.  Some great ideas as well to get the polyester sci fi  goodness underway. 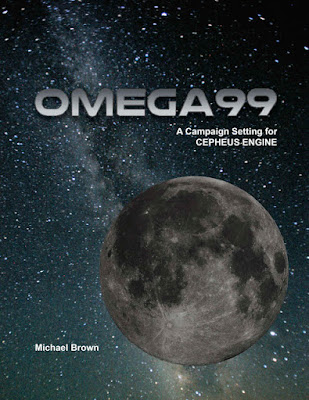 What if the intent wasn't simply a cultclassic TV show but the idea that this was deadly serious busines along the lines of the 1972 film   'Silent Running. Earth's moon get's wrench out of the orbit by higher dimensional powers. The Earth is hit with wave after wave of ecological disasters. Earlier the humans sent the Discovery one on a publicity expediation after monolith was found on Earth's moon. What if this is the third or forth contact with alien life forms. So the events of '2001 A Space Odyssey' were part of a longer chain of events in human history.
The  United States spacecraft Discovery One is bound for Jupiter.. This is as much a publicity stunt as it is an expediationary mission to Jupiter.  The alien signal came from the moon's monolith.  For the most part humanity doesn't have a clue as to what changes  have been wrought to those who were subject to its influence?!
The moon itself maybe ten or so years later is wrench from its orbit ala Space 1999. But if we assume that this is correct. Using the joint U.F.O. followed by '2001 A Space Odysssey' history , & then Space 1999. The wrap around  of Silent Running comes  hot on its heels. Then we've got a very Lovecraftian theme going on here indeed. So let's continue backwards to the Seventies for a moment or so. Let's say that in 1977 that humanity actually had contact with  aliens in ' Close Encounters of the Third Kind'. We have some idea who & what those aliens were. We may have no idea whom or what  those aliens served. The fact of the matter is that poor souls who left with the 1977 film's aliens are gone down a Lovecraftian rabbit hole. This is a view point that is even shared by other movie reviewers including the excellent 'The Scary Review Blog; "And we have to ask, what exactly do these aliens really want? If they’ve been abducting people for generations, what do they want with the one man crazy enough to have made it to Devils Tower? If they’ve been taking people all willy-nilly since before WWII, or even longer, well…it goes to say they probably already have a clear understanding of human anatomy. And if they can insert images and thoughts into our minds, well… this begs the question, how much more of us do they really need to know? To me, it all seems like a subjective test. A greater intelligence than our own giving humanity the equivalent of a SAT exam" 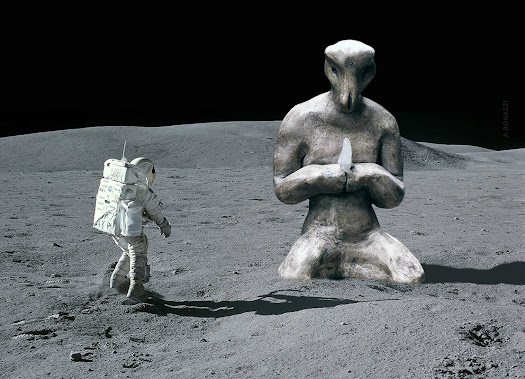 In Deuce of Clubs website's other fantastic little article titled 'Spacecraft or Lovecraft' he goes into the following; "An intriguing hypothesis has been suggested by Jacques Vallee, the real-life model for the character of the French scientist in Close Encounters of the Third Kind, and author of many books on the UFO phenomenon, such as Dimensions and Messengers of Deception. Vallee does not share Steven Spielberg's trusting view of the visitors, whom he believes are probably not visitors at all. Vallee has made a history-spanning study of stories of supernatural contact—Greco-Roman tales of sky chariots, Celtic stories of elves and fairies abducting children and mutilating animals, Joseph Smith's alleged heavenly visions, and apparitions of the Virgin Mary—and found that such experiences closely parallel the experiences of UFO contactees. It seems that the phenomenon currently known as the contactee experience is almost coeval with human culture. "UFOs have been seen throughout history and have consistently received (or provided) their own explanation within the framework of each culture," Vallee says. Stories of these visitors conform to the prevailing mythology or beliefs; the visitors become whatever we want them to be and tell us whatever we want to hear. Modern mythology having shifted from the magical to the scientific, it's only logical that popular culture now attributes such phenomena to scientifically advanced beings from space."
Could the events of 'Close Encounters of the Third Kind' have jump started the world of U.F.O.?! If these aliens were abducting humans since the beginning of time. And just before they go on their cosmic joy ride with the sciencetific  expermental anim ermm contactees. They warn the international monkey governments  about these other 'bad' aliens coming to harvest blood, organs, bodies, etc.

Now at the events at Devil's Tower Col. Edward Straker, is a lowly witness to lightshow & what not of 'Close Encounters'. He has time to think about these events. And becomes a part of an international  task force that mobilizes to move humanity's technologies ahead. He moves a head with the investments 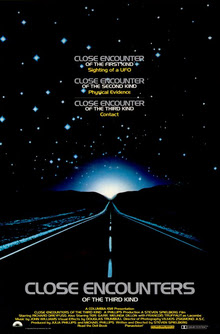 of Harlington-Straker Film Studios. But deep down he knows of the cosmic danger that these alien forces represent.
Now this moves the space programs of this alternative Earth ahead at warp speed. The space borne coolness of Orbital 2100 is in full effect. Humanity has the beginnings of FTL drives but they won't be ready for another 10 or so years. Then the other U.F.O.'s begin showing up. The UFO cults begin to flourish as well. Nasty little cells of proto occult terrorist cells serving powers beyond the ken of mankind show up. And terrorist actions such as mass bombings, etc. start to happen. Could all of this actually tie back into Professor Quatarmass & the The Quatermass Conclusion?!

If we move forward with the idea that these events propel Earth's technologies forward. And could help explain the hard line governmental stance of anything alien. If you think about it who can blame humanity at that point?! These alien forces have been showing up & taking humans for their own agendas.
And this something that we can use Attack Squadron Rosewell  for. A wide variety of alien craft & weirdness for the players to contend with. 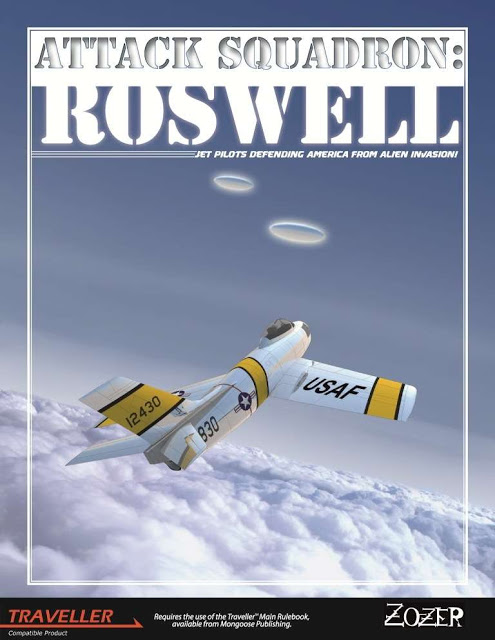 From here the big factor is the Earth's Moon & establishing a base there in 1980. The key here is the moon's military importance. Humanity by 1980 is wiped & wary, so existence of this moon base would be kept utterly secret. Again here its Orbital 2100 that is key to creating such an adventure location.

Humanity by the time its reached the Reticulian Empire of  'These Stars Are Ours' has utterly had it with alien influences. So that explains a bit of the flexing of the military might on humanity's part. The Fall of Mankind back down into Sol isn't hard to see. Hostile in my campaigns is Sevenities Sci fi humanity reaching for the stars again. 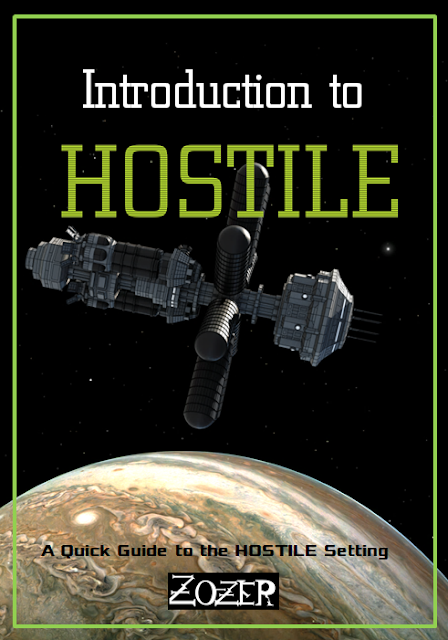 Note that the use of these videos are the subject to their copyright & trademark holders. This blog entry is for a personal rpg table top campaign & for educational purposes. This is not an attempt to violate the trade mark or copy rights of such holders. The above mentioned rpg authors are not responsible for the contents of this blog or its writer.