Rite of the Faceless Queen For Sword of Cepheus, World of Weird War II & Astonishing Swordsmen & Sorcerers of Hyperborea rpg

The rites of calling down the Mi Go have come down to us through age after age going back to before the first Ice Age. But in 1941 the Nazi expediation to the plateau of Leng called up something unexpected & soul destorying.
Blood, music, & sanity shattering mathematics allows the fungus to sense the ultra tellerite vibrations of the caster. The secrets of these dark sciences came from the mind of the gifted Italian occultist & archeologist Dr.Bonazzi. After his ground breaking work with the Nazi expeditions to the plateau of Leng in 1941. By this time  Dr.Bonazzi was in deep contact with Dr. Henry Walton Jones, Jr. & top men within the U.S. state department. Now everyone knows the sticky end Bonazzi came to after World War II after being smuggled to the U.S. during operation paperclip. Using the music of Prin's last opera the Nazi called up something unexpected in 1941. 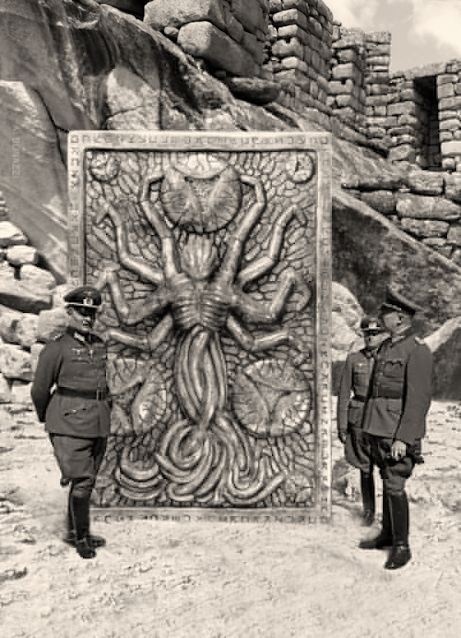 Artwork by Mr.Bonazzi used without permission. Don't forget to visit his incredible blog here. Mr.Bonazzi & I have been friends since D20 Call of Cthulhu release ages ago.

The Nazi working with Dr.Bonazzi  along with his translations of the Leng Hisi monoliths called down the Mi Go. But something imical  came with them. Something called the Faceless Queen appeared with the Mi Go.  She ate three of the Nazi officers as payment for summoning it.

Rite & Summoning of  Faceless Queen
Circle: 8th (Black)
Range:75 Meters
Duration: Special
The summoner offers a small amount of human brain matter in a degenerae circle of communing  & uses an alien  tune from ancient MU recorded by Prim in the 1600's. Upon a flute made from the femur of an Ice Age unicorn this tune must be played while concentrating on the sigils found on the faceless queen's monolith. Within 3 rounds the spaces in between reality will shift & the faceless queen will itself will  appear demanding two brains of Deep Ones as payment for summons. The queen will be accompanied by two Pretornian Mi Go warriors capable of carrying out her unholy will. If the offering is not made the queen will carry off two humans present as payment. Time will seem to slow down as seconds stretch into hours.

It will instruct the summoner in the ways of the spaces in between allowing the summoner to teleport from place to place. The effect also allows the summoner to seemingly slow down the aging process. But the poor fool is actual caught between moments outside of time & space. This means that they are actually vulnerable to any pan dimensional entities & horrors without the proper protections. Not to mention subject to the weird radiations of the spaces inbetween. See the fate of  Hans Greubal coming up

Rite of Faceless Queen
Casting Time:3 hours the caster must play the compositions of Prin while visualizing the Mi Go sigils
Material Component: A bit of human brain matter & two Deep One brains as offerings  for the queen.
Casting Location: Plateau of Leng
The Queen will appear before the summoner  with her Pretorian Mi Go guards 1d4 of them. It will instantly slow time around the caster. The queen will then teach the caster the abilities of the 'Spaces In Between' allowing the caster to teleport without error. This will cost the fool 2 permenant points of wisdom as sanity shattering visas of reality are lit into the caster's mind. A save vs wands will counter this but the save must be made again. The caster will gain 2 points of constitution & will not age normally their life space is now 1d200 years. But they are vulnerable to all kinds of pan dimensional horrors such as dimensional shamblers!

World of Weird War II  is available right here & we've got a review coming up on this blog! 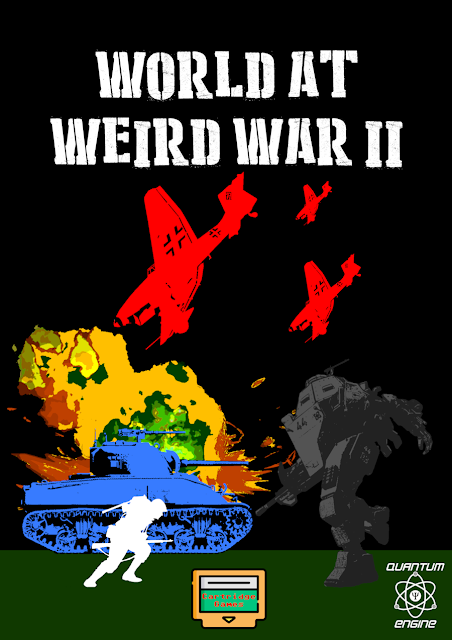