Created ages ago on the plane of  Crystallium,  Crystar the Crystal Warrior  was one of two twin brothers who sided with the forces of Order  through the second Chaos Wars. He & his followers were turned into elemental Order warriors servants of Order forever more by the wizard of Order &  light Ogeode . Crystar as a champion of Order  have roamed the planes in the service of Order  when & where needed. Crystar's twin brother Moltar  serves the forces of Choas & always seems drawn to oppose his brother. Crystar's  elemental queen of  order & good Ika is never far from his side. The warriors of Crystar  are often seen acting as mercenary muscle for the forces of Order throughout the planes. Crystar  is a 9th level fighter & champion of order with all of the abilities appropriate to his level. Crystar's forces   act as  3rd level fighters. Warbow Crystar's champion of order acts as his right hand & scout (See Warbow's blog entry). 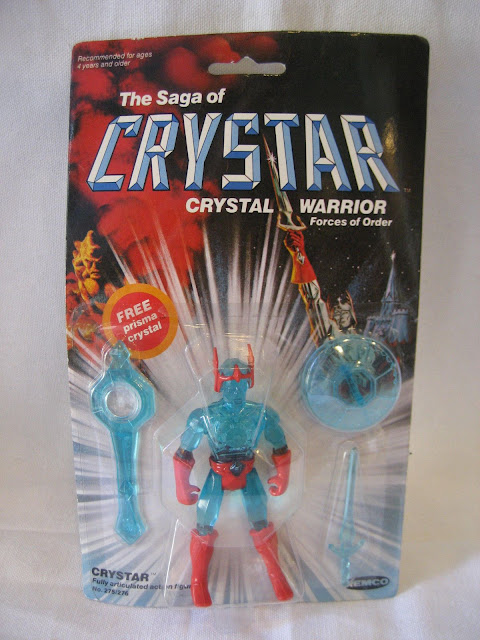 Because Crystar as a champion of Order,he is so attuned to & apart of the plane of  Crystallium he is mystically infused with supernatural power. Crystar  is sought out by dark wizards & their followers to be rendered down once slain as a fine mystically powdered drug. This horrid occult infused  drug adds +2 to all combat rolls, -3 on all intelligent & wisdom rolls. This occult drug  allows a dark wizard to cast spells at 2 levels higher then their actual level.  The price is terrible indeed the wizard or follower loses one point of wisdom & constitution permanently under the occult influence of this drug. Such users of this drug are subject to 1d4 chaotic mutations as well. The drug is worth 100 gold pieces for each dose to dark wizards & their followers.
This however is not the end of Crystar himself. Any & all reminds of the champion can be gathered & taken to a powerful wizard of light with access to the entity that lives beyond  the Prisma-Crystal mirror. The wizard must be of 10th level or better, a dangerous occult ritual is performed & Crystar shall be returned to life to fight another day.